The celebration for the 54th anniversary of Egypt’s Aswan Dam have been overshadowed by concerns over water shortages because of the Ethiopian project. 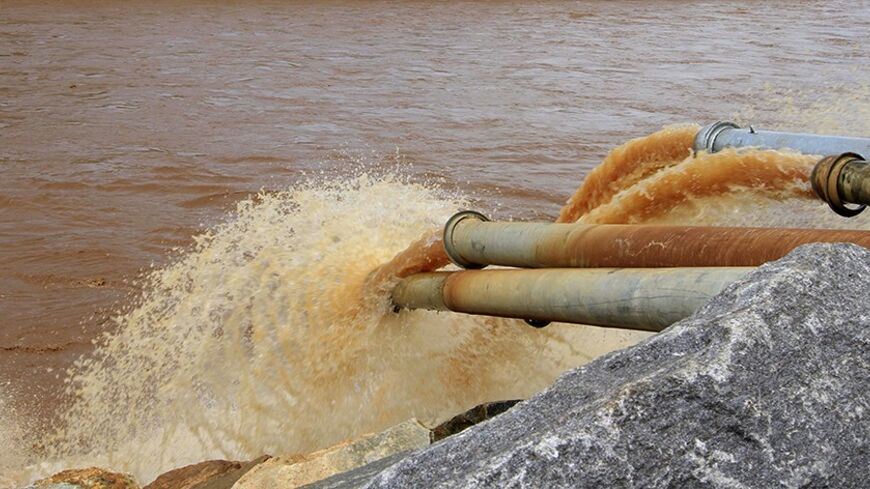 Water gushes out from pipes by the construction of Ethiopia's Great Renaissance Dam in Guba woreda, some 40 kilometers (25 miles) from Ethiopia's border with Sudan, June 28, 2013. - REUTERS/Tiksa Negeri

Each year on Jan. 9, Egyptians celebrate the anniversary of the 1960 construction of the Aswan Dam, during the reign of late President Gamal Abdel Nasser. But this year’s 54th anniversary was quite different, tinged with fear about the dangerous effects that the Ethiopian Renaissance Dam — intended to be built on the Blue Nile — would have on the operations of the Aswan. The latter might be put out of commission for up to two years.

The Egyptian press substituted its hosting of surviving Aswan Dam builders and broadcasts of patriotic songs about its construction with discussions of the Renaissance Dam crisis and its deleterious effects on Egypt’s water supply, as well as its repercussions for the electricity output of the Aswan Dam. An emergency meeting of the Egyptian National Defense Council was convened under the leadership of interim President Adly Mansour to discuss the implications of the crisis and ways to minimize the Ethiopian dam’s negative effects on Egypt.

The various warnings by experts about the dangers of the new Ethiopian dam have begun to cause panic among Egyptians, to the point of belief that the Aswan Dam will collapse once the Renaissance is completed. Alaa al-Zawahiri, a member of the Egyptian National Panel of Experts studying the effects of the Renaissance Dam, believes as much. In many press and television interviews, Zawahiri has said that Ethiopia’s construction of a dam able to hold 74 billion cubic meters of water was a catastrophe for Egypt, which would wind up losing 60% of its agricultural land. He added that a possible collapse of the Renaissance Dam could lead to the collapse of the Aswan Dam, in effect devastating all of Egypt.

Operating the Ethiopian dam in fact would lead to extremely dangerous and devastating effects on the Aswan Dam, according to Mohamed Nassereddine, Egypt’s former minister of water resources and irrigation. Nassereddine told Al-Monitor, “The Aswan Dam will completely cease to operate for two years after the Renaissance Dam reservoir begins to be filled up. Once that reservoir is filled to its 74 billion cubic meter capacity, the water depth at the Aswan Dam will continue to decrease and will not surpass 160 meters during the flood seasons, in the best of cases. In turn, this will reduce its electricity-generating capacity by 30-40%.”

Nassereddine indicated that major international entities had an interest in exacerbating matters as part of the political struggle for leadership and influence in Africa. According to the former minister, this conspiracy against Egypt began in 1956 with the tripartite aggression, following Nasser announcing his intention to build the Aswan Dam and nationalize the Suez Canal. At the time, the United States sent experts from its Land Reclamation Office to study building 33 installations on the Nile to thwart the plan to build the Aswan Dam and deprive Egypt of its water quota. These experts submitted their report in 1958, and the plans remained unfulfilled until the current difficult period of Egyptian history.

Speaking to Al-Monitor, the president of the Aswan Dam Builders Association, Saad Nassar, criticized what he called Ethiopian intransigence reflected by the imposition of near-complete secrecy on the details, studies and plans pertaining to the dam project. According to Nasser, this is done in an effort to hide, until the last minute, the project’s true capabilities and the actual quantities of water that will be taken from the Aswan Dam’s normal flow once the Renaissance Dam is put into operation. He stressed that the Aswan was constructed at a time when circumstances protected it from such conspiracies, as reflected by the old international treaties that governed the actions of countries bordering the Nile.

In an interview with Al-Monitor, Minister of Water Resources and Irrigation Mohamed Abdul Muttalib said, “Egypt will endeavor on all levels to foil this threat against the Aswan Dam and its water quota. Talk about the Aswan Dam being put out of commission is worrying, and matters will not reach this point because the dam symbolized the struggles of the Egyptian people. It was ranked as the No. 1 project out of 122 of the world’s most important projects [according to an international report released in 2010]. It brought Egypt many benefits and added to the country’s strategic water reserves following a long period when floodwaters uselessly flowed into the Mediterranean Sea, and only 5 billion cubic meters were successfully held back.”

The minister added that on the anniversary of the Aswan Dam’s construction, he wanted to assure all Egyptians that operations of the dam would be safeguarded. According to Abdul Muttalib, this is evidenced by Egypt’s refusal to complete the latest meetings in Khartoum because of Ethiopia’s insistence on not guaranteeing Egypt’s water quotas and the continued effective operation of the Aswan Dam once the Renaissance Dam becomes operational.

Despite all these governmental promises to prevent Ethiopia from threatening Egypt’s water quota and the structural integrity of the Aswan Dam, concerned Egyptian citizens remain worried about losing one of the most important of Egyptian national projects, one that is so closely tied to the memory of their late president.