Muharrem Yilmaz, chairman of the Turkish Industry and Business Association, had accused the prime minster of imposing tax penalties against political opponents. 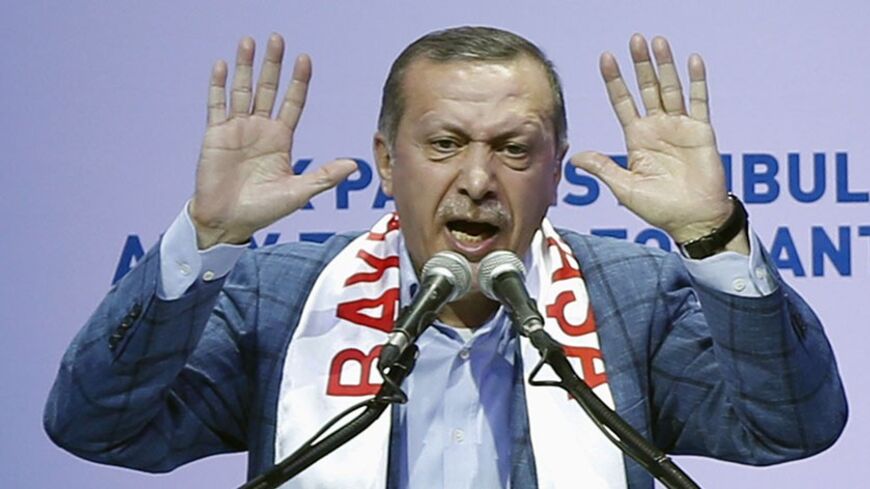 Muharrem Yilmaz, the chairman of the Turkish Industry and Business Association (TUSIAD), which has the largest share of revenue, employment and taxes paid to the state out of Turkey’s private sector, gave a speech that incensed Prime Minister Recep Tayyip Erdogan in the organization's 44th General Assembly in Istanbul on Jan. 23. Among the things he said:

“A country where the supremacy of law is not heeded, where judicial mechanisms don’t operate with EU norms, where the independence of regulatory institutions is tainted, where there is pressure on companies through tax penalties and other kinds punishments, where regulations on tenders are changed regularly … it is not possible for foreign capital to come to such a country. We owed our affluence that has been growing over the past years to making up for our savings deficit by transferring resources from abroad and to our attracting of investments. Once we lose this drawing power, we will face the risk of regression of our prosperity level.”

Erdogan responded the next day by accusing Yilmaz of “treason against the country.” He said: “The TUSIAD chair cannot say, ‘Global capital won’t come to such a country.’ If he said that, then that is treason against this country. After you said that, with what nerve are you going to invite the ministers of this government to TUSIAD? With what nerve you will come to this prime minister and his government to solve your problems regarding your investments?"

Yilmaz complained that the "pressure applied to companies with tax penalties and other kinds of punishments” will deter foreign investment. Though Erdogan responded to TUSIAD with harsh label of "treason," he nevertheless validated Yilmaz’s criticism in his retort. Erdogan implicitly told TUSIAD, “From now on we won’t assist you, but will impede you.”

But Yilmaz’s warnings should be taken seriously. He and TUSIAD are not known for being highly politicized. It is worth considering what he says.

If in a country, contracts are not guaranteed by law and are vulnerable to arbitrary attitudes and politically motivated decisions by the authorities, if capital groups are treated according to their affinity for the powers that be, if the government can be excessively protective toward and rewarding of some groups while punishing others, then of course needed foreign capital will not come.

The way for Turkey to achieve a sustainable growth rate by financing its current deficit is to make the country attractive for direct foreign investment. That in turn requires Turkey to have a properly functioning legal system, properly and justly operating independent institutions, good governance, a stable democracy and a free market — in short, to be predictable. Authoritarian and arbitrarily governed countries first lose their predictability.

It is also not a coincidence that TUSIAD’s warnings were voiced following the Dec. 17 bribery and graft investigation that led to a dramatic escalation in the AKP-Fethullah Gulen Movement war. The government’s tendency to use its financial auditing powers to influence capital groups and opposition politicians it doesn’t like gained momentum after that date.

The latest example came on Jan. 17, when the bank accounts and assets of Mustafa Sarigul, a candidate for mayor of metropolitan Istanbul and a member of the main opposition Republican Peoples Party, were impounded by the Saving Deposits Insurance Fund (TMSF) 73 days before the local elections on grounds of a $3.5 million credit debt from 16 years ago. TMSF is a state institution said to operate to protect the rights of depositors.

Istanbul is the most critical city of the March 30, 2014, elections, which are becoming a vote of confidence in the government. The opposition has only one credible opponent facing the AKP, and that is Sarigul.

Bank Ekspres, which opened a line of credit to Sarigul, was seized by TMSF at the end of 1998, when the bank experienced financial difficulties. Since then, controlling shares of the bank have changed hands twice. Now, after being ignored for 16 years, this credit debt, which reportedly totals $8 million with interest, has become an issue on the eve of the elections.

On Jan. 19, Sarigul said, "The opponent is playing with fouls [unfairly]. A state institution is operating like a local branch of a political party.”

When he visited Milliyet on Jan. 21, Sarigul said, "Our lawyers have asked when this credit was received and by whose signature. They didn’t show us anything. So we are going to court. There is no credit that we have used.” It is certainly a bizarre situation that needs explanation.

It is also interesting to recall how Erdogan used to target capital groups and political opposition his party did not like and unleash the state's power against them. This is what happened with Sarigul. Erdogan had hinted as recently as Dec. 26 that some files against Sarigul could emerge during the election process.

The same situation has emerged concerning the Koc Group, which has been subjected to one tax penalty after another. The Koc Group, the largest capital group of Turkey, attracted the ire of Erdogan during the June 2013 Gezi Park protests when the nearby Divan Hotel it owns opened its doors to those escaping the pepper gas and brutality of the police.

Erdogan perceived that as a challenge and accused the Koc Group of being accomplices to the protesters. Alluding to the group June 17, he actually said, "We know those who cooperate with terrorists and accommodate them in their hotels. We will settle accounts on this. Now we have an interest lobby emerging.”

We all discovered how that account was be settled when tax audit teams from the Ministry of Finance accompanied by police raided the Koc companies.

Then the planned construction of six Corvettes for the Turkish navy — the tender for which the Koc Group had won — was canceled Sept. 27.

All this was followed by record-level tax penalties against the Koc Group. On Dec.13, Koc's Yapi ve Kredi Bankasi, was fined $56 million, followed on Dec. 17 Tofas (Fiat), the largest automotive company in the country, with $29.3 million. The last to pay its share was the oil refinery Tupras attached to the Koc Group, penalized with $179.1 million.

Mustafa Boydak, the president of the Chamber of Industry of the Anatolian industrial city of Kayseri and a well-known conservative industrialist, denounced the tax audit of the Koc Group and called on the government "not to become party to the business world and not to treat the companies that carry Turkey as an enemy.” The government clearly didn’t appreciate Boydak’s call and responded with a tax audit of the Boydak Holding group of companies.

As part of the AKP-Gulen war, a bank and a mining corporation known to have ties to the Gulen movement were also targeted. Some public corporations led by Turkish Airlines and private companies with ties to the government withdrew 900 million lira ($391 million) of deposits from Bank Asya, recognized as the Gulen movement's bank, on the same day without waiting for the deposits to mature, and put the bank in a tough bind. Bank Asya was saved from going under when companies and businessmen affiliated with Gulen deposited the same amount of money.

The Cukuralan gold mine, operated by the Ipek Koza Group that also owns the pro-Gulen newspaper Bugun and the Kanalturk TV station, was closed down Dec. 31 over "missing documents."

The first allegations of the AKP government using tax penalties as a political weapon came out in 2008, when the Dogan Media Group was openly targeted by Erdogan and fined $1.6 billion. While intimidating the opposition with financial audits and tax penalties is distancing Turkey from a state of law, it also increases the legitimacy deficit of the government.