Elif Shafak: 'Turkey is a country of collective amnesia'

In an exclusive interview with Al-Monitor, acclaimed novelist Elif Shafak discusses her new book, literature, politics and identity in Turkey. 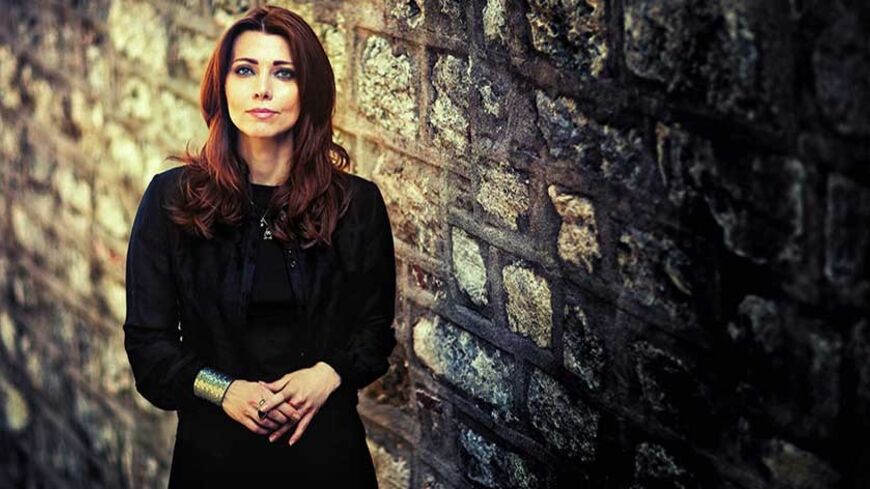 To my delight, Elif Shafak, an established Turkish author, columnist, speaker and academic, spoke exclusively to Al-Monitor about her newly published book in Turkish (to be published in English by Penguin in autumn 2014), on art and politics in Turkey and the region. With 13 books, nine of which are novels, published in more than 40 countries, Elif Shafak is one of Turkey’s best-known authors in the world, but also an active political commentator, columnist and public speaker.

Al Monitor:  In this latest novel, set in the 16th-century Ottoman Empire, you write about Istanbul of the time as a cosmopolitan, diverse place, and you depict lives of various types of people who live in it: from sultans to slaves. One of the main characters you talk about in the book is Mimar Sinan, the architectural master of the Ottoman period. What new did we learn about him or his works, and the process of art production at the time?

Shafak:  My new novel is centered on a white Indian elephant sent to the Ottoman sultan as a royal gift. This exceptional animal is put to work in the construction of the magnificent mosques we know today, such as Suleymaniye or Selimiye. Hence, we meet Sinan, the greatest architect in the Ottoman Empire. As the story unfolds we get to meet gypsies, Sufis, women, criminals, prostitutes … all the characters that Turkish official historiography tends to ignore and marginalize. I tell the story of the architect and his closest apprentices. Sinan was amazing not only as an architect and artisan but also as an urban planner. For him, it was important to protect history, respect the environment before starting a construction. There is an interesting chapter in the book where he razes the hovels illegally built around the Hagia Sophia. He is lambasted for that. They say, “How can you protect an infidel’s temple?” But Sinan equally respects churches, synagogues, mosques and the soul of the city of Istanbul.

Al-Monitor:  Let’s come back to the present. Turkey’s neighborhood has always been a troubled one, and regional instability naturally affects the country. But, what about art? Can and should politics and art be discussed separately?

Shafak:  If you are a Turkish author you do not have the luxury of being apolitical. You cannot ignore politics if you care about what is happening in your country and in the world, that is. I am not apolitical. There are things that matter to me deeply: democracy, human rights, women’s rights, minority rights and freedom of speech. That said, politics cannot and should not be the guiding force when you are writing a novel. I think this is a very important distinction. My novels have political repercussions. I deal with themes such as Armenian-Turkish conflict or incest or rape, things that are taboos in my country, but even when I deal with such themes my primary and only guide is literature.

Al-Monitor:  The status of both state and municipal theaters is in limbo after Prime Minister Recep Tayyip Erdogan suggested last year that they should be privatized. Many artists protested state theaters’ eventual closure, though the government claimed only “the redefinition of the state’s role” so that “the production of culture should be 'open to competition.'” How do you feel about this “restructuring and modernization of the state’s art production”?

Shafak:  There is a lot of tension at the moment in Turkey and lack of trust on all sides. Over the past years, the government has unfortunately made statement after statement to fan the flames of polarization and increase the fear that individual lives might be under threat. The prime minister talked about abortion being a murder or how many children Turkish women should have, several politicians talked about what is proper art and what is not. … In such an environment, women and artists feel  threatened. Both art and literature need freedom to thrive. They need autonomy. It is not up to politicians to say what is art and what is not art.

Al-Monitor:  Turkey has long been stressed by political tension between religious conservatives and secular nationalists, the latter also known as the Kemalists. Yet, we have lately witnessed a new kind of tension between the religious conservatives themselves. An Islamic intellectual, Sibel Eraslan, a renowned novelist and a columnist for the conservative daily Star recently presented an interesting perspective on re-evaluation of benefits of secularism for Turkey. What are your views on this?

Shafak:  Secularism is a sine qua non. If there is no secularism there cannot be full-fledged democracy. I am hoping that this turbulence will make everyone understand the importance and vitality of secularism. That said, the previous Kemalist interpretation was problematic, too. Top-down modernizations always create a backlash. Kemalism was an elite project. There were good things that should be applauded (like women’s rights) and negative things that should be criticized (like the nationalism that went hand in hand with it). In Turkey, it is so easy to swing from one extreme to the other, to be from “this camp” or “that camp.” I find this so unhealthy. I don’t like collective identities and identifications. We all need to become individuals and discuss things calmly. There is too much masculinity, too much aggressiveness, too much anger in Turkish politics. We urgently need a new discourse, a new mentality.

Al-Monitor:  In one of my previous articles, I wrote that in Turkey, “Group identification and solidarity are essential determinants of one’s being, as perfectly portrayed by the proverb 'Who escapes from the herd is carried off by wolves.' This sort of strong attachment to groups in Turkey makes schadenfreude [pleasure derived from another person’s misfortune] widespread and worrisome.” Again, the latest riffle between the conservatives demonstrates the intensity, thus the danger, of such strong group identification in Turkey. This is politics, but it affects everyone. What is the role/responsibility of artists, writers and intellectuals with the public?

Shafak:  Art and football, strangely, are the only areas left in Turkey where people across the board can still meet and communicate. Otherwise, Turkey is a society of glass ghettoes and walls of prejudices. We are deeply polarized and divided into islands that are incapable of talking to each other. I have a diverse readership. Among my readers there are conservatives, liberals, Kemalists, leftists, feminists, Sufis … amazing diversity, which I treasure. People who don’t break bread together can still read the same book. I want to go beyond identity politics and its narrow-mindedness. I want to transcend these artificial boundaries that day-to-day politics keeps drawing in front of us.

Al-Monitor:  Unfortunately, the current situation suggests that either there were bad teachers to learn from, or bad students who took no lessons from a troubling past. In your latest book, you also touch upon this sort of master/mentor and apprentice relationship. Tell us about that kind of relationship from your latest book.

Shafak:  I think societies that have a poor record in democracy also tend to be societies of collective amnesia. Turkey is a country of collective amnesia. Our historical consciousness is scant and therefore we cannot learn lessons from history. The past is important. You should not be trapped in it. But you shouldn’t be ignorant of it either. In my novels, I try to incorporate memory with story. I do this in two ways: by using old (and new) words. I am fond of Ottoman words, Sufi words … and the themes I deal with. Literature is an attempt to bring back memory and responsibility and understanding and empathy.

Al-Monitor:  Ultimately, mentorship is about transferring knowledge and investing in future generation, with no fear of delegating, sharing and losing power. How do you feel about the situation regarding mentorship/apprenticeship and power sharing — at least in Turkey and the region?

Shafak:  Authoritarianism is the biggest problem in developing democracies. It is a condition that affects everyone in power, sometimes even regardless of their ideological positions. So, for instance, Kemalists turn out to be authoritarian. Conservatives who replace them equally if not more so. Then social democrats can tomorrow do the same. Because we have not internalized pluralistic democracy in lands such as ours, politicians easily become authoritarian. That is why it is of crucial importance to have solid checks and balances and to have a diverse, free media.

Al-Monitor:  When the ruling government in Turkey came out with the new democratization package in October 2013, you stated that it was not enough. It seems that what you wrote in The Guardian is today valid, not only for Turkey, but for many societies across the world. ["Society has changed: Turkey's people are changing faster than its politicians. And the gap is increasingly visible. These reforms do not embrace the whole of society, giving the impression that some citizens are being favored and others forgotten."]

On that note, considering we recently entered the new year, what are your thoughts on Turkey in 2014? Leave us with your own message from the book, if applicable, as well.

Shafak:  Turkey has a large, young population. Turkey’s women are not passive. Long gone are the days when we used to believe we were a mass of undifferentiated individuals and everyone in Turkey had to automatically be a Turk. People can now say or at least, they do want to say aloud, “I am an Alevi, I am a Kurd, I am an Armenian, I am Jewish, I am gay, I am a pacifist and so on.” … The differences that were swept under the carpet in the name of uniformity are now visible and irrepressible. This might seem scary at first glance but it is the only way to true democracy. Diversity is beautiful. Diversity is to be celebrated. Top-down uniformity and sameness are not conducive to democracy. The important thing is to manage to create common values of coexistence, empathy and democracy. Will we be able to do that? This is the greatest test that Turkey is going through at the moment. But it is a test that is relevant for the entire world.