Talks between Cairo and Addis Ababa concerning the construction of the Renaissance Dam and Egypt’s rights to the Nile water have stalled, while Egypt remains preoccupied with internal crises. 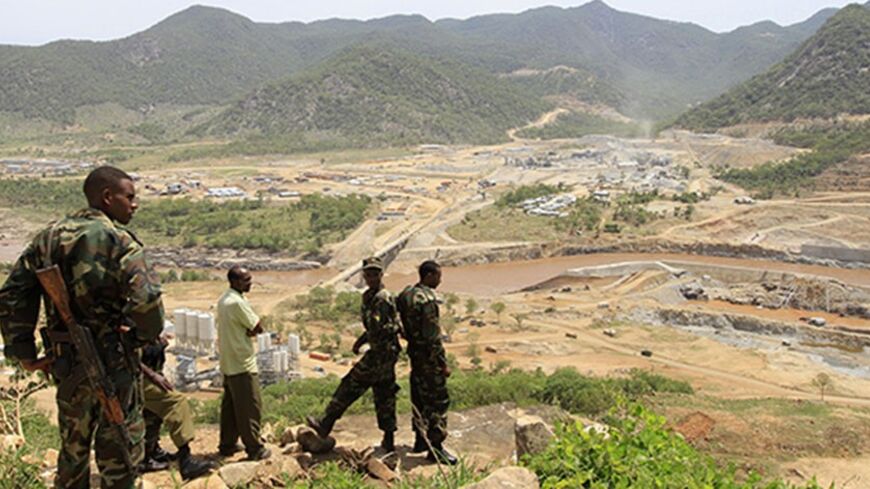 Technical negotiations among water ministers from Egypt, Sudan and Ethiopia have reached a dead end after all parties refused the proposals set forth to solve the crisis that revolves around the repercussions Ethiopia’s Renaissance Dam have on Egypt’s water security. These repercussions were discussed during three rounds of negotiations in the Sudanese capital Khartoum.

The third round of negotiations held in Khartoum on Jan. 4 — and attended by technical delegations represented by water ministers from Egypt, Sudan and Ethiopia — did not yield any clear results. Egypt withdrew from the meeting, describing the Ethiopian stance as “intransigent,” as Ethiopia refused the Egyptian proposal that ensures Egyptian water security, as noted in a statement issued by the Egyptian Ministry of Water Resources and Irrigation.

Al-Monitor secured a copy of the statement, which stated: “The dispute between Egypt and Ethiopia during the negotiations is related to two points. First, Ethiopia refused the participation of international experts in the new mechanism put in place to follow up on Ethiopian studies about the consequences of the Renaissance Dam. These studies will be conducted in accordance with the report of the international committee. Second, Ethiopia refused to discuss the document on 'principles of confidence-building' between the countries of the eastern Nile basin — namely Egypt, Sudan and Ethiopia. Egypt proposed this document to provide guarantees for the downstream countries against any negative effects that may be generated from the construction of the dam.”

In a phone interview with Al-Monitor, Egypt’s Water Minister Mohammed Abdel Moteleb said: “We tried to set forth more than one initiative to build the trust Ethiopia always talks about when promising not to cause Egypt any harm. However, we will not attend or participate in any technical negotiations concerning the Renaissance Dam until we make sure Ethiopia is proposing genuine initiatives that are in line with the Egyptian view, so that these meetings will be meaningful.

“Egypt has concerns and reservations over the Renaissance Dam. It is not logical to build a dam that big without completing the technical and environmental studies required by the international committee. Ethiopia agreed to these studies and signed [the committee’s] final report.”

He went on: “Egypt agreed on attending the three rounds of negotiations, so that it could not be accused of rejecting cooperation. We are always striving [to hold] a dialogue that is based on the principles of not causing harm and creating benefits for all parties. Currently, we do not have the luxury of giving up any drop of water from Egypt’s share of Nile water.”

An informed Egyptian security source concerned with the issue of the Nile basin told Al-Monitor: “Egypt will follow new courses to solve its crisis with Ethiopia in regard to the Renaissance Dam. It will adopt measures to push the issue forward on the international level. Egypt will not accept for its historical share of the Nile water, which is preserved by agreements and provisions of international law, to be diminished.”

“We do not rule out [the possibility of adopting] any technical, political or security measures to solve this crisis. We are waiting for the referendum on the constitution to be over. After that, we will launch a series of official and nonofficial movements,” the source affirmed. He pointed out the “possibility of referring to international courts and filing a claim with international institutions, such as the UN, to preserve Egypt’s rights.”

A diplomatic source, closely tied to the Egyptian Cabinet, told Al-Monitor, “Egypt has already launched diplomatic movements to convince donor countries to stop the financial aids serving the construction of the dam until it is assured that it will not harm Egypt.” The source affirmed, “This campaign will be put in focus after the completion of parliamentary and presidential elections, and once relative stability has been achieved.”

Interim President Adly Mansour held a closed meeting with the National Defense Council on Jan. 8. The meeting was attended by Defense Minister Abdel Fattah al-Sisi and Prime Minister Hazem el-Biblawi, who discussed the crisis of the Renaissance Dam and the deadlock surrounding the technical negotiations. The council reiterated the importance of “not wasting the water rights of Egypt and not accepting any violation against Egyptian national security.”

Former Water Minister and Nile Basin Studies Unit head Mohammad Nasreddin Allam, told Al-Monitor, “We are currently drafting an international claim comprising five parts, which will be filed to donor countries, international institutions and organizations entitled to settle this dispute. Such a dispute can threaten peace and security in the East African region.”

“The memorandum will comprise a legal part documenting the historical rights of Egypt to the Nile water, and another part stating the Ethiopian violations of the law and international agreements, after it constructed a large dam without taking into consideration the safety of downstream countries. It will also include a call to form a fact-finding committee to prove the dangerous impact of the dam on Egyptian water security, as stipulated by the regional dispute settlement mechanisms, the UN pact and the African Union Peace and Security Council,” Allam added.

Allam also affirmed, “The memorandum will call for the immediate halt of all construction works at the site until the fact-finding committee fulfills its task.”

Despite the warning messages Egypt is conveying to affirm it will not give up on protecting its share of Nile water, the Egyptian prime minister was optimistic about the possibility of negotiating again and resolving the crisis. He said during a press conference on Jan. 9, attended by Al-Monitor, “Negotiations do not end in one session. Things will continue to progress, and the issue of the dam remains until now open for discussion.”

A technical source who attended the latest negotiations commented on the prime minister’s statement, telling Al-Monitor, “Negotiations reached a deadlock. The Ethiopian water minister publicly refused during an official meeting the request of Egypt to host negotiations in Cairo, claiming that the security situation in Egypt was the reason for his refusal.”

“Egypt is now wasting its chance. Calling for more negotiations is time-consuming because Ethiopia is proceeding with the constructions as a de facto situation,” the source warned.

For his part, Ethiopian Water and Energy Minister Alemayehu Tegenu said in a statement on Jan. 13: “The construction of the Renaissance Dam is taking place without any hassles or difficulties. The project will be finalized according to the decided time frame,” reiterating that “the project is not facing technical or funding problems.”

The escalation and crisis involving trust continues to prevail among Egyptian and Ethiopian officials. Every party is trying to show a strong stance. This time, however, the balance is tipping in favor of Ethiopia since it is completing the project while Egypt is preoccupied with its internal problems, despite Egyptian officials talking about adopting all security and political measures to preserve the rights of Egypt to the Nile water.