Syrian education a casualty of war

Syria’s education sector has suffered a heavy blow from the fighting, as security concerns, internally displaced students and the emigration of professors abroad has led to a sharp drop in the level of education in the country. 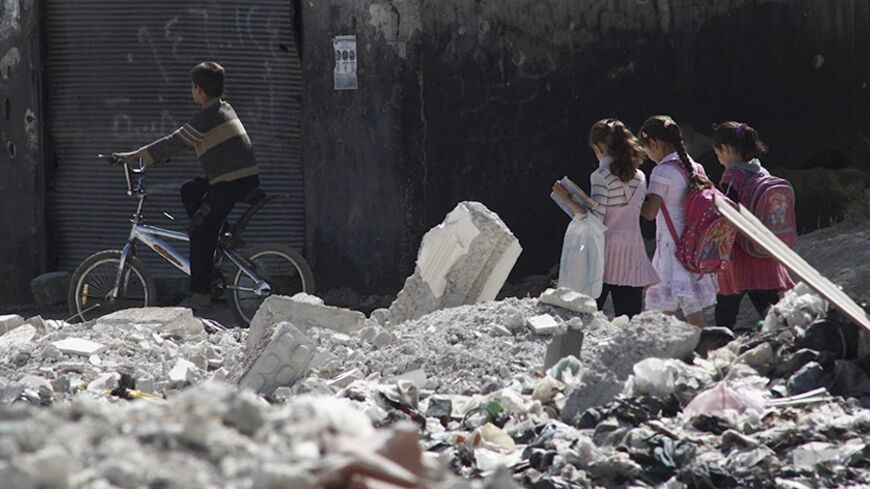 Prior to the political/military crisis that began March 15, 2011, Syria was known for its advancements in the field of education — at the primary, secondary and university levels — with primary school enrollment rates reaching 97%. According to a UNICEF study released in December 2013, education in Syria has sharply declined over the past three years. Nearly 3 million children have been forced to quit their studies, as the war has destroyed their classrooms and many families were forced to flee the country.

The study noted that one out of every five schools in Syria has become unfit for use, as they have been damaged, destroyed or are being used as shelters for the internally displaced. Moreover, in countries hosting Syrian refugees, between 500,000-600,000 Syrian refugee children are not enrolled in school. The study pointed out that the areas most affected in terms of education are those where fierce battles are taking place — including Raqqa, Idlib, Aleppo, Deir el-Zour, Hama, Daraa and rural Damascus. In some of these areas, school attendance rates have dropped to 6%.

Well-informed sources in the field of education told Al-Monitor that there had been more than 500 cases of kidnappings and killings targeting schoolteachers and university professors from the beginning of the crisis until the end of 2013. Many students have died as a result of missiles, rockets and bombs targeting schools, kindergartens and universities, according to the same sources.

There has been a decline in the level of education in Syrian universities — especially in locations of fierce battles such as Aleppo, Homs, Idlib, Deir el-Zour and Raqqa — as many university professors have left the country. In some of these universities, available lecturers are now limited to graduate students.

Former Minister of Higher Education Mohammad Yahya Mualla announced in April 2013 that the losses and damages suffered by the ministry and its colleges in various provinces totaled more than half a billion Syrian pounds (about $5 million). This did not include losses from a number of colleges that had not been recorded, as in Deir el-Zour. Mualla pointed out that Damascus University and Tishreen University had received about 40,000 students from various provinces because of the problems in their own universities caused by the crisis in the education sector.

An official from a university in Damascus who spoke to Al-Monitor on condition of anonymity said that the education sector is one of the worst affected by the current crisis. This is because every house in Syria is affected by this sector in one way or another. The official explained that the damage is both material and psychological. The material damage includes the destruction of infrastructure for universities, colleges, institutes and educational laboratories. Meanwhile, the psychological damage lies in the difficulties students face in continuing their education, and in students discontinuing school for a number of reasons. Some students have stopped going to school due to direct or indirect threats, while others quit to enroll in the military, were displaced or fled to safer areas.

The official noted a decline in the level of education because of low attendance, as well as reduced school hours and student interaction. This decrease in attendance comes as a result of the dangers involved in traveling from home to university, as well as the increased costs of transportation and school supplies. Moreover, some students do not attend due to fears of kidnappings and killings, which have occurred repeatedly, according to the official. He added that the Ministry of Higher Education has issued decisions that allow students to attend classes or sit for exams in any university they like, provided it offers their academic major. These decisions were made in light of the difficulty, and sometimes impossibility, of continuing studies in some of the colleges and universities in areas where war has destroyed the buildings. The official also noted that the Syrian authorities are allowing students to take exams multiple times, contrary to the usual laws. These exceptions aim to facilitate education, yet will affect both performance and quality.

The university official said that the facilities provided by the authorities included allowing a student to replace research, testing and practical training with an essay question that they would answer during an exam. This has had a negative impact on various disciplines, such as engineering disciplines in general and petroleum engineering in particular. One cannot properly study petroleum engineering without labs, visits to oil fields and practical training. The same is true for a number of other disciplines. The official said that maintaining attendance and continuing the educational process is a major challenge for society and the state in Syria. However, there has been surprising perseverance. Many students continue with their studies even in the difficult conditions and in the face of threats.

The same official confirmed that the Syrian government is determined to send master's and doctoral students to finish their studies in a number of friendly countries — such as China, Russia, India, Iran and others in Eastern Europe and Latin America — despite the associated costs. This comes as part of an attempt by the government to break the siege applied by European and Western countries — such as France, Germany, the United Kingdom and others — on the higher education sector in Syria. The official noted that the number of students applying for admission to universities and graduate programs reflects this determination, and is a sign of vitality and power in a society suffering under the weight of a war that has drained its material and intellectual resources.

The official acknowledged that many university professors and specialists from important disciplines are leaving the country, assuming posts at other universities or taking long-term leave as a result of security threats. Others have left academia to take up political or military work. Furthermore, there are indications that both students and teachers are involved in military activities, according to the university official.

Sources from the office of the president of Damascus University said that about 10% of the university's professors have left the country and accepted offers from other Arab universities.

Rana Mahmud, a professor at a private university in Syria, told Al-Monitor that the university she works for has moved from its headquarters in rural Damascus to a location inside the capital. This came after fighting intensified and the university’s buses were hit by gunfire and mortars. She added, "Given that the university is private, the administration spent large sums to rent space in the city center, in hotels and other buildings. While [the administration] has prepared classrooms, computers, projectors and laboratories, the new location cannot match the old headquarters in terms of space and quality."

Mahmud noted that some professors had moved abroad, which forced the university to hire those holding only master's degrees. She added that due to a lack of space, there are now more than 65 students in each class, a factor that negatively affects the learning process. However, demand for registration at the university only decreased during the first year of the crisis, and subsequently student interest grew rapidly, she noted.

According to Mahmud, the mere fact that the university has continued to operate despite indiscriminate explosions and bombings is an accomplishment. She admitted that while "performance and quality are not the same, this is 100 times better than shutting the university down." She added, "Some resources are no longer available, and our library — which was overflowing with books — remained at the old headquarters. There are also problems relating to the rise in the price of foreign books. The price of a reference book has increased to about 12,000 Syrian lira (about $80). Now, we rely on our electronic library. It contains modern resources for research and allows students to complete projects."

She said that the purchasing power of teacher salaries has declined due to the high price of the dollar, noting that the salary increase implemented by the government last year did not apply to private universities.

Susan, a student in the College of Information at Damascus University, told Al-Monitor that a significant portion of students are unable to attend university, given that they cannot travel to campus because of the presence of militants in their places of residence. She noted that universities in the capital maintained acceptable hours in comparison with universities in areas such as Homs, where there are neither classes nor exams. Susan said that there has been a decline in the level of education compared with that before the crisis, but denied that the administration at Damascus University had been lenient when it came to exam results. According to her, the administration remained strict, without taking into account the security situation or the long electricity cuts.

Suleiman, a student in the College of Engineering at Damascus University, told Al-Monitor that there has been a decline in the level of education, albeit small. According to him, it is caused by the university's inability to absorb the large number of internally displaced citizens who come from governorates such as Homs, Daraa and Aleppo. He pointed out the the most of the students' problems were related to transportation, as students were late for lectures because of bad traffic or having to stop at checkpoints. Some other students reside in areas experiencing fighting. He added, "This is gradually reflected in their educational achievement. Some students have decided to stop their studies since they are unable to make it to the university or institute where they study."