As the battles in Anbar continue and sectarian tensions rise in Iraq, citizens from both sides have set up Facebook pages to gather supporters and present their views. 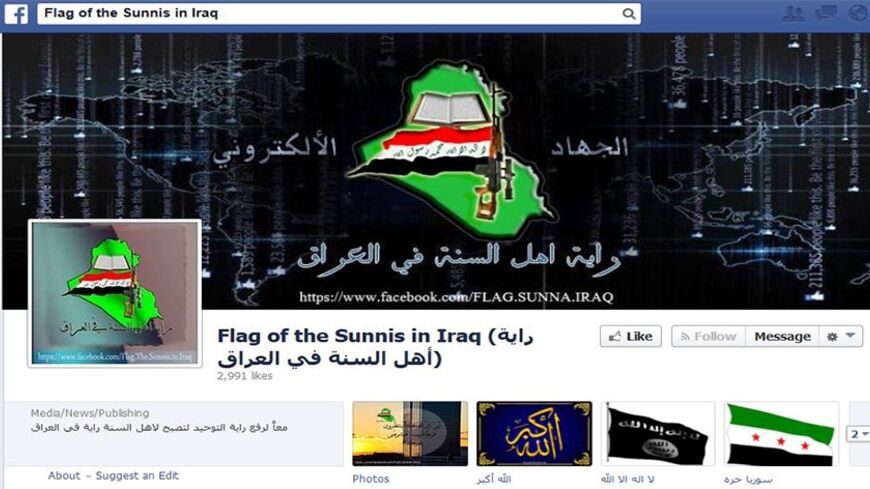 The administrator for the Facebook page for Rayat Ahl al-Sunnah Fil-Iraq says they set up a page to tell the world their side of what is happening in Anbar province. - Facebook/Flag of the Sunnis in Iraq

A new front has opened in the battle for control of Anbar province. The conflict, which began in late December 2013 when the Iraqi army deployed to the Anbar desert to combat the Islamic State of Iraq and al-Sham (ISIS), has now expanded to such popular social media platforms as Facebook and Twitter. Activists backing the Iraqi army have established pages supporting the security forces, while tribal fighters battling the army as well as ISIS have created similar pages. They all provide updates of events on the ground, and some do not shy from indulging in incitement against their adversary.

The administrator of the Facebook page for Rayat Ahl al-Sunnah Fil-Iraq (Flag of the Sunnis in Iraq), which views the army as occupying Anbari cities to harass and oppress the population there, pleaded with the media to support the “battle of the people of Anbar against the army.” In an interview with Al-Monitor, he asserted, “The media has not dealt fairly with our cause. We established a page on Facebook so that we could tell the world what is happening in Anbar.”

The group's page has attracted a large number of supporters from among Sunni youths, who share the page’s view that Anbar's “cities are being brought to ruin by the army.”

On the other side of the online battle, the Facebook page for the Iraqi Electronic Army seeks to close down pages that call for fighting the army by informing Facebook administrators of abuses aimed at Iraqi national figures on them. The page administrator, who spoke on condition of anonymity, told Al-Monitor, “Our page wages war against all the terrorist pages, from every sect and religion in Iraq.” He denied that his page had received “material support from any political faction in Iraq.” He said that it “communicates with all the soldiers of Anbar to relay word of what is happening on the ground there.”

Administrators from a number of Facebook pages founded in conjunction with the outbreak of the Anbar crisis have refused to speak to the media. These include those for the Anbar Tribes’ Revolutionary Military Council and Herak.

Writer and political analyst Marwan Yassin al-Dulaymi observed, “Anyone who interacts with these social media websites is fairly certain that they are sectarian electronic armies engaged in bitter warfare with one another.” He stressed to Al-Monitor, “This war might be the most dangerous to [Iraqi] society, in terms of the nationalistic and sectarian hatred that it mobilizes.”

Dulaymi does not rule out the possibility that “the Iraqi government, especially the National [Iraqi] Alliance, has hired dozens of recruits to wage an online battle against every voice that crosses and differs with its policies.”

Commenting on free speech, Batul Faruq, a member of the parliamentary Committee on Culture and Information, told Al-Monitor, “The Iraqi constitution, which guarantees freedom of expression, prevents the government from intervening to stop the sectarian warfare that is being carried out on social media websites.” He appeared to agree somewhat with Dulaymi's view of the social media wars, observing, “Sectarian comments on Facebook have created a state of sectarian tension within Iraqi society.”