Prime Minister Benjamin Netanyahu has decided to use the American espionage as leverage for releasing Jonathan Pollard, a deal which might facilitate the acceptance by the Israeli right of an agreement with the Palestinians. 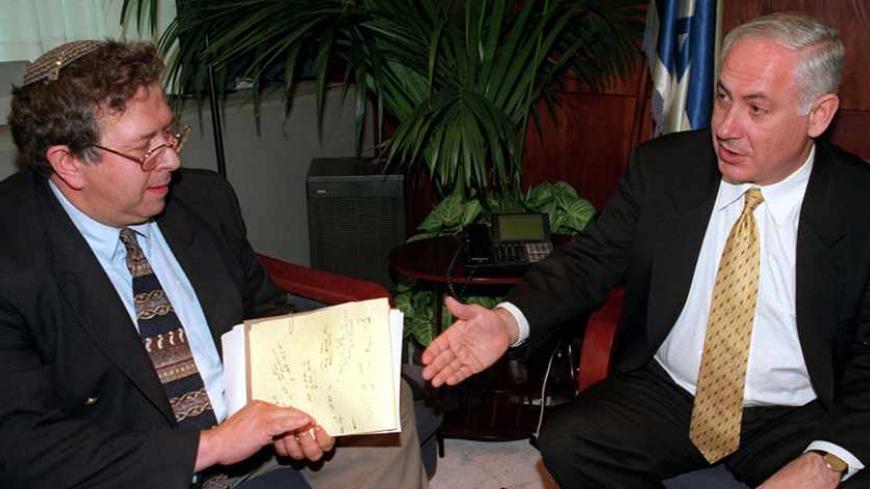 It was not a coincidence that Israeli Prime Minister Benjamin Netanyahu decided to keep his harsh response to the US spying affair for the start of the weekly Likud-Beitenu meeting on Dec. 23. Netanyahu waited three days after the revelation of the National Security Agency's monitoring of the emails of Israeli prime ministers and defense minister to denounce the United States in this forum, characterized by the right wing's hard line and general suspicion toward the Barack Obama administration, which is leading the negotiations with the Palestinians.

“There are certain things friends mustn't do to each other,” Netanyahu said in a serious tone, “things that are unacceptable to us.” Immediately afterward, he revealed that he has ordered an inquiry into the matter and connected the events of recent days with the Israeli demand to free Jonathan Pollard from a US prison. The prime minister said that he met with the Israeli spy's wife, Esther, and said, “Pollard should have been released long ago. I think this is understood by everyone here and I believe it is also understood to an increasingly larger crowd in the United States.”

Netanyahu said these things in front of the cameras. When he finished, the journalists were removed from the room, and they rushed to report the prime minister’s declaration, unprecedented in its harshness toward the Obama administration.

Only one day earlier, at the weekly cabinet meeting, Netanyahu sounded totally different. He gave only a moderate, implied response, and said, “We do not need any special event to discuss the release of Jonathan Pollard. ...This is neither conditional on, nor related to, recent events.”

The difference between these two responses goes much deeper than the degree of harshness of the prime minister’s tone, who according to reports, was under constant surveillance by a friendly nation. Netanyahu explicitly inserted the demand to free Pollard into the equation of the negotiations with the Palestinians. In the revelation of the spying affair he saw an opportunity to bring about the release of the Israeli spy who has become a symbol, especially in right-wing circles, and from now on he does not intend to let it go. Pollard, who in November began his 29th year in a prison cell in North Carolina, will from now on also be present in the negotiations room with the Palestinians.

On the eve of the signing of the Wye Agreement in October 1998, Netanyahu succeeded in securing a personal promise from then-US President Bill Clinton to free Pollard in the framework of the agreement that was supposed to chart the course for the implementation of the Oslo Accord. From Netanyahu’s standpoint, this was a gesture that could have softened the response of the right to the concessions he had to make in the framework of the draft agreement. According to people who were close to him in that period, the prime minister was deeply disappointed that Clinton denied his promise and believed that the failure of his efforts to free Pollard was among the factors that brought about his fall in the 1999 elections.

Now Netanyahu feels that he’s gotten a second chance. The situation is similar: US-moderated negotiations are taking place with the Palestinians with the goal of reaching a framework agreement, at the very least. Netanyahu is being forced to act in contradiction with the position of most of his voters and his ideological beliefs, while under massive US pressure. But this time the Americans have been starkly exposed in their double standard: Pollard has been imprisoned for almost 30 years for a far less serious offense than what’s been revealed in the documents leaked by Edward Snowden. Not only have US intelligence agents read the prime minister’s email messages, they also rented an apartment across the street from the private residence of former Defense Minister Ehud Barak, to listen to his phone line.

The prime minister has identified an opportunity that will not repeat itself, to weaken the US stance on Pollard and thus to score a real achievement among his supporters, which would ultimately help him advance an agreement with the Palestinian Authority. He’s already looking ahead to his next term. Netanyahu intends to run once again for premiership as the chairman of the Likud Party, and until then he has to tread carefully on the thin line between the existential political necessity to please right-wing voters and the national necessity of maintaining sound relations with Washington.

In parallel to ratcheting up his response to the spying affair, the prime minister allowed his ministers to freely attack the Americans and accuse them of hypocrisy. He could have ordered a media silence, as he has done at other times conflict has erupted between Jerusalem and the White House, but this time not only did he allow them to talk — he even encouraged them.

Those of keen hearing at the party meeting on Dec. 23 discerned that this was the first time in many months that Netanyahu didn’t use the word “Iran” in addressing this forum, and even allotted a significant part of the party meeting to the Palestinian issue. This nuance shouldn’t be taken lightly. It may reflect that Netanyahu, too, has finally understood that Iran, at least in the near term, is not at the top of the international agenda, while on the other hand, his moment of truth in the negotiations with the Palestinians is fast approaching.

When ministers and Knesset members such as Uzi Landau, Gideon Saar and Ofir Akunis expressed reservations regarding the proceedings of the negotiations and Israel’s positions as represented in the negotiations, Netanyahu responded with what sounded like a warning, that if the negotiations will reach a dead end, and Israel will be blamed for it — this will have serious ramifications.

Some of those present at the meeting left with the sense that the prime minister understands that he can’t bear the sole burden of the international response for the failure of negotiations from Israel’s end, and therefore the exposure of US surveillance came at a good time for him. According to a senior minister, “Netanyahu understood that he could use the US spying affair as a means to put pressure on the Americans, who yearn to show an achievement in the negotiations with the Palestinians. It’s really not complicated. It’s even necessary for him to do so. It will help him with the right. What will Uzi Landau and Danny Danon say if he returns Pollard to Israel? It softens the blow. They could maybe even swallow a framework agreement with the Palestinians.”