The emotional estrangement of Turkey’s Kurds has deepened over Ankara’s failure to bring to account those responsible for the killing of 34 Turkish Kurdish youths in 2011 and the continued imprisonment of Kurdish members of Turkey's parliament. 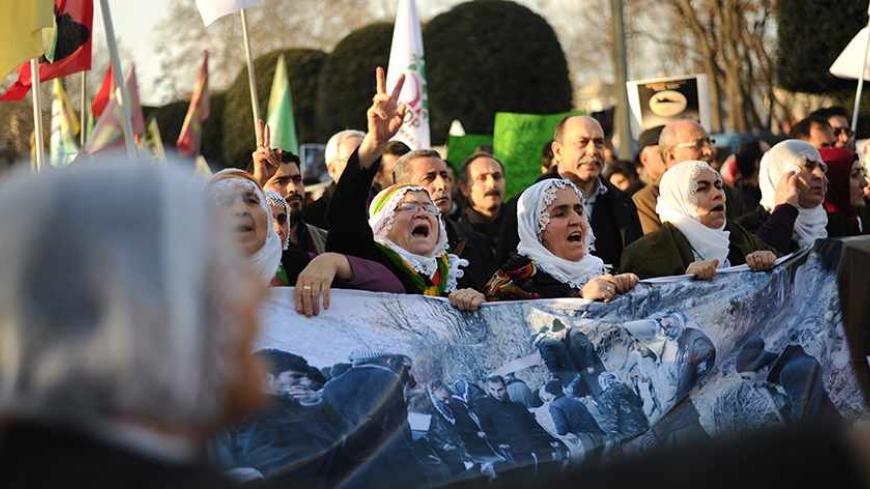 Kurdish people chant slogans during a march marking the second anniversary of the killing of 34 Turkish-Kurdish civilians working as smugglers at the Turkey-Iraq border, Istanbul, Dec. 28, 2013. - OZAN KOSE/AFP/Getty Images

“Kurds are growing increasingly estranged emotionally to the idea of Turkey’s unity.” This is an observation we have come to hear frequently from Kurdish quarters. Most recently, Aysel Tugluk, the co-chair of the Democratic Society Congress (DTK), drew attention to the Kurdish mood, in remarks at a commemoration held for the 34 youths killed in an air raid at the Iraqi border, mistaken for Kurdistan Workers Party (PKK) rebels while smuggling goods from Iraq. “The Roboski incident is a breaking point. The Kurdish people have gone through another period of questioning over the Roboski massacre and become emotionally estranged,” Tugluk said.

The state has yet to give an account of the massacre near the village of Roboski in Uludere district on Dec. 28, 2011. Adding to the tragedy, Miran Encu — the 42-year-old aunt of Vedat Encu, one of the youths the Turkish F-16s tore apart — died of a heart attack at the commemoration. The diagnosis was unanimous: “Her heart could not bear the grief.” Over the past two years, the state has failed to publicly identify a single suspect responsible for the 34 deaths, whereas it was expected to take big steps to uproot the “state-is-an-enemy-to-us” maxim, enshrined in the Kurdish mind ever since the 1937 Dersim massacre, planned for two years in the Turkish parliament.

Since Dec. 17, the government has demonstrated how boldly it could use its authority, removing hundreds of senior officials for failing to stop a corruption probe extending to cabinet members. That the same government has touched no one over Roboski not only casts doubts on its sincerity about resolving the Kurdish problem but fuels suspicion that Prime Minister Recep Tayyip Erdogan himself might have given the order to strike.

This claim — long suspected but unspoken — was uttered by Selahattin Demirtas, the co-chair of the Peace and Democracy Party (BDP), during the commemoration at the Roboski cemetery. Here is what Demirtas said:

“Let me now tell you the information we have. That night, the General Staff received a piece of intelligence about a convoy at the border. They are told that [senior PKK commander] Bahoz Erdal is in the convoy, but that civilians, too, may be in it. This secret information is withheld from officials here in Sirnak and Uludere. The prime minister is informed on the phone. They tell him it will be a risky operation … that they will be striking Bahoz Erdal, but civilians may be also involved. It is the prime minister who gives them the go-ahead, he orders them to strike. The warplanes take off on the prime minister’s order to take our 34 kids away from us. Later, they realize that all in the convoy were Roboski villagers. Ever since, they have been trying to cover up this case. In comparison, 800 people have been so far removed from office on direct orders from the prime minister after the sons of three ministers were detained [in the fraud probe]. The 34 kids of the mothers here were torn apart on these hills but not even a corporal was removed from office.”

Certainly, many aspects of the Roboski raid remain in the dark. The origin of the strike order needs investigation. So far, the state has suspended one commander and launched an investigation against 17 privates — not for the massacre but for “turning a blind eye to cross-border smuggling.” A parliamentary subcommission tasked with probing the incident reached nowhere. The General Staff told the commission, “Everything was done according to the rules,” and the commission washed its hands of it, saying the killings were not intentional.

Just on the anniversary of the massacre, the Appeals Court upheld a jail sentence of eight years and nine months for Sebahat Tuncel, the co-chair of the People's Democratic Party (HDP), for membership in the PKK. If the ruling is read out in parliament, Tuncel will lose her judicial immunity and land behind bars. She will also lose her eligibility for re-election. Here is how Tuncel reacted to the ruling: “Was this sentence handed down on me for calling the thieves to account, or for calling to account those who are dragging the country to a war, or because I’m defending the struggle of the Kurdish people? This is not a judicial but a political decision.”

The hasty ruling against Tuncel dealt another blow to hopes that the imprisoned Kurdish members of parliament (MPs) would walk free following the example of main opposition deputy Mustafa Balbay, released recently on a Constitutional Court ruling. The special authority court in Diyarbakir has refused to release the Kurdish MPs, arguing that the Constitutional Court ruling pertained only to Balbay’s individual case. Yet, in theory, judicial channels remain open for the Kurds. There is a widespread conviction, however, that double standards will be applied, as reflected in Tuncel’s comments: “Not only Kurdish parliament members are kept in prison, the ground is being laid for more [to be jailed]. It means my situation is not an exclusive one. Other cases may follow suit at the Appeals Court.”

Tuncel’s case points to the government’s biggest predicament in efforts to resolve the Kurdish problem. Article 320 of the Anti-Terror Law, which deals with “setting up an organization with an intention to commit crimes,” has been used to arrest thousands of Kurds as part of the probe into the Kurdistan Communities Union (KCK) and led to myriad rights violations. The vaguely worded article, utilized also to convict Tuncel, gives judges broad interpretative and discretionary power. The government has failed to amend the law despite widespread criticism. Hence, the peace process remains without a legal leg, advancing in a “pirate” manner.

Ali Duran Topuz, a jurist and a columnist for Radikal, analyzed the lack of a legal groundwork in the process for Al-Monitor, saying, “The fact that the Turkish state has sat down at the [negotiating] table with PKK leader Abdullah Ocalan on the wishes and orders of a powerful prime minister is no doubt of historic significance. No other leader has ever accepted or even implied he may accept the mere idea of doing that. In a way, we can say that things are going well. The table has not been knocked over so far, the dialogue has not been severed. … The continuity suggests that the two sides — Ocalan and Erdogan — are resolved [to go on]. On the other hand, however, things are not going well. This aspect embodies conditions that could make things worse in the future. The sine qua non dimension of the process, I mean the legal dimension, is being stubbornly overlooked. With the parties coming to the table, we were supposed to see efforts to draw up a [new] legal framework. … But this has not happened. We are going on with the old law, which formulates Ocalan as a terrorist chieftain, the PKK as a terrorist organization and the uttering of terms such as 'Kurdish,' 'Kurdish language' and 'Kurdistan' as political crimes. In other words, the existing law considers the expression of Kurdish rights and freedoms even by nonorganized individuals to be a 'heavy penalty organized crime.' Hence, the process remains under constant risk as the government fails to begin to draw up [new] laws and dismantle the old ones. Of course, this reluctance could be easily explained with political risks. But in the absence of efforts to draw up a new law, that is the law of the negotiating table, the just settlement of crucial problems such as Roboski becomes impossible and highly provocative rulings that could shatter the table — such as those to keep [Kurdish] deputies in jail and imprison more — cannot be stopped. One should in fact recognize that the Anti-Terror Law, the embodiment of a state of emergency law besieging the issue, is having a peace-damaging impact not only on the Kurdish question but in all political realms. The recent row between the government and the [Gulen] community, for instance, has demonstrated the dangers of the unlawful potential that this law holds. The parties are now using a 'war law' against each other. In short, if the government is determined to sustain the peace process, trying to move forward without changing the law is a grave mistake.”

Now the critical question: If there is no justice for Roboski and the Kurdish MPs, could there be a peace process with the Kurds? For Topuz and many other intellectuals, the answer is no. Roboski is a benchmark, a litmus test, the last and fatal notch in the emotional estrangement of the Kurds. While the top echelons of the state termed the massacre an “operational mistake,” an “unintentional” incident and even reduced it to a metaphor for abortion, the Kurds — denied even an apology — see Roboski as the site of another insult.