Intelligence reports of al-Qaeda threats against Turkey are causing concern. 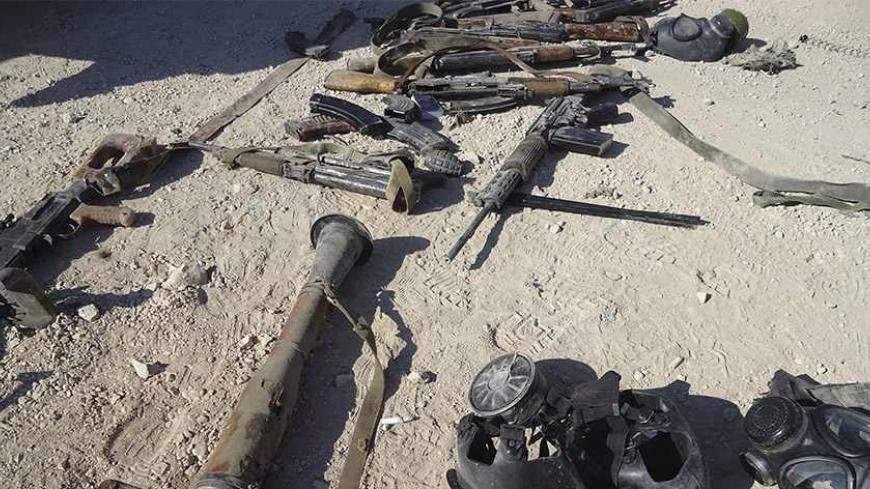 Weapons are seen in Adra, Aug. 7, 2013. The Syrian state news agency SANA said the weapons were confiscated from rebels from the al-Qaeda-linked Jabhat al-Nusra. - REUTERS/SANA

Will Turkey’s cutting off logistical support to al-Qaeda in Syria, and discriminating between al-Qaeda-affiliated organizations and moderate groups under the Free Syrian Army banner, be enough to extricate the country from the Syrian morass? Reports leaked from the Turkish National Intelligence Service and other security agencies are instilling fears of a boomerang effect in Turkey, which is trying to give the impression that it has intensified border security. Illegal activities by armed groups who, until September, appeared to be enjoying impunity, are now finding their way to police and judicial records, indicating there may be some changes.

Some revelations and confessions are causing confusion regarding what Turkey is trying to achieve. For example, on Nov. 8 Turkish Prime Minister Recep Tayyip Erdogan described the seizure of a truckload of ammunition as "showing Turkey’s sensitivity," and therefore an indication of Turkey’s anti-al-Qaeda operations. But the police were hoping to find narcotics in the truck, not guns, since they had received a tip on narcotics smuggling. If the tip had been related to weapons, perhaps the truck would not have been stopped. We gather this much from the court statement of L.K. the truck driver.

According to court documents presented to parliament on Nov. 26 by Kemal Kilicdaroglu, leader of the main opposition Republican People's Party, the truck driver L.K. told the court: “Twice before, I delivered cargo to Reyhanli. The place of delivery was an enclosure guarded by the gendarmerie outpost. I had to go through the gendarmerie check before driving in, but they didn’t check the truck. They only spoke to people in the car that were escorting my truck. Then I unloaded my cargo at an enclosure 200 meters from the outpost.” Based on security reports, the court declared that the destination of the mortar ammunition was an al-Qaeda camp and arrested the suspects on charges of “supplying weapons to a terror organization.”

Syrian national Haisam Topalca was earlier implicated in the car-bomb attack in Reyhanli. When he wasn’t called in, even as a witness, claims surfaced that he was working for intelligence services. The latest information on the mysterious Topalca suggests that he was kidnapped in the Latakia region of Syria or had gone underground. According to court records, Topalca had procured 20,000 ammunition rounds from Konya in October.

The official admission regarding the weapons in the truck raises doubts on Turkey's declarations of ceasing support to armed groups. But then came a series of developments indicating that al-Qaeda may be turning its guns on Turkey:

What about native al-Qaeda?

There is also news of increasing vigilance in Turkey. According to a Turkish Interior Ministry report leaked to the media, Turkey, acting on information from foreign intelligence services, has added another 3,000 foreign nationals to its list of people banned from entering Turkey. According to the lists, which were sent to all points of entry, the foreign nationals originate from 30 countries, including Germany, France, Britain, Sweden, Norway, Saudi Arabia, Jordan and Pakistan. It is estimated that 300 British nationals and 200 French nationals have joined jihadists in Syria. These countries, which fear fighters returning to carry out operations in their own countries, hope Turkey can take appropriate measures.

Another reality as equally worrisome as al-Qaeda fighters in Syria turning their guns on Turkey, is militants from Turkey who have joined al-Qaeda in Syria and gained combat experience. According to the Turkish Ministry of Interior report, about 500 people have gone from Turkey to Syria to fight in the ranks of Jabhat al-Nusra and ISIS. Some were trained in al-Qaeda camps in Afghanistan and Pakistan. According to official figures, 13 Turks have died in Syria clashes, but the total is believed to be 75.

Turkish officials, who resent being questioned, hope that if these jihadists return home, and moderate groups in Syria eliminate the al-Qaeda trouble as was done in Iraq by the Awakening groups, then Turkey won’t be threatened. But, as learned in Pakistan, which was recruiting militants for the Afghanistan front, there is a price to pay for being a launching pad for war with another country. Turkey's new approach of mobilizing moderate groups of the Free Syrian Army and even some Salafist groups against al-Qaeda not only magnifies the threat against Turkey's borders but also endangers local elements in Syria, such as the Turkmen.