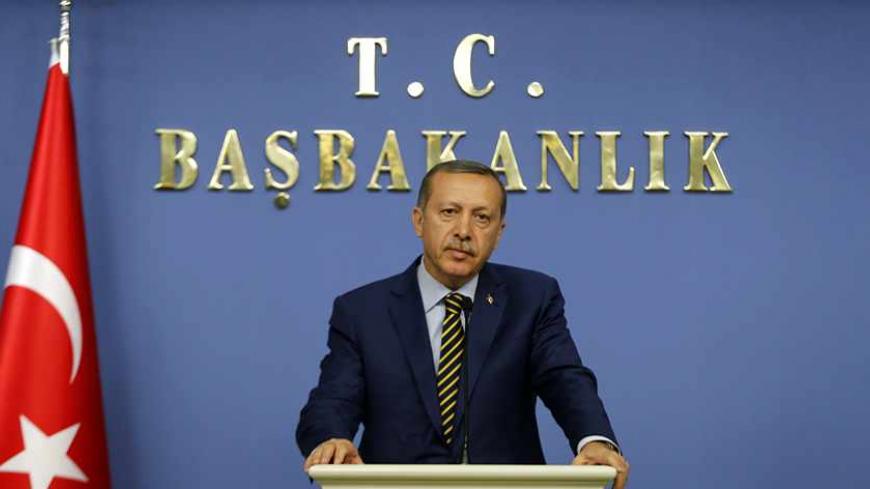 It might have been an ordinary, pleasant Christmas for most of the world, but Dec. 25, 2013, will go down in history as a sheer nightmare for Turkey’s once seemingly invincible, unchallenged and popular prime minister, Recep Tayyip Erdogan. The day saw three key cabinet ministers step down, as Erdogan's once solid political power shattered, and his government sank deeper beneath a massive graft probe the includes accusations of bribery involving four ministers and amounts roughly totaling $130 million. Later that day, Ergogan felt compelled to reshuffle the cabinet, replacing 10 ministers, which nonetheless still left him treading uncertain political waters. His days of glory and arrogance, and as the focus of admiration, have turned into a fraught, open-ended quest for political survival.

In addition to their prime minister woes, Turkey’s anxious citizens have also had to face the bitter fact that after some two years of arduous but fruitless work, the multiparty, parliamentary Constitution Commission was disbanded due to the constant absence of the ruling Justice and Development Party (AKP). The exercise thus ends with no progress to report on a new, civilian social contract. The latter was expected, but what has shaken Turkey are the resignations of three key AKP ministers, all implicated in the corruption scandal.

Economy Minister Zafer Caglayan and Interior Minister Muammer Guler announced their resignations on Christmas, but denied any involvement in corruption or bribery. They said their resignations were aimed at helping the “truth come out.” The real shocker came with the third resignation, by Environment and Urban Planning Minister Erdogan Bayraktar, who made the surprise announcement through the NTV news channel instead of using the semi-official state news agency, which would have been standard procedure for his harshly worded resignation.

Bayraktar said that he had been pressured to submit his resignation "to save the prestige of the government," adding that the prime minister should also quit because most of the amendments to construction plans mentioned in the corruption investigation were made on Erdogan's orders. Bayraktar — who was in charge of the massive Public Housing Project Administration (TOKI) and is seen as the "black box" for dealings in that context — revealed that Erdogan had pressurized ministers to issue a "declaration to comfort the prime minister," adding that Erdogan had given the final "go ahead" to all the key decisions associated with the accusations. In addition, he said he was forced to sign a “declaration of resignation” aimed at "relieving the prime minister and his government." Bayraktar resisted, stating, "However, I [did] not accept the pressure put on me to resign due to the corruption and bribery operation and issue a declaration that will relieve the prime minister.”

In a country where the prime minister had attained the status of a cult figure, protected by his diehard supporters, such a declaration came as a huge shock. NTV and other conglomerate news channels for hours censored the statement for fear of suffering the wrath of a squeezed Erdogan. The prime minister, as expected, came out in his well-known defiant mood, ready for a fight. At a party meeting on Dec. 25, Erdogan called the corruption operation nothing but an "international plot," supported by some "collaborators within the country that aims to sow discord in Turkey." He accused the domestic media of treason, claiming that there are various gangs and organizations spying on and betraying the homeland. Erdogan singled out business groups, including the Turkish Industrialists and Businessmen's Association, for allegedly cooperating with the international conspirators. He vowed to fight all such groups to foil what he called “dirty plans” to topple his government. The "operation" has cost Turkey some $20 billion, he claimed.

The aftershocks continued later into the day. Idris Naim Sahin, a former interior minister and an AKP co-founder, resigned as an AKP deputy hours after the resignations of the three ministers from their posts. More resignations are expected, as voices of dismay grow louder among the remaining deputies.

It is clear the AKP has come to a crossroads. The essence of the movement — which had been defined by the acronym "AK" ("pure" or "clean") — once meant a deviation from the corrupt old political classes of Turkey. If the  current allegations prove to have some basis in fact, Erdogan will have a tough time explaining where he stands on such a central issue. Reports say he was given a detailed briefing by independent judicial officials on Dec. 17, the day of the police raids stemming from the corruption probe. Sources told Al-Monitor that Erdogan was informed that the evidence assembled was strong, without a doubt. He reportedly initially went "ballistic" on those implicated, but after consulting with his advisers, he quickly resorted to his default position of blaming it all on a conspiracy to oust him from power.

So far, Erdogan’s pattern remains unchanged. He has launched a multipronged counterattack to what he sees as the core of the conspiracy. He ordered the removal of more than 150 police chiefs, including in Istanbul, and around 400 law enforcement officers linked to the operation. Erdogan also dismissed the deputy of the independent financial police department (MASAK) and had judicial directives changed to oblige police officers to inform their superiors of all investigations, regardless of whether they involve the government and its bureaucracy.

The European Commission, with which Turkey is negotiating for European Union membership, was quick to issue two warnings. Stefan Fule, spokesperson for the EU commissioner for enlargement, relayed, "The latest developments, including the sacking of police chiefs and the instructions to police to inform authorities on investigations, raise serious concerns as regards the independence, efficiency and impartiality of the investigations and the separation of powers. This further highlights the need for establishing a proper judicial police, as already recommended by the EU." There is widespread concern that after such an unprecedented, harsh reshuffling of the security apparatus, Turkey may be more vulnerable than ever to acts of terror and provocations.

Erdogan is facing the greatest quagmire in his political career after being caught off guard and his position shattered. His government is even more shaky with a cabinet reshuffle; there is uncertainty about additional probes; and he is confronted with an alienated police force and judiciary and a Turkish public shocked by the recent revelations. The more defiant and aggressive Erdogan becomes, the more votes he could lose. His survival instincts are on high alert, and he will do his utmost to contain the damage the probe might cause, attempt to control more of the judiciary and, if necessary, declare early elections.