Though the battles taking place in both places take different forms, the events going on in Ghouta and Geneva will bear significantly on the near future of the conflict. 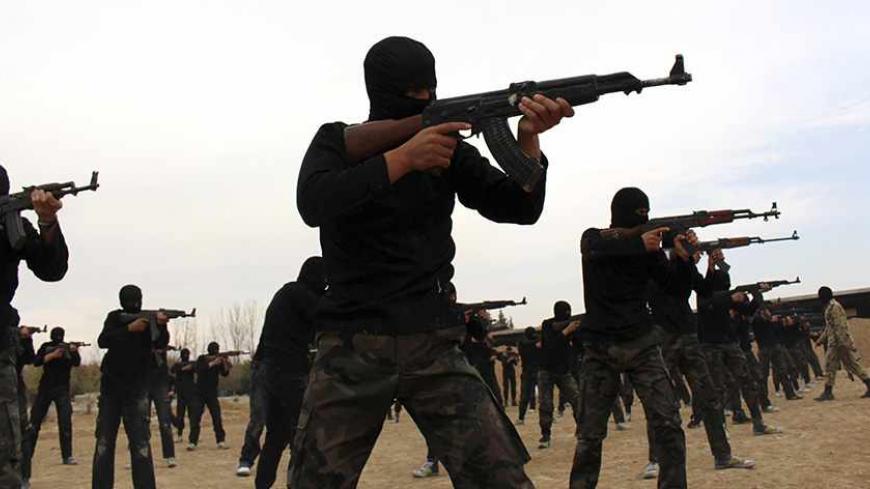 Islamist fighters demonstrate with their weapons during their graduation ceremony at a camp in Ghouta, near Damascus, Nov. 28, 2013. - REUTERS/Diaa Al-Din

It's now clearer than ever just how harsh and tense the race in Syria is between the battle and politics, between the field and the table, or more specifically between “Ghouta II” and Geneva II. The race has a preliminary date set: Jan. 22, 2014.

Speaking to Al-Monitor, a Syrian official said that this race between settlement efforts and attempts to change the military balance of power on the ground is fatal and tragic. A Syrian senior security official told the same source that more than 1,000 opposition gunmen were killed in ​​East Ghouta in the past few days.  According to the Syrian official, East Ghouta is witnessing the last attempts on the part of opposition militants to achieve real and qualitative progress on the ground, which would allow them to impose a minimal level of conditions during the next round of negotiations. Why is the battle raging in this particular place? Because it's the last outlet that armed opponents have while heading toward the gates of the capital, knowing the significance of accessing any gate in Damascus at both the military and political levels, especially following a series of successive defeats on other fronts, from Aleppo to Homs to Qalamun, which is adjacent to the border with Lebanon. From East Ghouta, any armed military progress can lead to controlling the Damascus International Airport and coming extremely close to the administrative border of the capital.

Since the battle has taken on this central and quasi-fateful character, the same Syrian official claimed that Saudi elements involved in the war alongside the armed opponents in East Ghouta itself. He added that the Syrian army has provided relief in the battle as a result of security coordination with Jordanian official quarters, which provide the army with very important data that militants have moved into Syria, and more specifically to Ghouta.

On the diplomatic front, the official said that the Syrian authorities are ready for Geneva II on Jan. 22 and that preparations have been completed both in form and content.

As far as form is concerned, the official Syrian delegation is likely to be headed by Foreign Minister Walid Moallem, should the international community send ministerial representatives. Otherwise, one of Moallem’s aides would head the delegation. It should be noted that Moallem has had close ties with a large number of US officials since the days of his diplomatic career in New York and Washington in the 1990s. That era was deemed as the “American-Syrian honeymoon,” and saw Damascus’ participation in the Western alliance led by Washington to expel Saddam Hussein from Kuwait in 1991.

As far as content is concerned, Damascus’ vision of Geneva II is quite clear: no preconditions and no political coups that would achieve on the table what insurgents failed to achieve on the battlefield. The fate of the Syrian regime, authority and people is to be decided by the Syrians based on democratic mechanisms, the fairness and transparency of which the world can be assured.

On the opposition’s side, however, things look more nebulous. There, the current balance would have one believe that those who have the upper hand on the ground do not go to the negotiating table, especially when it comes to jihadist militants and extremist groups. Meanwhile, those who are negotiating and competing for participation in Geneva II do not have any real influence on the battlefield.

Given that things are not looking up for the opposition, foreign parties are trying to fill the void left in terms of opposition preparations. This explains the role of the French Foreign Ministry, which is carrying out a series of contacts with all of the involved parties to try and develop a vision for a future settlement in Syria. The Quai d’Orsay is trying to suggest that it has a US and Western mandate to search for a new formula for the Syrian state and regime. A reliable Lebanese parliamentary source told Al-Monitor that Paris has recently witnessed a series of international meetings in this regard and that the involved officials in the French Foreign Ministry made extensive contacts with many of the Middle Eastern countries and even Iranian officials to discuss the matter.

The same parliamentary source revealed to Al-Monitor that France is trying to base its search on two models of countries that are adjacent to Syria: Iraq and Lebanon. French officials are raising one particular question whenever they meet someone: What would be better for Syria, a complete federal geography, like Baghdad, or a consensual regime that secures sectarian partnership in power, through a central government, similar to Beirut’s complicated structure? The same Lebanese parliamentary source said that most of the reactions received by the French officials pointed out that neither one of the two models is to be followed, as evidenced by the whirlpool of violence in Iraq and the paralyzed system in Lebanon.

However, French efforts are continuing. These are trying to put forth an initial survey of the possible options that could accompany the Geneva II process, should the summit take place and should the race between weapons and diplomacy not end up changing the Jan. 22 date or agenda.

Ghouta and Geneva are two cities on two different continents, but the political relationship between the two places has become organic, causal and direct.