Some Reformist Kurds in Iran had hoped to have a Kurdish representative as governor for their region. 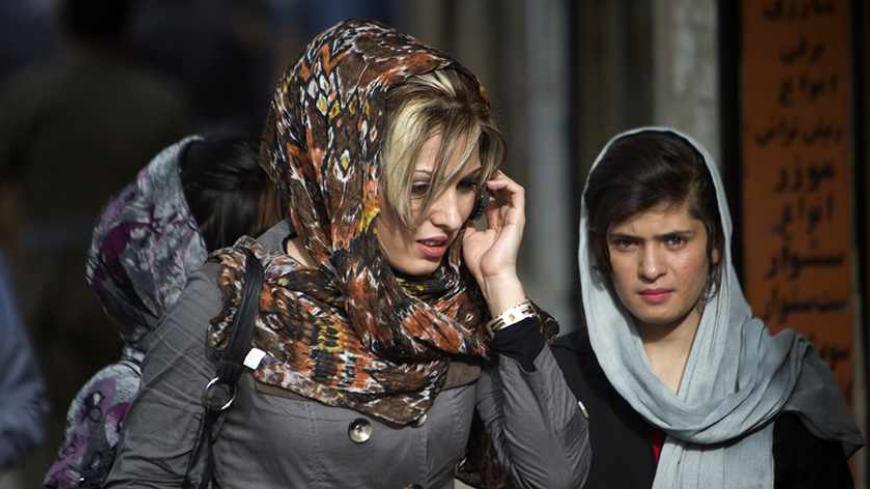 An Iranian Kurdish woman talks on her mobile phone as she walks at a bazaar while shopping in Marivan, Kurdistan province, Iran, May 12, 2011. - REUTERS/Morteza Nikoubazl

In all recent presidential elections in Iran, Reformist candidates have managed to win the majority of votes in Kurdish regions. In June, Hassan Rouhani received 71% of the votes in Kurdistan. In his campaign, Rouhani had promised to appoint locals to local administrative positions in different regions of the country. He had also said that he will "work on removing the stain of discrimination and inequality from the face of the religious and ethnic minorities in Iran."

After the new administration took office, many were hoping to see Rouhani nominate a Sunni Kurd as one of his cabinet members. There were discussions regarding the possibility of Bijan Zolfaghar Nasab, a famous soccer coach, becoming the new minister of youth affairs and sports; however, this did not happen.

The Reformist political activists were also hoping to see a Sunni Kurd, for the first time since the transitional government of Mehdi Bazargan, appointed as the new governor of Kurdistan. After a three-month delay, Rouhani's administration chose Abdolmohammad  Zahedi as the 17th governor of Kurdistan. At the inaugural ceremony of this nonlocal official, the interior minister said, "After much research and probing, the Interior Ministry could not find a local official with enough expertise and experience for the governorship of Kurdistan."

This statement provoked the Sunnis in Kurdistan. According to the Kermanshah Post, the Friday prayer imam of Paveh responded by saying, "Comments such as these are neither accurate nor beneficial. In Kermanshah and Kurdistan we have many officials who can manage not only Kurdistan but Shiraz and Esfahan, too."

The Kurdish activists also wrote about this issue in their Web logs. Farhad Aminpoor: "Mr. Minister, let us assume that your suggestion regarding the absence of any capable official in Kurdistan is accurate. Still, you should have been honest enough to give some background information regarding this issue. You should have mentioned that it is because of the broad and historical discriminations against the Kurds, and constant disregard for Kurds and Sunnis for administrative positions in the country, that this problem has now emerged."

Jalal Jalalzadeh, a former Reformist member of parliament, discussed the appointment of the new governor of Kurdistan with Al-Monitor and about how he felt this was a missed opportunity for the Rouhani administration. "Unfortunately, the government does not trust the Sunnis and never appoints Kurdish officials to important positions," Jalazadeh said. He believes that it would even serve the administration’s interests to appoint Sunni and Kurdish politicians in their efforts to reduce tensions with Sunni neighbors, a task that Foreign Minister Mohammad Javad Zarif had recently undertaken in trips to several Persian Gulf Arab countries. "Now that the new administration is trying to reduce the tension between Iran and the Sunni countries in the region, appointing Sunni ambassadors could have been a good step in achieving this goal," Jalazadeh said.

He viewed the dangerous trend of Salafism in relation to the issue of poverty and unemployment in Iran’s Kurdistan region. He believes that the administration, while respecting the Constitution as a sign of national unity, could solve some of these problems if it were willing to let Kurdish officials participate in the administrative system and take part in the decision-making processes in the country.

In recent years, Kurds have been able to improve their positions in countries such as Iraq, Turkey and Syria. As the president of Iraq, after the fall of Saddam, Jalal Talabani — a Kurd — managed to work toward national unity and lessening the tension between the Shiites and the Sunnis. In Syria, under the umbrella of the Democratic Union Party, three Kurdish provinces are being governed autonomously by Kurdish officials. In Turkey, too, Kurdish factions were able to make some gains for the Kurdish citizens.

Iranian Kurds, however — although represented in the parliament — are mostly isolated from the political scene of the country. There are a few armed opposition groups active in the Kurdish areas of Iran. The youngest of these factions is the Party of Free Life of Kurdistan (PJAK), which has attracted a large number of the youths in recent years.

Khaled Tavakoli, a Reformist activist resident of Kurdistan, talked to Al-Monitor about the rise of Salafist and armed groups. "Because of the religious split between the Sunnis and the government, Salafi groups were able to become more active, use the network of mosques and attract the youths to their organization." The Salafi groups have been successful in convincing the citizens that their activities are beneficial for the Sunni community. He added that the government is not sensitive about them and does not prevent them from being active. Kurdish political movements are often secular and egalitarian, and as such, the emergence of fundamentalism and Salafi groups is largely a new phenomenon.

Tavakoli does not see the conditions of Iranian Kurds improving. "Given that a Sunni official was not selected as the governor, the MPs will try to increase the development budget of the province,” he said. “However, since the administration is trying to cut expenses and the next year's budget will be deflationary, it is unlikely to happen."

Hemen Seyedi, a Kurdish political analyst, said in an interview with Al-Monitor, "Considering these latest developments, the possibility of a politically open environment is very low. Even if a few Kurds are able to penetrate the circle of power, Kurdistan's political problems will not be solved. The important thing is to listen to the demands of the Kurdish citizens, and appointing a Kurdish official is not the same as listening to these demands.”

He blamed part of the problem to the fact of unity between Iranian Kurdish groups. “The different factions in Iranian Kurdistan need to first come to an agreement on how they are going to negotiate with the Islamic Republic. They need to decide on what is the minimum they are asking for and who is going to be the negotiator. Currently, they are far from such an agreement."

A week before the Kurdistan governor was announced, Rouhani’s special adviser Ali Younessi said that just because they have not appointed a religious or ethnic minority to a ministerial position or as governor “did not mean they will not do so in the future.” He said, “Up until now, we have not been successful.” Younessi’s comments suggest that Rouhani’s administration did attempt to elect minorities to key positions but had their attempts blocked by people whom he criticized that those in power believe sensitive positions only belonged to them. Whether or not they are successful in the future, there is a great deal of work that needs to be done in addressing the needs of Iranian Kurds.