Iranian Kurds have been moved by images of Iraqi Kurds fleeing the Islamic State and have attempted to contribute and help. 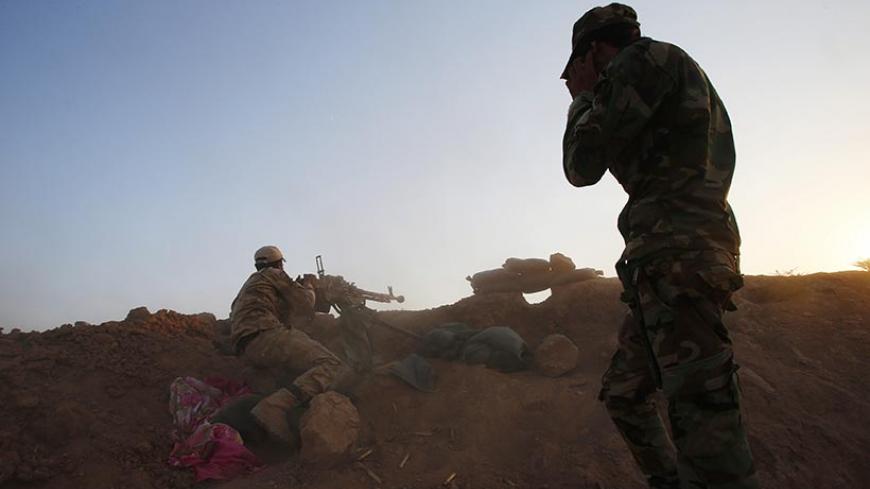 A member of the Kurdish peshmerga force fires a dushka at Sulaiman Pek front line in Tikrit, Aug. 31, 2014. - REUTERS/Youssef Boudlal

The Islamic State (IS) campaigns in the Kurdish areas of Iraq and Syria have also agitated the Kurds of Iran. Many of those living close to the borders are worried about their family members on the other side, and a general sense of solidarity has formed among the Kurds.

In Iraq, members of the Kurdish parties opposing the Iranian government have expressed readiness to fight alongside the peshmerga forces against IS. More than 150 peshmerga fighters of the Komala Party of Iranian Kurdistan and Democratic Party of Iranian Kurdistan have been stationed in Kirkuk to face IS. Fighters from the Democratic Party have also been spotted in Makhmur.

Forces of the Kurdistan Workers Party (PKK) and the Democratic Union, who are mostly in control of the Kurdish areas of Syria, have also engaged IS in the Shangal Mountains and the city of Kobani. Forces based in the Kandil Mountains, a center of the Party of Free Life of Kurdistan (PJAK), have also moved to the front line to protect Kurdish citizens against IS attacks.

The Iranian government is opposed to the idea of Kurdish opposition parties joining the Kurdistan government. Engagement between these forces and IS will strengthen the opposition's position and increase their attraction for the Kurdish youth of Iran.

Iranian Kurdish citizens are joining these parties. A source close to the PKK told Al-Monitor, “This year, we have had a fourfold increase in the number of requests to join PJAK.”

As the IS forces close on the Kurdish areas populated by the Yarsan, the local populace has taken up arms in their own defense. An activist living in Kermanshah told Al-Monitor that the Yarsan living in Kermanshah province have independently moved to Iraq to defend the cities and villages inhabited by Yarsans. Physicians from Kermanshah have also moved to Shangal to treat the wounded.

As reported by Amnesty International, hundreds of Yazidis living in Sanjar have become refugees after the IS takeover, and there is no news of the fate of many of them. Tens of thousands more are spread around the Shangal region without access to food or water.

News and pictures of the Kurdish refugees shared over social media have saddened many Iranian Kurds. A resident of the Kurdish city of Sanandaj told Al-Monitor that the pictures are reminiscent of the chemical attack on Halabja and the mass murder of the Kurds in the Anfal operation.

Civil activists, journalists and artists from Kurdish cities have launched campaigns to raise money to help the refugees. Civil activism in Kurdistan is quite difficult and the central government does not permit large gatherings. In the past, Kurdish journalists have been sentenced to jail for civil activities. Mohammad Sadeeq Kabudvand, an activist for Kurdish rights, is currently serving an 11-year prison sentence. This year, two brothers, activists Masoud and Khosro Kurdpour, were sentenced to a total of six years in prison.

Recently, some of the journalists, artists and activists living in Sanandaj tried to collect funds through the “Kurdish Philanthropic Center,” but officials did not grant the nongovernmental organization the necessary permit. Instead, they allowed the Red Crescent to collect the donations.

Fardin Kamangar, a journalist living in Sanandaj, told Al-Monitor that local officials, including the governor of Sanandaj, welcomed the move, but the permit was revoked after only four days.

Mokhtar Zare’i, an activist on the campaign, said, “Members of the city council indeed gave a lot of support. People also participated massively and we have a large amount of donated goods. The provincial broadcasting system also provided extensive coverage.”

Kamangar said, “We are planning a cultural event to encourage participation, including a book exhibit and a concert,” adding, “We Kurdish people have always been peace-loving and have never violated other territories, and we oppose violence and oppression. The emergence of IS is a disaster for the Kurdish people. We oppose violence and terrorism.”

Unfortunately, Islamic fundamentalism has been on the rise in the Kurdish areas in the past few years, and extremists have assassinated Sanandaj's Friday Prayer Imam Burhan Ali and Hojjat ol-Eslam Shaukh ol-Eslam. The presence of IS supporters in some cities has also caused general concern.

Ammar Gali, a journalist from Sanandaj who now lives in exile in Germany, told Al-Monitor that the youth living in the slums and poorer areas tend to gravitate toward IS and other extremist groups.

Jalal Jalalizadeh, a former Iranian paliamentarian, told Al-Monitor, “Recent developments have been worrying for the Kurds. These events have initiated a sense of unity and community among the Kurds. All Iranian Kurds, whether religious, secular or nationalist, are in unity about the need to protect the Kurdish citizens.”