The dark side of Pink Floyd's Roger Waters

Comparing Israel to Nazi Germany is abhorrent, even for an aging rock star. 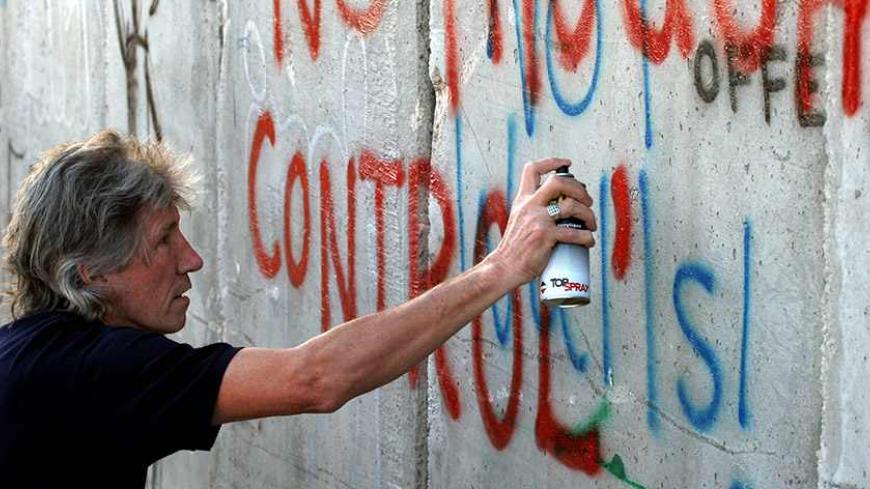 As I write this letter, I pray that it reaches you. Ever since my teens, way back in the early '70s, I’ve dreamed of writing you a personal letter to thank you for the great moments that the music you wrote and performed with Pink Floyd contributed to my life. I never thought a day would come when I’d be writing you another kind of letter, I never thought that my cultural hero would disappoint me, and maybe also those of my generation in Israel, so terribly.

After reading what you said in an interview with the online CounterPunch magazine on Dec. 6, in which you compared Israel to the Nazis in Germany, I decided first of all to go back to your music for a minute. I put on “Shine on You Crazy Diamond,” full blast, hoping the muted sounds of the guitar that grow and erupt in ear-shattering pain would overcome the distorted sounds you were making today. I closed my eyes to the sounds of the lament written in tribute to your band member who suffered a mental breakdown. And I remembered the days when the vinyl album would creak to its end on the record player, and I would be teary-eyed in excitement.

What genius, the way you and your friends in the band managed to touch the very soul of an entire generation and to tell a story — about youth, education, walls, madness, bounds, money and dreams. About life. There was no Internet then and there were no social networks, but I remember us, young dreamers in a distant land in the Middle East, imagining the world as one small village, listening avidly to your divine playing. You were our idol.

Seven years ago you performed in Israel, in a chickpea field that had been plowed in your honor near the [Israeli-Palestinian] village of Neve Shalom. Half the country was closed off because Roger Waters was coming to honor us and appear in a place that serves as an inspiration for coexistence. When you played “The Great Gig in the Sky,” the skies opened up.

Did any of the thousands who crowded into the chickpea field look to you like the Hitler Jugend? Do you truly believe that one can compare Israel in the year 2013 to Nazi Germany, which systematically annihilated millions of human beings considered racially impure? When was the last time you met young Israelis, or even older ones, and heard them saying anything about Israel? I mean, anything other than what the people of the BDS (Boycott, Divestment and Sanctions) movement, of which you are such a leading and ardent supporter, whisper in your ear as they seek to brutally boycott Israel?

I’ve heard about them and their methods from many who personally experienced their threats. They, and members of similar organizations, track every artist who comes to Israel and every theater or concert hall around the world which plans to provide a platform for Israeli artists, and inundate them with emails. They ask, or to be more precise, they demand that the artists and venues boycott Israel, and warn that performing in Israel will lead to ostracism. The emails are accompanied by photos which supposedly reveal “the real face of Israel.” I assume you, too, have been exposed to them.

You did a wonderful thing for young and adult Palestinians. You adopted the old movie house in Jenin. You helped a group of motivated young people refurbish it, so they could screen movies in a place that has been left devoid of any remnant of culture since the second intifada. Do you know that during that same intifada, dozens of terrorists traveled from Jenin to blow themselves up in the center of Israeli towns and to kill indiscriminately to such an extent that the town became known as a breeding ground for suicide bombers? Do you know that the wall (yes, the wall) built around the West Bank was designed to stop the waves of suicide bombers being dispatched by various Palestinian organizations to destroy what was once a peace agreement? You certainly know that they succeeded, big time. One can argue about the course along which the separation fence was built, but it was, and still is, designed to serve as a barrier to terrorists.

You can obviously imagine that we, too, have photographs. Of terror attacks. Horror pictures of civilian victims of the terrible conflict between Israelis and Palestinians. We, too, have many findings that detail the cause of anxiety, fear, pain. Had you taken the time to try and understand the conflict, far less time, by the way, than you put into a single track of your albums — you might have understood that the dark side is not the sole purview of either side. You spoke of the Israeli religious extreme right-wing establishment, which I do not deny exists, and you extrapolated from its actions and ideology onto all Israelis, or most of them. It’s more or less the same as saying that all residents of Jenin, Ramallah and Hebron are members of Islamic Jihad or cells of Salafi zealot organizations preaching jihad only.

You said Israelis don’t regard Palestinians as human beings. I can give you numerous examples of how an Israeli, a Jew, is portrayed on Hamas television broadcasts. That doesn’t make us any better than them, or them any worse than us, it simply means that one must make a great effort to bring the sides closer, especially among the young generation. You could have done a lot to bring together young Israelis and Palestinians, not just so they could listen to each other, but so that they could get to know each other up close; to break down the walls of hostility and demonization that each side has built against the other; to treat “the other” as a human being. Your immortal music could have served as a wonderful tool for this sublime cause. But you chose a different way and proved to everyone how superficial you are in anything that doesn’t have to do with music.

In that same miserable interview you recounted proudly how you suggested to Cindy Lauper that she cancel her planned appearance in Israel. Lauper’s standing in the pop music world is far from yours or that of Pink Floyd, but she will perform in Tel Aviv and will be fabulous. You know why? Because she knows that an artist of her stature has tremendous power to change, to influence, to shout out loud and open the skies. You touched them there, near Neve Shalom, but instead of going on to enlist Israelis and Palestinians for the sake of peace with your music, you said things that have alienated and will alienate many — and not just Israelis or Jews, also people whom you caused to feel ashamed.

I’m going to put your discs aside now. I won’t burn them, heaven forbid, I won’t boycott, but I will remove them from the playlist of the great artists of my life. I hope that one day I will put them back in, because “The Dark Side of the Moon” and other treasures you and your friends created deserve a place of honor in the pantheon, without creaks and stupidity.