Speaking at the Likud Party convention, Prime Minister Benjamin Netanyahu reverted to his old rhetoric on the Palestinian issue, giving no reason to believe that he is heading toward a historic decision. 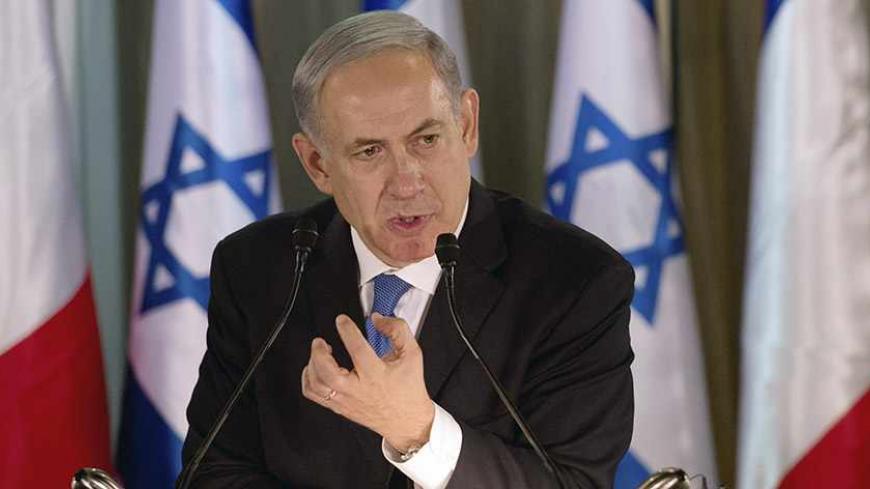 As if no agreement had been signed between the world powers and Iran, and with the same old threatening rhetoric, Prime Minister Benjamin Netanyahu dedicated a large part of his speech on Dec.18 at the Likud Party convention to the Iranian nuclear program. His bottom line hasn’t changed either: Israel will not accept a nuclear bomb.

This was an anachronistic speech, lacking in vision, and most of all, detached from the international reality created after the signing of the Iranian Geneva deal on Nov. 24. The significance of the interim agreement is that in the next few months, at least until negotiations over a final agreement, the world powers are giving diplomacy a chance, calming the tone and halting the threats. Only in Netanyahu’s world has time been frozen. Not only on the Iranian front, but also on the Palestinian question. Netanyahu spoke as if US-sponsored negotiations haven’t been taking place in the last few months and declared, with a nod to the extreme right, “We won’t stop building the land for a minute.”

It seems that Netanyahu took several steps backward from the positions he expressed in his June 2009 Bar Ilan speech, at the beginning of his last term as prime minister, and returned to the familiar verbal sparring with the Palestinians. “I know they tell us that the reason there’s no peace is because of the settlements … That’s not correct,” said the prime minister to the convention delegates. “The reason is the continued opposition to the existence of a Jewish nation-state within any borders, and we have the right to a state like any other people. They don’t recognize a Jewish state … I can’t promise that an agreement will be reached, it doesn’t only depend on us.”

Seemingly, Netanyahu faced mitigating circumstances. He was speaking before the Likud convention, which has become a settler stronghold in the last few years, and it may be that he wanted to placate them. The sense he left at the end of his remarks, however, was of a prime minister who’s burying his head in the sand. It is as if Netanyahu refuses to recognize the fact that in the near future, the internal and international political realities will close in on him and that he will have to make decisions on the Palestinian issue.

However you look at his remarks, they are not words that herald a diplomatic horizon. These are not the words of a leader in whose name accelerated diplomatic negotiations are now taking place with the goal of solving the conflict between Israel and the Palestinians on the basis of a two-state solution. There was not a trace of an effort in his speech to prepare the hearts and minds of the Israeli public for an historic agreement with the Palestinians.

The prime minister delivered his speech before a half-empty hall. Only about 400 of the 3,500 delegates of the Likud Central Committee bothered to come to the Israel Trade Fair and Convention Center in Tel Aviv. Netanyahu was himself dragged to the convention against his will. He despises these party gatherings and fears them. The last time he attended an event of the Likud institutions was in May 2012, and it ended in bitter disappointment. Netanyahu left the conference hall in shock after he understood that he was apt to lose to rookie Knesset member Danny Danon in the vote for chairman of the Likud Central Committee. To avoid almost certain humiliation, he fled the scene, leaving behind him a hall brimming with skullcap-wearing settlers.

There are some who claim this event was a formative moment for Netanyahu, the moment he understood that he had lost the Likud and that the party was out of his control. Since then, the chairman of the Likud had not set foot in a committee gathering, until Dec. 18. The purpose of the meeting was to vote on a resolution meant to block any possibility of a future merger with Foreign Minister Avigdor Liberman’s Yisrael Beiteinu. The resolution would have limited Netanyahu’s capacity for political maneuvering, but he thwarted it at the last minute in a legal battle in the Likud’s internal court. Only following the success of his legal challenge was Netanyahu convinced to attend the conference.

After the vote was canceled, many of the conference participants left, thus the prime minister found himself speaking to lots of empty chairs. The audience that remained in the hall was apathetic and impatient. Without a doubt it was one of the most boring Likud conventions in recent years. Even Netanyahu, who has always been known for his rhetorical talents and his ability to stir the crowd and even electrify it, seemed dull. He wasn’t heckled, but he didn’t receive enthusiastic applause either. These are not good signs for a serving Likud prime minister who has always received a rousing welcome in the past.

This event is another manifestation of the growing disconnect between the chairman of the Likud and his party. Netanyahu should direct the blame for this situation, at least some of it, toward himself. Since being elected prime minister for the second time, he has avoided contact with field operatives and scorned party politics. His lack of interest in what’s taking place within the Likud has enabled elements of the extreme right to take over Likud institutions right under his nose.

Even now, however, it seems that this is the last thing that concerns the prime minister. As long as there is no politician who represents a significant leadership alternative among the Israeli public, Netanyahu can do almost anything he wants — or alternatively, he can do nothing and continue to hold power. In other words, this week too, there are no reasons or signs to think that Netanyahu is headed toward a historic decision.