Iranian woman use cosmetics at an increasing pace, increasing the demand even for counterfeit products. 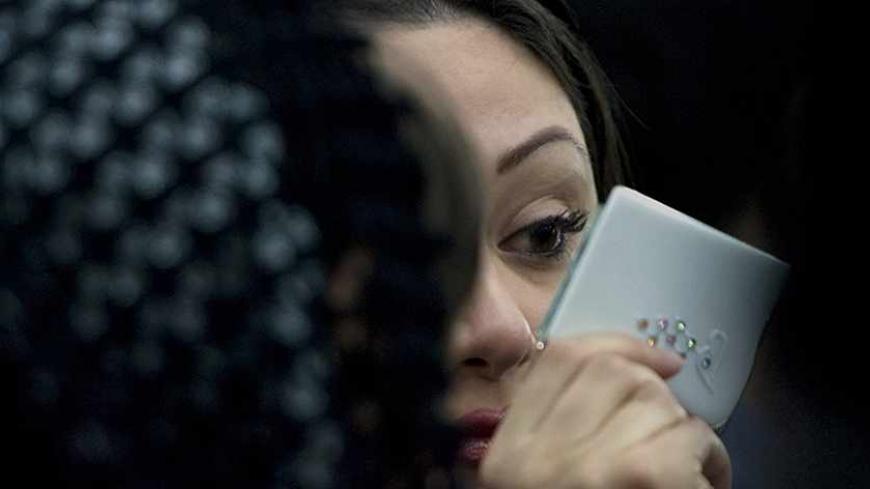 An Iranian woman puts on makeup as she waits for a concert by the Iranian singer Hamid Asgari at the Interior Ministry building in Tehran, Apr. 24, 2008. - REUTERS/Morteza Nikoubazl

Self-confidence, success at job interviews, maintaining married life, finding a husband, following social trends — these are among the common answers Iranian females from around age 14 and up give when asked why they apply makeup when leaving the home. Sometimes the makeup is applied quite heavily.

Mahtab, a homemaker, tells Al-Monitor that she would never leave her home without makeup, and her husband sometimes makes fun of her for feeling the need to be fully made up when she leaves home at 6:30 a.m. every weekday to buy bread. This shopping spree is hardly an outing, since Mahtab says she only exits her vehicle for a few minutes to queue up for the fresh and delicious Iranian bread sangak. She says, “I simply cannot drive without makeup, it’s like driving without my eyeglasses. I don’t care whether anyone notices me, I must at least wear eyeliner and my red lipstick at all times.”

Mahtab is not alone. Makeup is a large industry in Iran and demand for makeup products has increased at such a fast pace that Iran has become a major destination of counterfeit products.

Recent research on cosmetics usage in Esfehan province shows that 31.7% of girls between 15 and 19 follow the example of foreign TV shows they watch via satellite. This number is certainly higher in the capital, where the modernized and Westernized population is greater.

Iran is, after Saudi Arabia, the highest consumer of cosmetics in the region, and holds seventh place in the entire world.

While there are no official numbers regarding the percentage of of cosmetic usage for the country, some unofficial statistics show that Iranian women are the biggest consumers of counterfeit cosmetics; these products bear famous European and US brand names but are produced in China and other countries.

Approximately 80% to 90% of all imported cosmetics are, according to official statistics, counterfeit products expertly manufactured in Thailand, China or Turkey, which bear fake labels and are smuggled mostly through the western and southern borders of Iran.

Fariba, a dermatologist who owns a private practice in Shiraz, tells Al-Monitor that she asks her patients to stay away from cosmetics with foreign labels; because cosmetic products that are made in Iran are regulated, most of them have reasonable quality and the expiration dates are clear and solid. She says, “Most women who see me fairly regularly to improve their skin condition argue that they’d rather pay more and buy foreign products, because they simply trust those products more than they trust Iranian products.” She believes that part of this is because consumers distrust government regulations and part of it is because there is a unique attraction to foreign products. “Even though these cosmetics are smuggled into the country through neighbor countries and are generally not produced in the West,” Fariba says, “the mere fact that they have Latin letters and characters imprinted on them seems to suffice.”

Because the government does not keep tabs on Iranian households’ cosmetics expenses, estimates on cosmetics spending have come from the few published research papers that have focused on the topic in Iran. Iranian market analysts have concluded that the annual market value of cosmetics is around $2 billion, and that Iranian females ages 15 to 45 make up about one-third of cosmetics consumers in the Middle East.

Market analyst Saied Samadi published a research paper in the Iranian quarterly magazine Development of Market Engineering in which he introduces the cosmetics market as one of the purest, fastest-growing, most attractive, yet least-known markets in Iran’s economy. He indicated that the cosmetics market is generally slighted by both manufacturers and investors.

A number of Iranian health and beauty publications constantly warn women about the potential dangers of applying nonregulated makeup. Iranian pharmaceutical and beauty production companies produce cosmetics and beauty lotions, anti-age creams, and many other beautifying items, mostly utilizing safe and standard material, according to the Health Ministry. But a large number of Iranians tend to have weaknesses toward  foreign products, and many trust non-Iranian cosmetics much more than they do similar Iranian products, even though there is always a high risk of these sorts of foreign products being unsafe, expired, or having containters partially filled with ink, as tests in chemical labs — albeit private, nongovernmental ones — have shown time and time again.

Other than the issue of extra attention paid to foreign-made cosmetics, and the reality of some considering the Ministry of Health untrustworthy, some women solely and simply prefer to follow the trend of buying smuggled cosmetics at a high price to further relate to their peers. All of this, of course, is true mostly in the middle, upper middle and affluent classes of society.

Even more conservative and traditional families have encountered this trend. Traditional Iranian men have been known to dislike the heavy makeup their daughters, wives or sisters wear. Nowadays, though, while that reluctance still exists, it is certainly not as common as it used to be.

Maryam, a nurse who works in a luxury hospital in Tehran, tells Al-Monitor that her father scolds her whenever she spends a long time in front of the mirror, even though she is long divorced and now lives by herself. She says she has gotten into shouting matches with her dad several times in the past, but now that he is older and has less patience for arguments, and she is less sensitive and more used to his traits, they tolerate each other more.

Maryam tells Al-Monitor that she even takes showers wearing waterproof makeup, and moderate to heavy makeup makes her feel good about herself. She adds, “What really annoys me is the attitude I get from some of my patients’ wives, particularly if the patients are younger. Even taking the patients’ temperature and smiling or making small talk while doing it irritates some wives, and apparently leads them to think that I’m flirting with their husbands. I have coworkers who are pretty but don’t wear makeup or wear very little of it, and they don’t get that kind of attitude. So other than nurses’ reputation for being flirtatious, the only thing that separates women like me seems to be wearing a lot of makeup.”

Much of the Iranian government’s efforts to limit or stop women from wearing makeup has been, and still is, in vain. Women pretty much have only their faces to show because they are obliged to be covered up (and a number of them would not choose to cover up if they had freedom of choice), so they get creative with the little that they are allowed to display, and many of them tend to overdo their makeup or even get plastic surgery.

It seems that many Iranian women are loyal to practicing the old Persian expression, “Kill me if need be, but make me pretty.”