While Lebanon has struggled to remain neutral and uninvolved in Syria’s conflict, Tripoli has come to mirror the volatile dynamics of its larger neighbor. 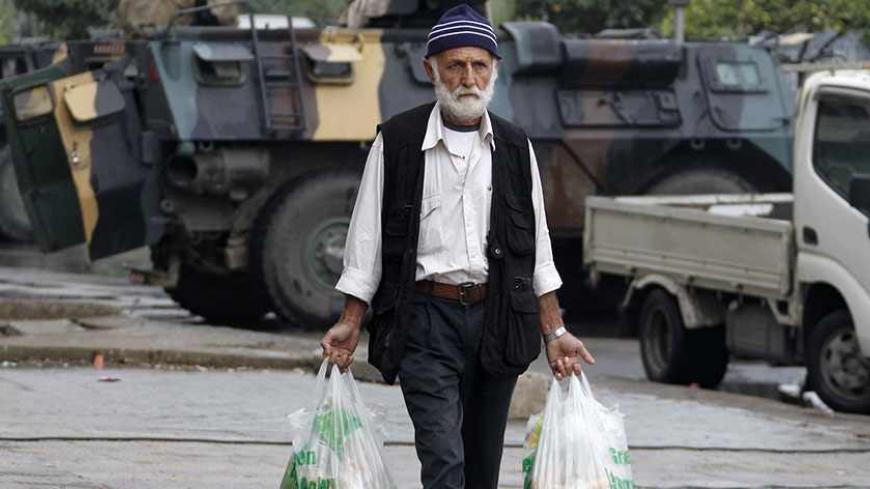 Tripoli, the so-called capital of northern Lebanon, is regarded as the flash point that clearly shows the extent of the Syrian crisis’ impact on its smaller neighbor. Since the outbreak of the events in Syria, the security situation has worsened in Tripoli, which is demographically considered the capital of the Lebanese Sunni Muslim community.

To a large extent, the demography of Tripoli resembles a microcosm of Syria. While 400,000 Lebanese Sunnis reside in Tripoli, a few thousand Lebanese Alawite citizens reside in the city’s Jabal Mohsen neighborhood, located on a low-lying hill. The Alawites are called the 18th sect in Lebanon, and they are truly a minority in Tripoli, just as Syrian Alawites are a minority in Syria with its overwhelming Sunni majority.

Residents of Jabal Mohsen are loyal to the regime of Syrian President Bashar al-Assad and his picture hangs in their mostly modest houses. This is while the Sunni residents of Tripoli raise the flags of the Free Syrian Army (FSA), Jabhat al-Nusra and lately those of al-Qaeda and the Islamic State in Iraq and al-Sham (ISIS). The rift in Tripoli, against the backdrop of the Syrian crisis, seems to be a replica of the one in Syria. The resemblance has reached its farthest degree, since the fighting in Syria has been practically implemented in Tripoli in the past few months, where it resulted from the exchange of fire between the Alawite residents of Jabal Mohsen and the Sunni residents of Tripoli.

Moreover, under the Sunni political climate in Tripoli, civil and leftist forces have receded, and extremist Salafist groups have prevailed instead. The imams in the mosques have become emirs in the place of the traditional and historical political leaders, who had led the Sunni street in Tripoli for decades. In short, the traits that characterize the Syrian opposition have all come to characterize the Lebanese Sunni scene in Tripoli. This is while the Alawite residents of Jabal Mohsen have also became more extremist in expressing their religious identity and fiercer in defending it, in a way interrelated with the ferocity with which the Syrian Alawite minority defends itself.

Just as the residents of Syrian rural areas that have allied with the Syrian revolution are relentless in besieging the cities that the regime controls, the poor rural Sunni areas in northern Tripoli — such as Akkar — have started to send fighters to support their Sunni residents in their fighting against the pro-Syrian regime in Jabal Mohsen. As time passes by, the fighters of Tripoli’s rural areas have become powerful in [the city], and have repeatedly attempted to break through red lines under the pretext of supporting Sunnis. They do so by carrying out attacks to topple the besieged Alawite neighborhood of Jabal Mohsen, whose residents just have one outlet on one side linked to a Christian area controlled by Suleiman Franjieh, one of the most prominent Christian allies of the Syrian regime in Lebanon.

In short, the conflict that has taken place in Tripoli geographically introduces this city as part of Syrian events on Lebanese territory. This interrelation continues to grow as the violence in Syria rage on. The last aspect reflecting the depth of this interrelation is when extremist Sunni residents of the city opened fire against Alawite residents of Jabal Mohsen simply because they were walking through their neighborhoods. This development indicates rising sectarian sentiment based on the situation in Syria.

With regard to this sort of high sectarian and regional tension that reflects the nature of the regional conflict in Syria, the Lebanese army is unable to assume any role that can settle the issue to create stability in the city. The army fears that going too far in oppressing radical Salafist groups would be seen as taking sides with the Syrian regime’s allies in Lebanon. It also fears that attempting to impose strict military measures against Jabal Mohsen would result in accusations of complying with the friends of the Syrian revolution. Moreover, the Lebanese army fears that involving itself in a fierce mission against violence in Tripoli may cause the sectarian rift among the Lebanese citizens to be moved to its ranks.

The situation on the ground in Tripoli, which just saw its 18th round of violence, shows the dangerous repercussions of the ongoing violence there on Syria’s neighbors. In Lebanon, the political circle is now convinced that the events in Tripoli will only be halted if a political settlement to the Syrian crisis is found.