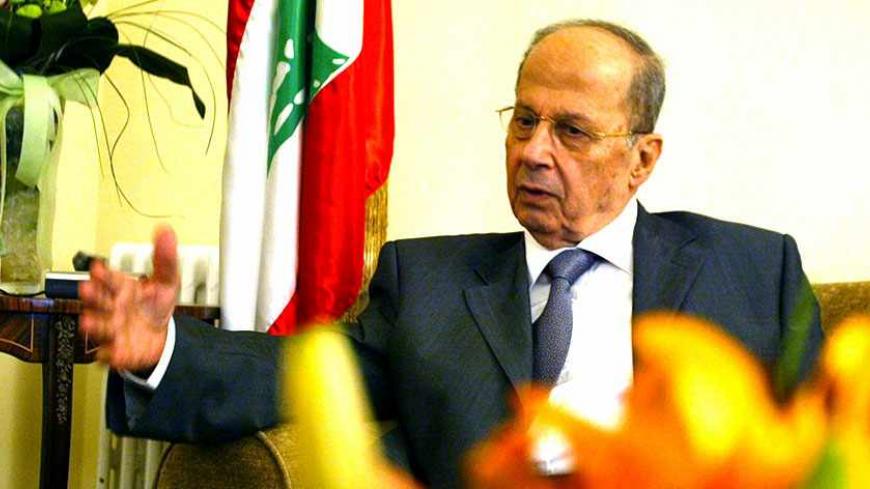 RABIEH, Lebanon — Gen. Michel Aoun, leader of the Free Patriotic Movement (FPM), the second largest bloc in Lebanon’s parliament, blames the Lebanese government for not closing its borders early on to terrorists and weapons from Syria.

“Lebanon is paralyzed right now because of the Syrian problem,” Aoun said in an exclusive interview at his home in Rabieh.

“The problem of Tripoli, of the northern borders, of Arsal, before in Saida — it was a mistake that our government — the prime minister — didn’t take any decision about them. He said to get far away from the Syrian war. We said OK, that’s right. But he left the borders of Lebanon open for the trafficking of weapons, for sending — well, not militias, the terrorists — from the port of Tripoli to the north of Syria as to install a line of logistics to Arsal, and then to the Qalamoun region.

“So this situation generated the conflict right now with Hezbollah, with the others,” he said. “It was a big mistake.”

Aoun, who was forced to leave Lebanon in 1990 after leading the unsuccessful “liberation war” against Syrian occupation forces and could not return until after the Syrian withdrawal from Lebanon in 2005, has since allied the FPM with Hezbollah in the “March 8” political alliance.

Aoun explained Hezbollah’s intervention in the Syria war as the consequential spillover of the conflict because of Lebanon’s fractious politics and porous borders.

“It was a response, you know, to the activities of the people, of the Future Movement. And I think you know, militarily, [Hezbollah leader Hassan Nasrallah] has done a good thing. He pushed the battle to the Syrian territory. It was about to start in the Lebanon territory between Arsal and Hermil, and those are Sunni and the others are Shiite, and so it will be … extended to the Bekaa Valley,” he said.

Aoun predicted that the Syrian army and Hezbollah will soon defeat rebel forces.

He said: “Right now, he is fighting with the Syrian army to finish with the east side of the mountain between Lebanon and Syria. And they have maybe one week, two weeks, and they will finish with them,” especially with winter and snow approaching.

Aoun dismissed the capabilities of jihadist forces fighting in Syria as fully dependent on foreign support. He said, “The jihadists are not true forces, you know, by themselves. They are helped by money, by weapons, by many things. They have everything from outside. Without being helped by others, they will not be very strong.”

Aoun welcomed the “joint plan of action” signed Nov. 24 between Iran and the five permanent members of the UN Security Council plus Germany as potentially affecting Iran-Hezbollah-Israel relations in Lebanon.

“It’s much better,” Aoun said. “We need less nuclear weapons, and I think the problem will be also discussed with Israel in the future, when they have more confidence in both sides.”

“I think Iran was using Hezbollah to make pressure on Israel. When the problem is settled up, the Iranians don’t need Hezbollah anymore. Certainly they will have good relations — it doesn't harm us. We would like to have good relations with everybody. But as a normal choice, Iran — I don’t think they will spend enough money to maintain this force, because it is very expensive.”

Aoun said peace between Lebanon and Israel will follow peace between Israel and Syria, adding, “When Israel has to leave the Golan Heights so this Shebaa Farms will be transferred to Lebanon. “I always said, it’s not a problem with Israel. The problem must be regulated with Syria.”

“Everybody has to evolve,” he said. “We have to adapt ourselves to a new situation. All politics, all the time is dynamic. It’s not something rigid, fixed, static.”