The Israeli medical community is debating the use of medical marijuana for veterans who suffer from lasting post-war trauma. 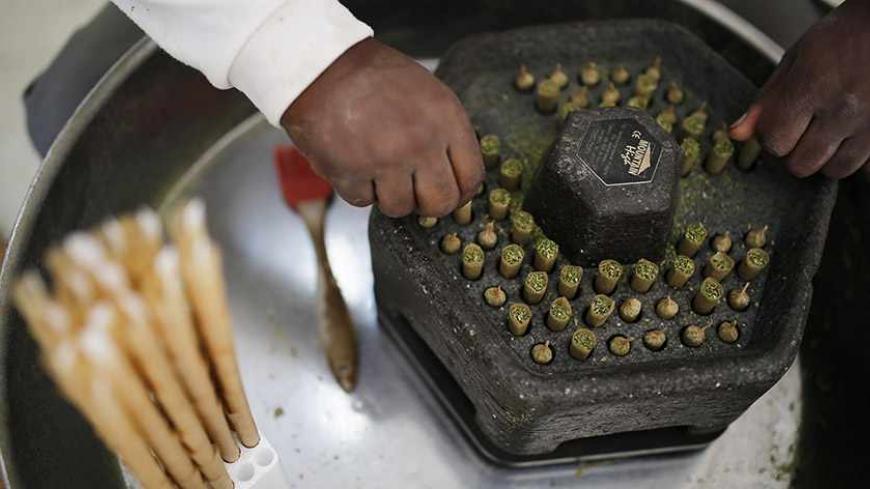 A worker rolls the tops of newly prepared joints filled with marijuana at a plantation, near Nazareth, May 28, 2013. - REUTERS/Amir Cohen

In Israel, the topic of medical marijuana evokes a heated response among patients and doctors alike, perhaps more than any other subject. Patients are convinced that it is a wonder drug, capable of performing miracles. Doctors, however, aren’t convinced that marijuana is a drug like any other. Some of them consider it an addictive narcotic, and some doubt its efficacy as a cure. The state thinks differently.

Over the next few days, Minister of Health Yael German will submit a bill to regulate the use of medical marijuana for the many patients who use it. Every year, the circle of Israelis for whom cannabis use is approved has been expanding. A decade ago, only 300 patients had permission to use it. Just three years ago, their number had increased tenfold, to 3,000. This year, the number of patients with permission to use cannabis shot up to 11,000. By next year, the number is expected to reach 14,000.

Yet, despite marijuana's popularity, the Israeli Medical Association informed the government that it is opposed to any law designed to recognize cannabis as a drug. As if that were not enough, a team of medical specialists submitted a position paper to the health minister, asserting that medical cannabis is not a medication, and that there are as yet no clear standards regarding dosages or use in treatment. They went on to express their concerns regarding its long-term effects.

The debate over medical marijuana is not limited to its use as medication, but also includes who can receive it and who will distribute it. Every year, thousands of new patients request a prescription for the drug, yet to date, just 20 doctors throughout the country are authorized to prescribe it for their patients. If the law passes, 10 more doctors will be similarly licensed. So far, prescriptions are given to patients with cancer, AIDS, multiple sclerosis, Parkinson’s disease and various intestinal afflictions. Patients suffering from other conditions and illnesses have been added to this list over the past few years, particularly people with mental disorders and those suffering from post-traumatic stress disorder (PTSD).

The pressure that these patients have put on the Ministry of Health and members of the Knesset is enormous. Not a week goes by without some Knesset member or other receiving a heart-wrenching appeal from a patient pleading for the approval for wider uses of the drug, claiming that it can reduce their pain and give them reason to live.

Most recently, there has been an increase in requests from combat veterans with PTSD as a result of their military service. Maj. Nissim Zlouf is one of them. Five years ago, he participated in a medical study intended to assess the influence of cannabis on the emotional state of combat veterans dealing with the condition. Zlouf and some of his brothers in arms who fought in the 1973 Yom Kippur War discovered after the fighting that they all suffer from nightmares and severe sleep disorders that impede them from leading a normal life.

As a result of this study’s findings, it was decided to make marijuana cigarettes available to them. In exchange, they were required to give up the drugs they took previously, including psychiatric medication. After just a few days, they discovered that the cannabis had changed their lives. For the first time in years, they were able to fall asleep without any difficulty.

“It turned me into a human being,” says Zlouf. “I went back to functioning as a father to my children and as a husband. My life was turned around. It went from one extended nightmare to a normal life.”

Even 40 years after the bloody battle he fought over Mount Hermon, Zlouf still has a hard time freeing himself from the memories of the war. The battle that changed his life took place Oct. 8, 1973, yet he still lives it as if it happened only yesterday. He was just 19 years old when the long wail of the siren pierced the sanctity of Yom Kippur in his Netanya neighborhood. When he met up with his friends from his unit, he learned that Syrian forces had seized Mount Hermon and captured the Israeli soldiers stationed there.

Within just a few days, after some of the fiercest fighting imaginable, his unit had lost 89 soldiers. The casualties included officers of all ranks, as well as the soldiers with whom Zlouf had spent the last year. Nissim knew them all. They were like family, and he was one of the few who survived the fighting. When he finished his military service and tried to get on with life as a civilian, he discovered that he still bore emotional scars that would not heal. After undergoing a psychiatric assessment, he was diagnosed as suffering from a severe case of PTSD and classified as a disabled veteran, making him eligible to receive a monthly stipend from the Ministry of Defense.

Cannabis changed his life, until the day the clinic stopped writing him a prescription to buy the drug, explaining that the state had yet to regulate its legal use. Zlouf and his friends faced a crisis. Having no other choice, they found new ways to obtain the drug. Instead of paying 400 shekels (some $114) per month, Zlouf found himself paying thousands of shekels on the black market instead. He was left with very little of the 7,600 shekels (about $2,100) per month that he receives from the Ministry of Defense. He appealed to Minister of Defense Moshe Ya’alon to renew the prescriptions of veterans with PTSD that had been treated at the pain clinics.

“I suffer from a severe case of PTSD as a result of the Battle of Mount Hermon, and I cannot humiliate myself just to get permission to use cannabis,” he wrote. “I am asking you to save me and my friends.”

Medical cannabis has provided him with a few hours of blissful sleep every night. For the five hours that he sleeps now, he is free of all those images of the battlefield. He needs a few grams of it every night before he can fall asleep. Without the cannabis, his nights revert to long, recurring nightmares of the war.

“The Yom Kippur War is not over for me, or for my friends who somehow stayed alive,” he says, “and I worry that it will not end until we are all dead. It may look like we survived the war, but the truth is that we did not go back to living a normal life.”

Though the government is caught between the proven effects that cannabis has on patients and the concerns of doctors as to its ultimate effectiveness, on Dec. 15 it began the process of approving the new law. Israel is one of the most progressive countries in the world when it comes to the approval of cannabis, and many other countries are watching to see the outcome.