Boycott threat should be a wake-up call to Israelis

While settlers are creating an almost irreversible reality in the occupied territories, even those opposing the idea of an international boycott on Israel might change their minds. 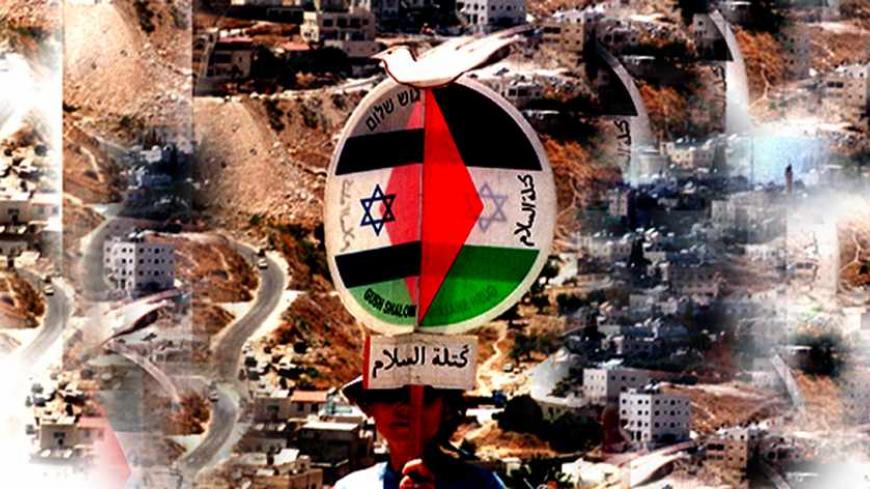 An Israeli woman from the left-wing peace group Gush Shalom holds a sign with the Israeli and Palestinian flags over the backdrop of Jerusalem, July 15, 2000. - REUTERS

The topic of a boycott on Israel is considered one of the most explosive and sensitive in Israeli society. Until recently, only the farthest extreme of the post-Zionist left even considered supporting or calling on the world to boycott settlement products or even the State of Israel itself, in response to the continuation of the occupation. All these years, the vast majority in Israeli society has been unified around the outright opposition to boycotts of any kind, certainly a boycott on Israel. The call for a boycott was the province of a handful of extreme leftist professors and several ephemeral organizations on the extreme left such as “Gush Shalom,” which joined forces with the Arab-Israeli Knesset members. All of them together are perceived as detached from reality and lacking any relevance to Israeli society and its political map. They work in the margins, without any real influence on what’s happening in the country.

Personally, for all these years, I vehemently opposed the various calls to boycott Israel. I considered organizations that contributed or called for such boycotts loathsome. I also considered and still consider Israeli organizations (mostly Arab) that worked to put Israel Defense Forces officers on trial abroad especially despicable.

Imagine for yourselves that in Britain, or the United States or France, British, US or French organizations would work to collect personal information on officers and combatants of that country and pass this information to external prosecutors and call on them to arrest those officers and combatants and put them on trial for their activities in Afghanistan, Iraq, Mali, Libya or any other place on earth.

Imagine for yourselves that a US organization would expose the personal information of the members of the special forces unit that killed Osama bin Laden, and call to arrest them and put them on trial for war crimes. What’s more, in Israel’s case, its fighters aren’t working in far-off lands, but defending the country itself, the right of its citizens to live in security.

I considered the calls for boycott especially hypocritical, particularly in light that, for all these years, Israel has extended a hand of peace many times and been rejected. The peace proposals of former Prime Ministers Ehud Barak at Camp David, Ehud Olmert, the Clinton plan, the negotiations at Taba [in the Sinai] and Annapolis, all these included Israeli agreements to create a Palestinian state in 97% of the West Bank (with territorial swaps). Those who didn’t pick up the gauntlet are the Palestinians. Therefore, if the international community wants to boycott someone, it should boycott all those to blame, not only the convenient and popular target, the State of Israel, which suffers from serious international inferiority because of the great number of Islamic and unaffiliated nations that support the Palestinians automatically, even when they attacked Israel with hundreds of suicide bombers following the Camp David summit in 2000.

This has been the history, up to now. But in the last year, a slight change has taken place in Israel, and also with me. Right now, it can’t be seen by the naked eye. It’s hard to discern. It’s not yet public. And still, it’s happening. Hesitant voices, which insist on remaining anonymous at this stage, from the legitimate left and even the political center in Israel, are starting to articulate another opinion. This opinion stems from despair.

Until now, many in Israel believed that the two sides must be allowed to talk, that the Israelis and Palestinians should be encouraged to hold negotiations that would bring a two-state solution and the end of the conflict. But the fact is that many in Israel are starting to believe that this attempt has no chance. That the settlers and their powerful lobby have succeeded in creating an irreversible reality. That there’s no force in Israel that is capable of removing tens of thousands of settlers. That there’s no feasible political scenario that will enable Israel to carry out honest and real negotiations, or implement any kind of agreement, that is reached — if it is reached — by the two sides. The feeling in the Israeli left and center is that the settlers won. That they have set the facts on the ground.

This despair has led people to new conclusions. The first to reach these conclusions were leading Israeli businessmen, those who are exposed to what’s happening in Europe and the United States, those who manage large international businesses and have global factories or business ventures. They know the extent of the problem. They are starting, in dribs and drabs, and surreptitiously, to consider transferring the bulk of their businesses from Israel abroad. They fear for the future of the Zionist enterprise, the future for the Israeli economy, for the future of their children and grandchildren in Israel, which was a democratic country striving for peace, but is turning, in their opinion, into something else entirely.

These people are starting to talk, in private conversations, about their hope that the world would take the initiative and save Israel from itself. That the Europeans would boycott Israel, maybe even the Americans. That only thus, with force, would the world convince Israel that the current situation can’t go on. That this status quo is misleading and could bring disaster.

I recognize this change first-hand, because it’s happening with me, too. When I see that Prime Minister Benjamin Netanyahu has lost his relevancy in the Likud Party, which is now controlled by settlers and extremists. When I understand that the real goal of [Trade and Economy Minister] Naftali Bennett’s HaBayit HaYehudi Party is to perpetuate our control of another people, a goal wrapped like a present with shiny cellophane and candy to sweeten the bitterness. When I understand that the possibility of persuading Israelis that we must separate from the Palestinians is dissipating, in light of the fact that many believe that it’s possible to continue to hold on to the current situation without paying the price.

When all this is happening around us, hope sometimes sneaks in that the enlightened world will do our work for us. It’s commonly said that the Arabs only understand force. Unfortunately, it seems that the Jews, too, only understand force. Only the understanding of the Israeli society that the continued control of the Palestinian people will greatly endanger the quality of life in Israel, its legitimacy, its continued prosperity and security, will allow us to implement the necessary separation between the two people.

I still oppose boycotts, in all shapes and from all directions. Last week, it became known that the University of Haifa considered granting an honorary doctorate to the Israeli Nobel Prize winner, Yisrael Aumann, but that the university’s board of governors decided not to do so, “in light of the political positions of professor Aumann.” Here's an example of a boycott coming from the left, against a Nobel Prize winner, whose only sin is having right-wing opinions. This is a terrible decision by a university that is being exposed in all its shame, in danger of losing its very legitimacy. It is Aumann’s right to hold any opinion without it damaging his academic achievements.

To my regret, it’s hard to say the same thing regarding Israeli policy in the territories. For 40 years, Israel has entrenched its hold on the West Bank, in a belief that the problem would resolve itself somehow. It hasn’t been resolved. We can’t continue to fool everyone, all of the time. At some point, we will have to make the difficult decision, and undo this Gordian knot, not to be dragged with it into the depths.

It seems that as time passes, our ability to reach this decision is diminishing. As time passes, it turns out that we might need someone, or something, that will force it on us. And so, I don’t think we need to call on the Europeans to boycott us, but if and when they do so, we will be able to understand their position.