The illegal weapons trade in Iraq has seen a spike in activity as armed sectarian militias grow more numerous and weapons are smuggled into Syria. 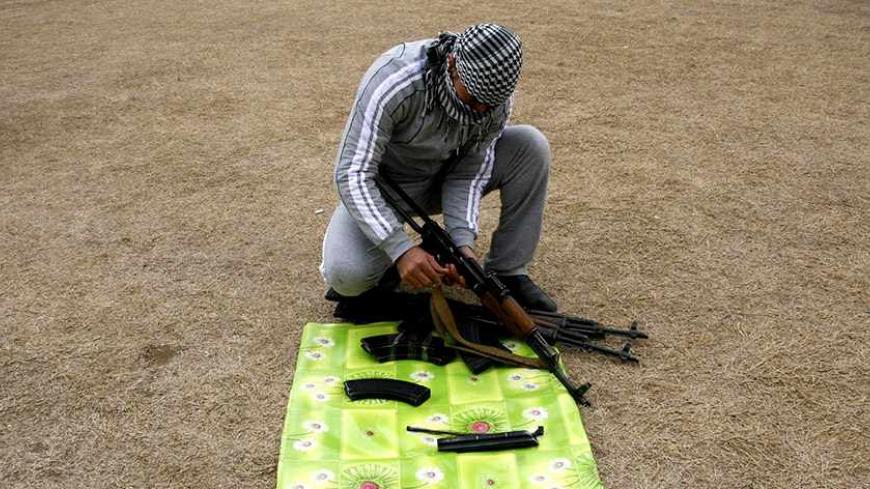 A weapons dealer checks AK-47 rifles at his house before selling them to smugglers who will then transfer the weapons to Syria, near Mosul, Feb. 16, 2012. - REUTERS/Stringer

More than two years ago, Mohammed al-Fatlawi was selling light weapons to men who felt threatened by security militias, those who were involved in carrying out acts of tribal revenge or even those who wished to acquire arms just to brag about it to their families or friends. Fatlawi is a young, dynamic man who takes the risk of going to areas filled with Iraqi security members to buy or sell firearms for a small profit of no more than $50. However, intensified fighting between the Syrian opposition and President Bashar al-Assad’s regime helped him expand his arms trade business.

A policeman with the Ministry of Interior, young Fatlawi said, “The price of weapons has risen in Iraq as they are being gathered and smuggled to Syria, while the demand in Iraq has dropped significantly.” Fatlawi buys weapons in Baghdad from households giving up weapons. He gathers these arms at his home east of Baghdad, then delivers them in batches to a prominent weapons dealer. The latter then moves them to Anbar province to sell them to another dealer who will then smuggle them into Syria. Before the outbreak of the revolution in Syria, the price of a Kalashnikov assault rifle was about $100, the price of a Glock pistol was $1,900. Now these prices have increased nine-fold, with assault rifles costing as much as $1,000, according to Fatlawi

Fatlawi told Al-Monitor that the majority of dealers gather weapons and sell them to higher-up dealers. The young man, who sees the risk of his activity, uses the privileges of the Ministry of Interior to transport weapons in areas of Baghdad filled with security services. At the end of last year, the Iraqi government acknowledged the existence of weapons smuggling and fighters into Syrian territory across Ninevah province in northern Iraq. For its part, the Syrian government at the start of the protests also declared the confiscation of arms shipments and the entry of 400 fighters into Syrian territory.

In August 2013, US Secretary of State John Kerry said that more must be done to prevent arms smuggling between Syria and Iraq, while Iraqi Minister of Foreign Affairs Hoshyar Zebari confirmed Iraq's commitment “not to provide money, weapons or oil to the Syrian regime.” Moreover, while Parliamentary Security and Defense Committee MP Hassan Jihad denied in a statement to Al-Monitor any previous discussion by this committee of the subject of smuggling weapons to Syria, MP Mazhar al-Janabi confirmed that the committee had in fact broached the matter a year ago.

Janabi told Al-Monitor, “The Security and Defense Committee summoned the commanders of three military troops and Anbar chief of operations. They were asked whether there was a case of smuggling, to which they answered that these cases are negligible.” Janabi added, “In the event weapons are still smuggled to Syria, this would mean either a lack of interest or ability to preserve the country.”

Syrian writer Dara Abdullah said, “There has been no accurate information about the quantities of weapons smuggled from Iraq to Syria since the start of the Syrian revolution.”

“Just like when the border from Syria into Iraq used to be controlled by the Syrian regime upon the US invasion, the border from Iraq to Syria is now open and freely accessible under [Iraqi Prime Minister Nouri] al-Maliki’s control.” Abdullah, a writer opposed to the Assad regime, warned that “the most dangerous thing is not the entry of arms to Syria, but the armed sectarian militias.” He continued, “These militias have played a major role in the sectarianization of the Syrian conflict, increasing civil congestion and turning the Syrian revolution from a social movement into a civil sectarian conflict.”

An Anbar border guard told Al-Monitor, “There are smuggling operations but they are not as important as was declared.” The officer, who spoke on condition of anonymity, said, “There are some groups smuggling prohibited substances and weapons.” He indicated that a small number of smugglers had been killed and a large number arrested during the last period after monitoring their movements and detecting their method of transportation. “The security situation is stable and there is no danger to the security of the Iraqi border, since Iraqi forces have all matters related to security under control,” said the officer.

Syrian journalist Wael al-Nabwani pointed out to Al-Monitor that arms smuggling from Iraq may be divided into two categories: “The first is the international, organized smuggling by Iran, which has been supplying the Syrian regime with large quantities of weapons, as well as Shiite and Sunni jihadists ... The second is the smuggling by arms dealers of light weapons through unorganized operations that have eventually led to chaos in Syria.”

Nabwani said, “The parties that provided most support to the smuggling of arms were Maliki backed by Iran, followed by President of the Iraqi Kurdistan Region Massoud Barzani and his government.” He elaborated: “The worst weapons exported to Syria are in the form of human bombs [suicide bombers].”