With each successive outbreak of violence or natural disaster, Iraqi leaders, particularly Prime Minister Nouri al-Maliki, continue to point the finger of blame at their opponents. 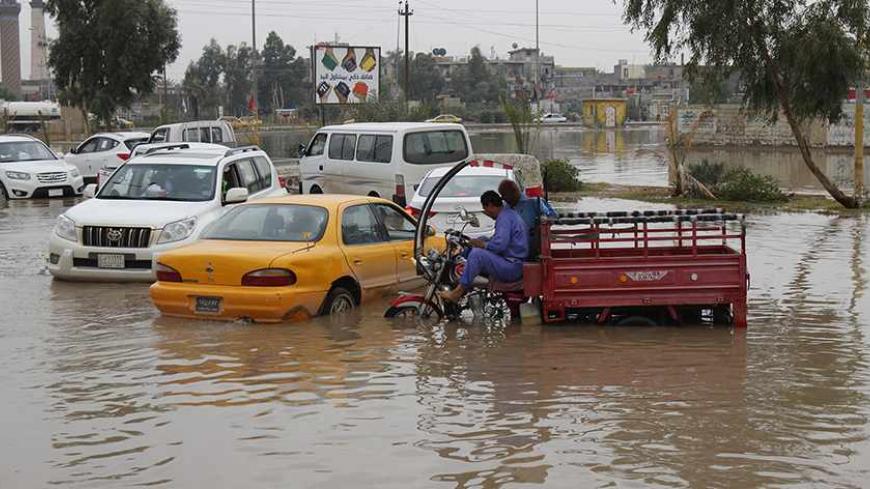 Vehicles are seen along a flooded street after heavy overnight rains in Baghdad, Nov. 11, 2013. - REUTERS/Ahmed Saad

A responsible government is mostly distinguished from other governments by the presence of state institutions that represent the different governmental aspects and responsibly answer to the expectations and criticism of citizens. This is what Iraq is missing amid sectarian tension and a lack of professionalism and competence in choosing officials. Consequently, these officials have no sense of responsibility when dealing with the issues of the country.

Although the prime minister should ideally represent the main responsible figure in the executive authority, we constantly see him blaming the failure of governmental institutions in doing their jobs on political parties, external factors or historical reasons. In his latest statements, Iraqi Prime Minister Nouri al-Maliki tried to justify the government’s inability to solve the problems brought on by rain and floods, which have incurred heavy losses in the cities of the south, in a completely irresponsible way. First, he blamed the Baath regime, although the rule of this party ended over 10 years ago and Maliki has held the reins of power for eight years. Then, he criticized the citizens for their carelessness in maintaining the waterways. Finally, he focused on the role of terrorism and those he called "political enemies," a label he has been in the habit of using. He did not apologize to the citizens for the government’s inability to fulfill its duties and responsibilities, although apologies are usually in order in such situations in democratic countries.

Maliki has been using blame in his political rhetoric intensively to deal with the constantly worsening crises and problems in Iraq. He has also grown accustomed to using psychology in his speeches, which shows a sort of escapism from his responsibilities.

On that note, a few months ago, he spoke about the reasons behind the government’s failure to keep its promises to provide security, electricity and various essential services.

He blamed both his allies and opponents, of all parties, without admitting that his own administration was flawed or defective. Maliki distanced himself from the security, services and economic problems plaguing the country, believing that senior officials in his government and his allies were providing him with misleading information. He concluded that he was not directly responsible for any failure, blaming his ministers, since he did not consider himself to be an expert in ministerial affairs.

This behavior shows that the Iraqi government failed to establish a state of institutions that is capable of professionally dealing with issues and problems, and personal considerations prevailed in the state's departments. One can clearly identify that the departments of the executive power were not unified under a comprehensive and harmonious banner. On the contrary, power was divided among people and political parties that are incapable of working together. They do not represent one comprehensive team and do not share a collective responsibility toward the people. Therefore, each of them blames the others for their incompetence, distancing themselves from assuming any responsibility for what happens.

This has become a general rule followed by all government officials, especially since the prime minister himself shrugged off responsibility toward his country, despite taking up the highest executive position.

Citizens have become puzzled, uninformed about the failures affecting their daily life and unable to recognize who should be held accountable in each case.

Finally, despite the problems faced by citizens due to the lack of responsibility on the part of the Iraqi government, political parties are seizing the opportunity to evade their responsibilities and blame their opponents for dereliction, thus reducing the chances of losing votes.