While all of Iraq’s disparate political factions claim to seek the very change voters are demanding, none so far have taken any action to truly convince their electorates. 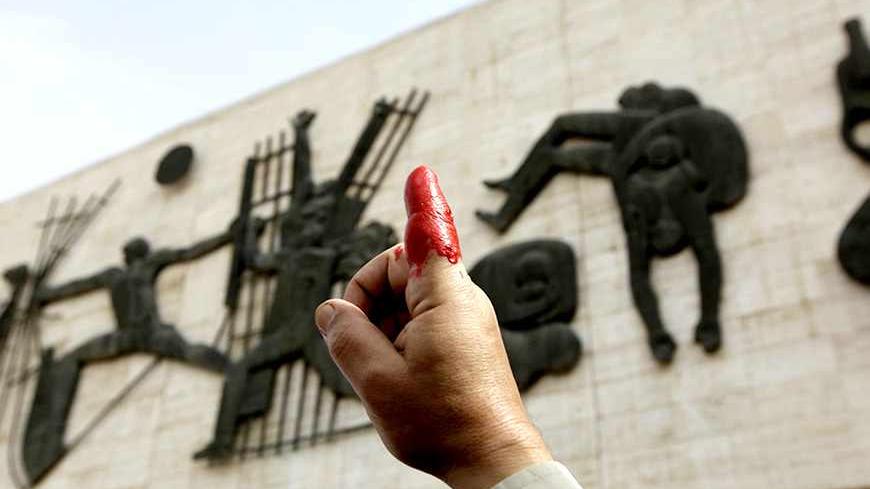 A protester holds up his red-inked finger during a demonstration to show his disapproval, Baghdad, March 7, 2010. - REUTERS/Saad Shalash

No one in Iraq is satisfied with the country’s situation. The term “change” is on everyone’s lips, from the top of the ruling pyramid to the ordinary man in the street.

Although the goals of change in Iraq are not quite clear, everyone agrees that change can only be brought about through elections.

The low number of voters who showed up to update their records in preparation for the legislative elections in April 2014 is worrisome and raises questions about the will for change. The figures leaked from the Electoral Commission indicate that fewer than 500,000 people updated their records days before the expiration of the statutory period.

Even though leaders such as Prime Minister Nouri al-Maliki and religious leader Muqtada al-Sadr called on voters to update their records, this failed to raise the participation rates to numbers significant enough to make an impact.

This raises concerns of political leaders such as Ethel Nujaifi, the governor of Mosul, who said that only 4% of Mosul’s Arabs showed up to update their records.

This was accompanied by accusations directed at the Electoral Commission about failing to urge citizens to update their records.

For its part, the commission defended its position and confirmed that it has assigned mobile teams to update people’s records on the ground.

This entire controversy, however, does not change the reality of the situation. The desire to bring about change is not accompanied by practical steps, and this applies to the Iraqi political quarters, but most importantly to the voters who feel frustrated by the prolonged political and economic deficits plaguing their country.

The real risk currently facing the political life in Iraq is wide popular despair as far as change through elections is concerned. If the elections continue to be boycotted and the people continue to abstain from participating in political life, politicians may find themselves isolated from the street.

These political circles, including the government, the opposition and the old and new political forces, have failed to offer tangible evidence for the voters about reform. However, the preoccupation with political conflicts and the use of all kinds of weapons in the mutual attempts to make the other lose — while pushing the country into a deep pit of corruption, suspicion and distrust — kept more voters from contributing to change through the ballot box.

The public’s confidence cannot be restored through statements made on TV urging voters to participate in the elections, and it is no longer useful to use sectarian and ethnic fears to persuade the people to bear the risks and threats of terrorist forces and head again to the polls. Iraq needs real proof from its leaders about their desire for change. It also needs sacrifices and compromises to achieve security and move the country forward.

Without great sacrifices, voters will never feel the sincerity of their politicians — who have been continuously reproducing themselves since 2003 — and they will gradually keep their distance from the polls, until the elections start lacking the legitimacy of the street.

No one wants to see such a disastrous situation. Avoiding it, however, does not happen through slogans and petitions, but through persistent action that will eventually restore confidence.