Nasrallah hints at change in approaches to US, Lebanon

In a recent interview, Hassan Nasrallah signaled Hezbollah's possible willingness to reconsider its relations with the United States and accept full integration into the Lebanese state. 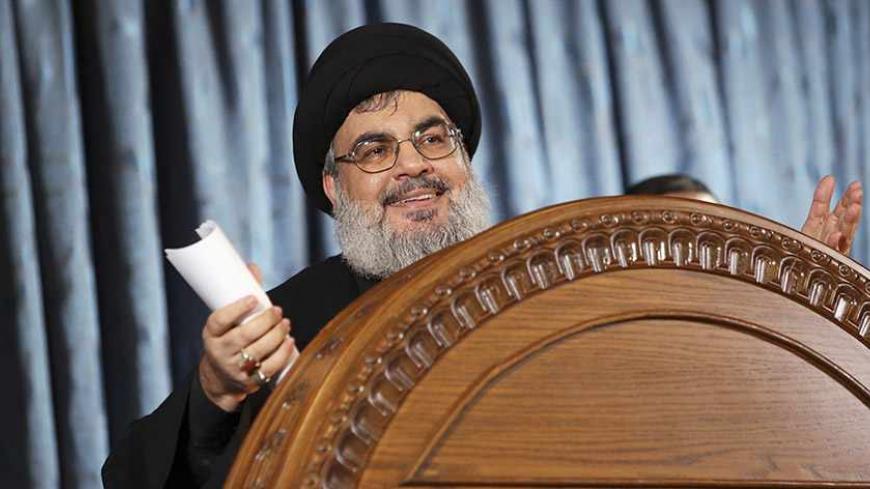 Wittingly — or perhaps unwittingly, because of the rapid acceleration of events — Hezbollah’s opponents have not shed much light on the latest major positions expressed by Secretary-General Hassan Nasrallah in his Dec. 3 interview on Lebanon's OTV. Lebanese cultural and intellectual circles, however, are preoccupied with two issues raised by unprecedented assertions by Nasrallah. One issue is external, involving Hezbollah and Iran’s vision of the United States, while the other concerns the Shiite organization’s vision of Lebanon as a nation and a state.

While talking about the nuclear agreement between Iran and the West, Nasrallah was asked whether a normalization of relations between Washington and Tehran was possible. He replied, as printed for the first time here in Al-Monitor:

In terms of principles, and even during the era of Imam Khomeini and then Imam Khamenei, the rhetoric of the Iranian leadership would always say: Our problem with the Americans is different from our problem with the Israelis. The problem with the Israelis is that they are a trespassing and illegal entity that has imposed itself on Palestine and the people of Palestine. Therefore, the Iranian position as far as Israel is concerned is decisive, and it has not changed for a single moment ever since the founding of the Islamic Republic until this very day.

As far as the US is concerned, however, Iranians would always say: The day the Americans recognize our rights, treat us with respect, negotiate with us as peers, give the people of this region their rights, abandon their hegemonic approach, sense of entitlement, arrogance, wars and monopoly, we will be ready to negotiate with them, be it directly or indirectly.

To properly assess this, observers should recall the mobilization slogans used by Nasrallah's Shiite organization against Western policies and governments, specifically against US policies in the Middle East. There were those who considered the United States the Great Satan. Others demonstrated while chanting “Death to America.” As for the US perspective, one should consider the numerous times Washington has accused Hezbollah of targeting US interests, citizens and diplomatic representatives, in Lebanon and abroad, from 1983 until today. It is this contentious history between the two parties that led Hezbollah to be added to the US list of terrorist organizations and drove Washington's efforts in pushing to have it added to the European Union’s terror list in July 2013.

From this context, one can understand the significance in the change in Nasrallah and Hezbollah's discourse. Nasrallah seems to be telling the Americans, “In principle, there is no hostility between us, and there is no absolute, sacred or existential war. Yes, there is a dispute as a result of our rejection of certain policies, but when these policies are amended, meeting with you becomes possible, acceptable, legitimate and even 'permissible,' in the religious sense of the word.” This last element cannot be ignored when trying to understand someone like Nasrallah, who is both a political and religious figure.

The second issue raised by the words of today's strongman in Lebanon, and perhaps of interest to other countries of the region, is that when asked whether he and his party have a project in mind that is bigger than Lebanon, Nasrallah rushed to deny it. Asked whether he acknowledges the legitimacy of “Lebanon as an entity” — referring to the constitutional provision for the acceptance of Lebanon as a state within its constitutionally delineated borders — Nasrallah asserted for the first time, “We support the finality of the entity, as announced by Imam Musa al-Sadr. Day after day, the veracity of every political orientation that acknowledges the finality of the Lebanese entity becomes more and more apparent. There may be other ideologies that do not agree with this rhetoric, but I would like to tell you that Hezbollah is with the Amal movement and Imam Musa al-Sadr. I would also like to declare tonight: Hezbollah believes in the finality of the Lebanese entity.”

Experts in Islamic movements and of the history, establishment and doctrine of Hezbollah are aware of the historic nature of this position. The Shiite organization began in Lebanon in 1982 under the banner of “Islamic Revolution in Lebanon,” back when its ideologues rejected recognition of Lebanon as a nation and a state.

Afterward, with the declaration of the organization's first official document in 1987, it seemed clear that it was keen to avoid dealing with such issues as the recognition of the Lebanese state, nation and identity and even citizenship. Those familiar with the development of Hezbollah know that its decision to participate in parliamentary elections in 1992 — and therefore recognize the existence of the state called Lebanon — required religious discussions within the party and with religious authorities in Iran. These talks led to approval to enter the Lebanese political arena. There were, however, objections, as evidenced by then-Secretary-General Subhi al-Tufayli’s decision to leave the organization because he did not agree with the “Lebanonization” of Hezbollah.

Thus, the issue of Hezbollah's intellectual and ideological position continued to be suspect, until the party signed a memorandum of understanding with Christian leader Gen. Michel Aoun, on Feb. 6, 2006. On that day, Hezbollah made clear that it was no longer hesitant to declare its Lebanese identity and its open and full commitment to the state and the nation.

One point, however, remained to be addressed, with observers and intellectuals continually raising the following questions: Although Hezbollah recognizes these concepts now, will it remain committed to them in the future? Does Hezbollah declare that it accepts Lebanon as the entity, or state, of all its people, as stipulated in the Lebanese Constitution since 1990, knowing that this statement is taken from a document announced by Sadr, the first leader of the political Shiite movement in Lebanon in 1974?

This issue was again raised when Nasrallah announced a new political document for Hezbollah in December 2009. The document, which was largely seen as a coup vis-a-vis the party's first manifesto from 1987, was deemed to favor the Lebanonization of Hezbollah's ideas and principles, but made no clear reference to the finality of the Lebanese entity.

Well-informed sources in Hezbollah explained to Al-Monitor that the phrase "Lebanon as an entity" was actually contained in the draft document of 2009. When voted upon, however, it garnered an overwhelming majority, but not unanimity. Given that Nasrallah was keen on unanimous approval, the decision was made to postpone including the term until a later date and have the 2009 document issued without it.

Ever since, and especially with the outbreak of conflict in Syria and its implications, discussion about this point had continued within the party until those who had previously had reservations became convinced, and an unspoken declaration was made: Hezbollah believes in Lebanon as the home for all its people. There had not been an appropriate opportunity for the party to declare this historic decision until Nasrallah's Dec. 3 interview, where he openly and officially settled the matter for the first time. This and Nasrallah's pronouncements on the United States are significant developments for Hezbollah that everyone must consider given their importance to the future of Lebanon and the region.