Mohammad Harfoush looks at Hezbollah, one of Lebanon’s most polarizing organizations, in part one of a survey of the factors that led to the movement's formation and its present status in Lebanese society and politics. 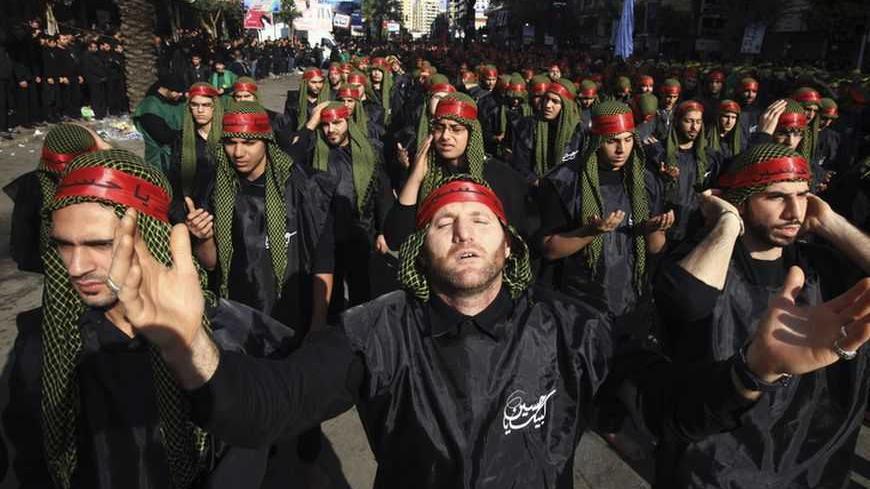 Hezbollah supporters gesture while praying during a ceremony to mark Ashoura in Beirut's suburbs in 2012. - REUTERS/Khalil Hassan

Hezbollah is considered the most influential and widespread among Islamic parties and movements in Lebanon and the broader Middle East. It is a party that cannot be compared to any other contemporary political Islamist movement, be it fundamentalist or revivalist. Hezbollah's beginnings, discourse, programs, agendas and goals are unlike any others.

As a result of Hezbollah's political transformation, coupled with its long history of resisting Israel, the organization has taken on a number of traits that differentiate it from other movements, with its fame spread beyond Lebanon to Arab and Islamist circles abroad. Despite this, its apparent abandonment of the exclusionary political tone that characterized its discourse for most of the past twenty-five years was not enough, until now, to guarantee its full assimilation into the Lebanese political arena, characterized by complicated religious, sectarian and political pluralism.

Hezbollah as born from a number of different Islamic factions professing a variety of alliances and affiliations. Some came from the Amal Movement, while others espoused the ideologies and philosophies of Imam Sayyed Musa al-Sadr. Some were influenced by the success of the Islamic revolution in Iran, while still others were swayed by prevalent activities taking place in neighborhoods and mosques.

The Israeli invasion of Lebanon on June 3, 1982 — at a time when Lebanese Islamist dignitaries were attending an Islamic conference in Tehran on the International Day for the Oppressed — sparked the first attempt at creating a resistance movement. When news of the invasion reached attendees, Iran immediately launched an initiative, the first step of which was to send a delegation to Syria to discuss with officials there the possibility of offering the Lebanese support in resisting the invasion. The Iranian delegation received Syrian approval for troops from the Iranian Revolutionary Guard to cross Syrian territory and enter Lebanon to take part in the conflict.

At the same time, nine Islamist movement leaders met to establish a constituent body that would become the nucleus of Hezbollah’s formation. Among their ranks were Sheikh Sobhi Toufaily (the party’s first secretary-general), Sayyed Abbas al-Musawi (the second secretary-general), Sayyed Hassan Nasrallah (the current secretary-general), Sheikh Mohammed Yazbeck (member of the party’s current Shura Council) and Ibrahim Amin al-Sayyed. This constituent body worked to formulate the main ideas that would define the principles of the Islamic resistance movement. Their first meeting took place two weeks after the Israeli invasion began, and during it they laid out their plans prior to the arrival of the Revolutionary Guard to Lebanon.

This nine-member constituent body was short lived. It was soon replaced, in the early part of 1983, by a five-member committee called the Shura Council, which began meeting with the blessing of the Iranians. The council thus became a reference point for all Islamists until it decided, in May 1984, to adopt the name Hezbollah (Party of God) and to increase the council’s membership to seven.

The founding of the party had begun in 1982 when a group of Muslim believers found it necessary to establish a framework whose aim was to tackle the state of weakness that prevailed in the fight against Israel and attain higher Islamic goals. Some Islamists joined the party’s ranks, as did neutral moderates, until the process coalesced into the Hezbollah of today, as Deputy Secretary-General Sheikh Naim Qassem explained.

The emergence of the Iranian Islamic revolution in 1979 no doubt had a great and direct effect on the formulation of the party’s ideologies, as well as providing it with academic and jihadist inspiration. In the wake of the Iranian revolution, the Lebanese Islamic Dawa (Call) Party dissolved itself, and its members began working within the framework of the Islamic revolution in Iran. Furthermore, many members of the Amal Movement began taking part in activities associated with the revolution, among them Ibrahim Amin al-Sayyed, head of the movement’s office in Iran at the time and who later would become one of Hezbollah’s most prominent figures.

The event that played the biggest role in the establishment of the party was Lebanese President Elias Sarkis’ formation of the Rescue Committee in 1982 to deal with the consequences of the Israeli invasion. The Amal Movement’s leader, Nabih Berri, was a member of the committee, as was the hardline Christian leader Bashir Gemayel. This did not sit well with a great number of the more staunchly Islamist Shiite members of Amal who decided to break away from the movement. Hussein Musawi for example, a prominent figure in Amal at the time, objected to Berri’s acceptance of a seat on the committee and called for Iranian arbitration in the matter.

The dispute was referred to former Iranian ambassador to Damascus Ali Akbar Mohtashemi, later interior minister and a member of the Iranian Shura Council, who ruled against Berri’s participation in the committee. Berri did not abide by the decision, however, prompting Musawi to submit his resignation from Amal and to form Islamic Amal. This move led to his being expelled from the movement’s Politburo.

It could be said that the establishment of Hezbollah as a party in Lebanon began when members converged from various factions, the most important of which were the Dawa Party, the Amal Movement, Shiite clerical figures (sheikhs and scholars), former prominent individuals in Palestinian organizations (Fatah and others) and Lebanese national parties as well as independent movements of Islamic youths.

Hezbollah’s popularity exploded after 1984, when it rose up against the US military presence in Lebanon and the Israeli occupation of the south. It gained its extremist image as a result of its bombing of the US military barracks in Beirut and its taking of foreign hostages. Initially, it shunned the limelight and focused on the slow and deliberate formation of secret cells. The hijacking of TWA Flight 847 in 1985, however, drew all eyes to the party, despite the fact that it denied any involvement in the matter. Hezbollah thus became much more active in the Lebanese political and military arenas. In an open letter published in 1985, it called for the establishment of an Islamic state, an end to Maronite hegemony and the party’s rejection of becoming part of the traditional Lebanese political game. This affirmed its uniqueness and set it ideologically further apart from other Islamist factions.

Hezbollah achieved some political and military victories during the battles that pitted it against Amal during the period 1988–1990, at the expense of the latter losing some of its credibility. At a time when Amal took part in the government’s formation, Hezbollah intensified its attacks against Israel and its allies in south Lebanon, demanded that the Lebanese political system be changed and stressed the need for Islamic rule to prevail in Lebanon. Most important, Hezbollah proved its superiority over Amal in its ability to mobilize people and its effective use of advertising campaigns.

The end of Shiite infighting and the disarmament of militias in 1991 proved to be a challenging time for Hezbollah. The party found itself compelled to change its agenda as a result of the governmental changes occurring in Iran and the rise of Hashemi Rafsanjani. This led it to reduce its focus on the immediate formation of an Islamic state in Lebanon. Furthermore, Rafsanjani’s government seemed less intent on expediting Islamic revolutionary goals in Lebanon and more interested in maintaining good relations with Damascus.

With time, Hezbollah seemed to become more pragmatic and open. Sheikh Qassem confirmed this when he wrote the following: “The party had a duty to demand the imposition of Islam. We did not propose the establishment of an Islamic state. Whomever is not convinced of that is free not to. We do not believe in the usefulness of religious coercion. Islam loses its raison d’être if it is imposed by force. We are not willing today to espouse slogans that have no chance of being implemented just for the sake of maneuvering or introducing them to the public. We propose the slogan of mutual acceptance and understanding with others on the basis of the most suitable [political] system despite the fact that we favor an Islamic one.”

Mohammad Harfoush is a Lebanese journalist reporting for the Kuwaiti Al-Anbaa newspaper and is the author of Eritrea: Basic Facts.