Hezbollah's decision to again delay its general congress may be linked in part to regional developments, including Bahrain and Syria, writes an Al-Monitor correspondent in Beirut. 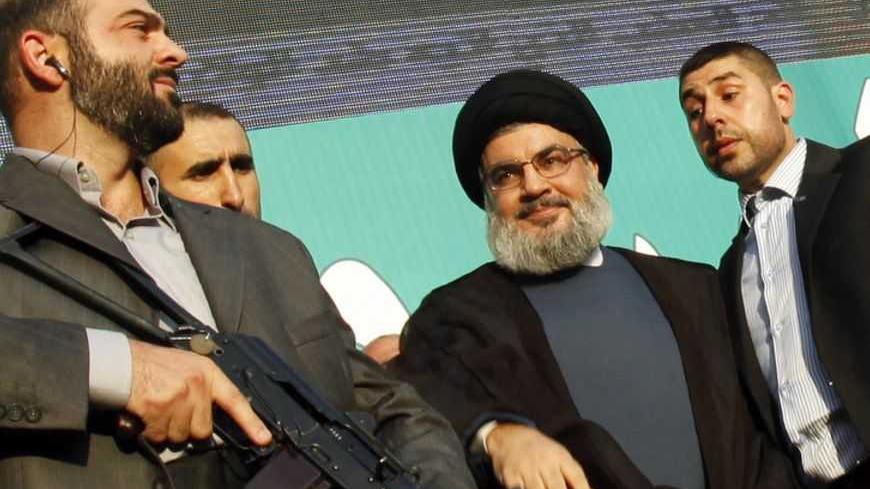 Hezbollah was supposed to hold its general congress at the end of last year, but it was postponed until this spring, and then postponed again to next September. The main reason for these repeated delays is the situation in Syria, and Hezbollah is inclined to set its priorities in accordance with these developments. It goes without saying that Hezbollah is strategically affected by the situation in Syria. The group is linked to the Syrian regime through a strategic partnership, as part of the Iranian-led "axis of resistance" in the Middle East.

Hezbollah, given its preoccupation with monitoring the events in Syria, was forced to postpone the congress until later this summer. If Hezbollah had held this congress — which would be the party's 10th annual congress — according to schedule, it would have been a special occasion, given that the date coincided with the 30th anniversary of the party's birth. In fact, there are two different dates marking the birth of Hezbollah. The first is the date that the formation of the party was announced. This occurred on Feb. 16, 1984, when the party's spokesman at the time, Ibrahim al-Amin, announced the party's political charter in a message titled "The Open Letter." In this document, the party responded to the question, "Who are we?" The second date that could be considered the "birth of the party" is when the group launched its covert resistance mission against the Israeli occupation in many areas throughout Lebanon in 1982.

Since 1986 — when the party held its first general congress — Hezbollah has held nine consecutive general congresses. During the first congress, Hezbollah defined its internal structure, which clarified the role of its internal institutions and the mechanisms for electing party officials. These officials range from the secretary- general, who is the head of the party, to the members of the Shura Council, which is the highest leadership body and is headed by the secretary-general. They also include members of the "jihadist council", which deals with military and security decisions and comprises seven members, including the secretary-general. It should be noted that the party's most prominent military commander, Imad Mughniyeh, was a member of the jihadist council until his assassination in 2008.

According to the party's rules of procedure — outlined in its first charter — the secretary-general can only be nominated for this post for two terms. This article, however, was amended a few years later, allowing Nasrallah to remain in his post for an unlimited number of terms. Yet at this time, there are leaked reports from within party circles that Nasrallah will not seek an additional term as secretary-general in the congress to be held this coming September.

This does not mean that Nasrallah intends to give up his powers, but rather that the party's leadership structure will change in a manner that shifts the extensive powers currently entrusted to the secretary general to a new post under the title of "Supreme Guide." This post will be awarded to Nasrallah, while the post of secretary-general, with decreased powers, will go to one of the party's nonreligious figures. The most likely candidate for this post is MP Mohammad Raad, who is currently the head of Hezbollah's parliamentary bloc, in addition to serving as a member of the party's political office.

Sources close to the party told Al-Monitor that this restructuring is still the subject of debate within the party. Others have suggested an alternative, which would involve transforming the secretariat-general into an institution, no longer headed by a single figure.

There is an objective and strategic reason that has led Hezbollah to postpone its 10th general congress for the third time in less than a year: the events in Syria. The party prefers to wait until the situation in Syria becomes clear, because this would help it realize how it should restructure its new leadership, and the nature of the main ideas that will be included in its political charter at the internal, regional and international levels.

Those observing the internal workings of the party have noticed that the unexpected events in Syria have caused the party much confusion, and subsequently it is inclined to wait to restructure its internal leadership until it becomes clear where the developments in Syria are heading. Here it should be noted that Hezbollah cooperates with the Syrian regime in terms of exchanging services and protecting strategic interests, equivalent to a raison d'être in a number of aspects. The party depends on Syria as a geopolitical lung, providing Hezbollah with weapons, and protection in a number of different ways.

Secondly, over the past few years Hezbollah has seen a significant growth in its organizational structure, representing a threefold increase of what it was during its last general congress in 2009. There are recent developments that have led to this growth, most notably the emergence of internal security challenges represented by the appearance of Lebanese forces with conflicting political views. The conflict between the two sides has reached the point that rounds of fighting could break out at any time, similar to what happened on May 7, 2008, when Hezbollah took control of Beirut and crushed opposing Sunni Lebanese militias that it felt were threatening it with arms.

In recent years, Hezbollah established a military wing to respond to what the party considered internal security challenges. This wing includes the so-called "Resistance Brigades," which have thousands of members. Hezbollah wanted to ensure that there was no organizational link between the military wing and the party's primary "jihadist body," which was characterized by a complex structure and is exclusively responsible for preparing for a confrontation with Israel.

The bottom line in this regard is that the emergence of new political and military wings within Hezbollah's structure, means that the party will need more time to prepare for its upcoming general congress. This is particularly true given that Hezbollah is currently preoccupied with a complex political and security situation both domestically and throughout the region.

The third reason for the postponement of the 10th general congress is related to the second reason mentioned above, and this is related to the party's attempt to add new institutions and organizational ranks to its structure, which would enable it to absorb more members within a partisan framework. The party now has hundreds of thousands of members, including both active members and those with a certain organizational link (it is said that there are 300,000 members). These members are distributed among various partisan sectors, including students, professionals, economists, military and security elements and financial advisors.

Today, the party needs to create new divisions within its organizational structures, which — according to a leading official speaking to Al-Monitor — should be more flexible and effective, and less bureaucratic. This same leader admits that, according to a wide segment of Hezbollah's leadership, it suffers from many cases of corruption. This is something that cannot be rectified merely through repressing corruption and creating and expanding internal "accountable, legitimate authorities" (equivalent to the concept of civilian judicial authorities), but also must be addressed through developing a comprehensive regulatory vision.

There is yet another highly-important reason, and this is that the party needs to take the necessary time to prepare the political statement that it will present at the 10th congress regarding the Arab revolutions. Hezbollah sources admit that there is a type of political and intellectual confusion regarding this topic. The Arab revolutions dealt a severe blow to the idea of Islamic unity that the party has called for in all of its documents. This is particularly true given that the Syrian popular movement, to which Hezbollah is opposed, entails a sectarian conflict between Sunnis on the one hand and Alawites and Shiites on the other.

Similarly, the popular movement in Bahrain, which the party supports, is interpreted in the Gulf not as a reform movement, but rather as an attempt by Iran to stir Bahraini Shiites to protest against the Sunni governance that exists in the Arab Gulf states. Hezbollah is studying the position that it will take during its 10th congress regarding the Arab revolutions with much caution. The source of Hezbollah's caution here stems from its strategic alliance with the Syrian regime on the one hand, and its desire not to let its conflict with the Islamic movement in Syria damage its already fragile relationship with the Muslim Brotherhood in Egypt on the other.

There are those who believe that the party's desire to avoid any embarrassment when it comes to taking a historic position on the Arab revolutions in an official statement issued during its 10th congress, is one the important reasons that has led it to decide again and again to postpone this congress.