In meetings with Gazan's intellectuals, Hamas Prime Minister Ismail Haniyeh sought opinions on the Strip’s most pressing issues from those outside the movement. 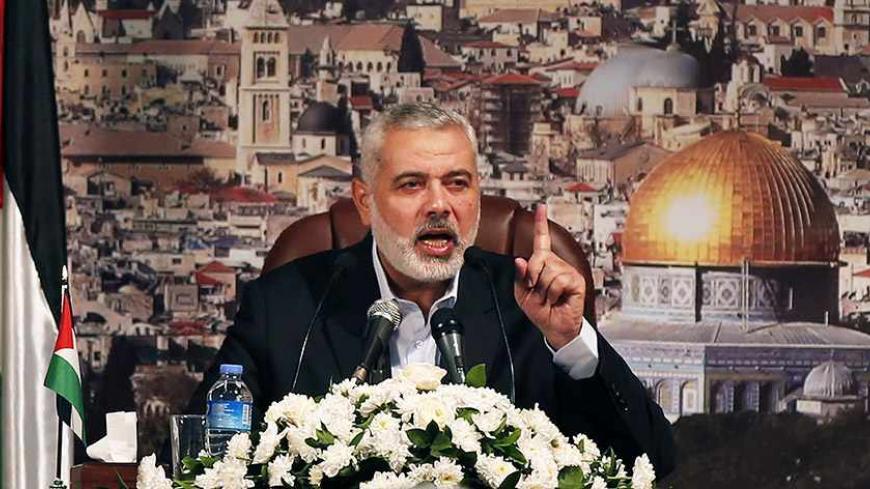 During the end of November and early December, Gaza was the scene of two closed-door meetings held by Prime Minister Ismail Haniyeh with a number of intellectuals, authors, academics, university professors, public opinion leaders, representatives of civil society and journalists. These meetings came as part of his continuous effort to keep communications open with this important segment of Palestinian society. Al-Monitor’s reporter had the opportunity to attend both of them.

At the first meeting, Haniyeh gave a lengthy speech about local and regional political developments; the second meeting gave attendees the opportunity to engage in discussions over the course of eight whole hours.

At the two meetings at the Commodore Hotel on Gaza’s coast between Haniyeh, who's the deputy chairman of Hamas’s political bureau, and more than 50 personalities belonging to elite academic, cultural and journalistic circles, mostly from outside the Islamist movement that supports Hamas, which many ideas and suggestions were proposed to him, and criticism was leveled against some aspects of the Gaza government’s conduct.

Haniyeh talked about the Palestinian cause, negotiations with Israel, the agreement on a national platform and the restructuring of the Palestine Liberation Organization. Haniyeh also affirmed Hamas’ desire and readiness to reconcile with Fatah according to agreed upon mechanisms and its openness toward any proposals that would push for reconciliation.

At the same time, Haniyeh listened to complaints by activists about what they characterized as the imposition of restrictions on public liberties by the Hamas government’s security apparatus. Such restrictions include the barring of peaceful demonstrations, the summoning of journalists for questioning and the closure of press offices in Gaza for security reasons that many do not find convincing.

In this regard, Haniyeh said that he appreciated the complaints, but that the security situation in Gaza was very sensitive. Though he did not acknowledge any of the repressive behavior perpetrated by security agencies, he instructed the Interior Ministry not to impose additional restrictions. Haniyeh pointed out that overall, the state of public liberties in Gaza was good, that political forces were exercising their supervisory duties and rights organizations were conducting field visits to detention centers. He asked judicial authorities not to prosecute anyone for writing antagonistic political articles or press releases.

Concerning Hamas’ foreign relations in the region, particularly with Egypt and Iran, Haniyeh reiterated the movement’s previously declared position of noninterference in the affairs of neighboring countries, especially Egypt and Syria.

In response to demands by some of the attendees that distance be maintained vis-à-vis Islamist groups in the region, Haniyeh said Hamas is a Palestinian movement, elaborating, “Despite our ideological closeness to some regional factions — meaning the Muslim Brotherhood — our allegiance is to the Palestinian cause, which determines our path. Furthermore, Hamas does not interfere in the affairs of others.”

There was one novelty in Haniyeh’s rhetoric, however: his request that the attendees, who represented a large swath of political organizations, academic institutions and nongovernmental agencies, form a delegation to visit Egypt to clarify some contentious issues with the country’s authorities. He also asked that the delegation convince Egyptians to exonerate Palestinians of the accusations leveled against them by the Egyptian press and to form good neighborly relations with Egypt devoid of any animosity.

An official source from Haniyeh’s office told Al-Monitor that his meeting with the intellectuals served as a platform to discuss Palestinian relations with Arab and Muslim nations and ways by which they could be bolstered on various levels. The participants suggested many proposals pertaining to the future of relations with Egypt, including the exoneration of Hamas from accusations of meddling in the country’s internal affairs while maintaining an equal distance from both sides of the political divide there. The proposals also asserted Hamas’ determination not to interfere in Egypt's problems, despite Hamas and the Muslim Brotherhood sharing ideologies and policies.

In the meetings, from which the media was excluded, Haniyeh therefore did not mention the ouster of Hamas’ strategic ally, the Muslim Brotherhood. He also did not use the terms “coup” and “return of legitimacy.” This omission stands in contrast with the Hamas-controlled media that continually repeats these phrases. This selective choice of phrasing can be seen as an attempt on his part to minimize the damage to the already tense relations that prevail with the current regime in Egypt.

Concerning Iran and Syria, Haniyeh expressed the desire to address all the different political regional developments. He presented the realignment of his movement’s alliances and Arab relations as proof of the resurgence of these alliances, in light of the stifling crisis that grips Hamas. He refused to use the term “crisis” because according to him, the whole region and world are in a state of crisis, and not just Hamas.

During the two meetings, Haniyeh made public new positions on rapprochement with Iran and opening a new page with Syria. He did this while asserting that Hamas did not need to tempt or beg anyone for anything, and that it does not regret or apologize for its stances just to placate others. It also does not feel that it was in deep enough trouble to necessitate paying a steep price for someone to save it. This approach was welcomed by the attendees, who, nevertheless, expressed concern about Gaza’s government paying the price for the movement’s stances abroad concerning the latest regional developments, which had led to animosity with neighboring countries such as Egypt and Syria.

Certain of those who participated in the meetings said that Haniyeh listened to a few practical proposals made possible by the air of openness that prevailed during the talks about a number of issues, especially internal ones. These issues included those of partnership and reconciliation, in order to convey their proposals to the movement and the government, so that they may benefit from them to shape their future vision pertaining to the Palestinian, Arab and international situations.

The same official source from Haniyeh’s office told Al-Monitor that among the recommendations given during the meetings with intellectuals was the need to expand the scope of political contacts maintained by Gaza’s government. This prompted Haniyeh to make a series of telephone calls to Russian Foreign Minister Sergey Lavrov, President of the United Arab Emirates Sheikh Khalifa bin Zayed bin Sultan Al Nahyan, Secretary General of the Arab League Nabil Elaraby and Turkish Foreign Minister Ahmet Davutoglu, as part of a new approach to open up to the international and regional communities.

In an exclusive interview, Haniyeh’s media advisor Taher al-Nunu told Al-Monitor that the cabinet and Hamas were made aware of the recommendations that emerged from meetings with Gaza’s Palestinian political elites. Most noteworthy among them were those that called for the creation of a national mechanism to implement agreements signed between Fatah and Hamas as a prelude to finding a way out of the continuing deadlock.