During their trip to Cairo, Hamas officials heard a long list of Egyptian security demands in exchange for mending ties, and now incoming leader Ismail Haniyeh must sell the deal or be left to rule the Gaza Strip without Egypt's help. 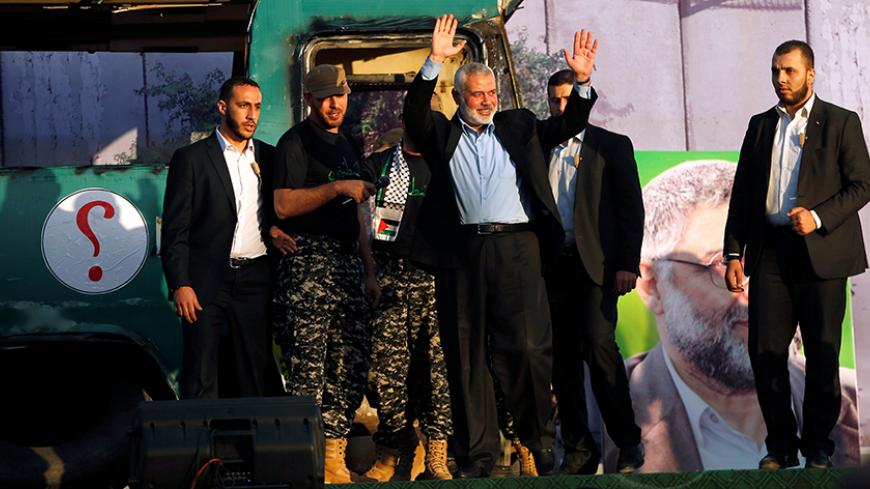 Senior Hamas official Ismail Haniyeh went home to the Gaza Strip after a 4½-month sojourn in Qatar. Haniyeh decided to return from Qatar even though the process of his appointment as Hamas leader had not yet been finalized. Hamas' supreme body, the Shura Council, had elected Haniyeh to replace current political bureau chief Khaled Meshaal.

Residents of the Shati refugee camp in Gaza welcomed Haniyeh with great excitement on Jan. 27, hoping to hear good news from him regarding Hamas-Egypt relations after the series of meetings he held with Egyptian intelligence heads in Cairo. However, Haniyeh kept mum. In the near future, he will have to make one of the most difficult decisions of his life: whether to accept the conditions dictated to him by Egypt for a significant easement of the blockade on the Gaza Strip, or remain entrenched in his position and continue to cope with the harsh situation there.

Almost no one in Hamas today thinks that the movement can continue to rule over more than 1.8 million residents in the Gaza Strip indefinitely without the end of the closure or at least a significant loosening. The head of Egypt’s general intelligence, Khaled Fawzy, knows this, and told Haniyeh loud and clear: You must hand over to us any wanted person we ask for, whether he was directly involved in terror attacks in the Sinai Peninsula or just assisted jihadi agents.

Other Hamas officials who participated in the Cairo talks included Mousa Abu Marzouk and Ruhi Mushtaq, who were stunned by the Egyptian ultimatum. Any such suspects extradited to Egypt could be sentenced to death. Handing over suspects to another state, whether they are Hamas operatives or belong to other organizations, is likely to be seen in the movement as unforgivable surrender and betrayal.

A security source in the Palestinian Authority who is familiar with the content of the Cairo talks told Al-Monitor on condition of anonymity that the Hamas leaders asked to hold negotiations and reach a compromise, but the Egyptians would not budge.

After consulting with Hamas official Mahmoud al-Zahar, Haniyeh floated a proposal: Hamas would allow Egyptian intelligence agents to cross-examine suspects in the Gaza Strip, but not hand them over on demand. It is unclear from this proposal what would happen afterward if the cross-examination indicates involvement of the suspect in attacks against Egyptian soldiers. Would Hamas allow the extradition or demand that legal proceedings take place in Gaza? Either way, the Egyptians rejected the proposal outright. The chiefs of Egyptian intelligence told Haniyeh and his escorts: Either you agree to our demands and receive easements on the blockade and the opening up of a new page in our relations, or you’ll condemn the entire Hamas movement to death.

Haniyeh kept silent on the subject when he returned to the Gaza Strip. But in an interview with Egyptian news agency MENA, Zahar tried to downplay the controversy. “There is an improvement in relations with Egypt,” claimed Zahar, “but certain issues still remain unresolved, issues that need to be resolved.”

The heads of the Egyptian intelligence units gave Haniyeh an incentive to agree to their terms and to convince those in Gaza that the Egyptians are serious about their intentions. Fawzy promised, in the name of Egyptian President Abdel Fattah al-Sisi, that Cairo will now implement a series of easements in the Rafah crossing. The crossing will remain open for longer hours and the quota of transit visas from Gaza to Egypt will be increased. The easements will continue for a few weeks in the hope that Haniyeh will return with a positive answer. If he fails to attain agreement to the Egyptian demand, Haniyeh will be forced to cope alone with the severe ramifications.

But aside from Egypt’s key demand from Hamas, several agreements were reached between the sides in Cairo. The Hamas delegation committed to increasing its patrols along the length of its border with Egypt to avert the infiltration of armed operatives into Egyptian territory. Hamas also agreed to allow Egyptian forces to pursue suspects and conduct searches within Gaza in the course of its operations.

Most surprising, the Egyptians demanded that the Hamas leadership maintain quiet on its Israeli border as well. As security deterioration or violent confrontation with Israel can shake up the entire region, Hamas leaders were requested to carry out a series of steps to prove that the movement is placing less emphasis on resistance activities and more on welfare activities to improve the lives of Gaza residents.

Egypt is using the carrot-and-stick approach. The more that Hamas proves it is shifting its focus toward alleviating the harsh conditions of the residents in the Gaza Strip and the more it accedes to Cairo’s security demands, the more the blockade will be eased and the Hamas regime will be strengthened.