Following a recent workshop, the Arab Water Council has decided to send public delegations from Egypt to other Nile Basin countries to strengthen ties and calm the crisis over water shares. 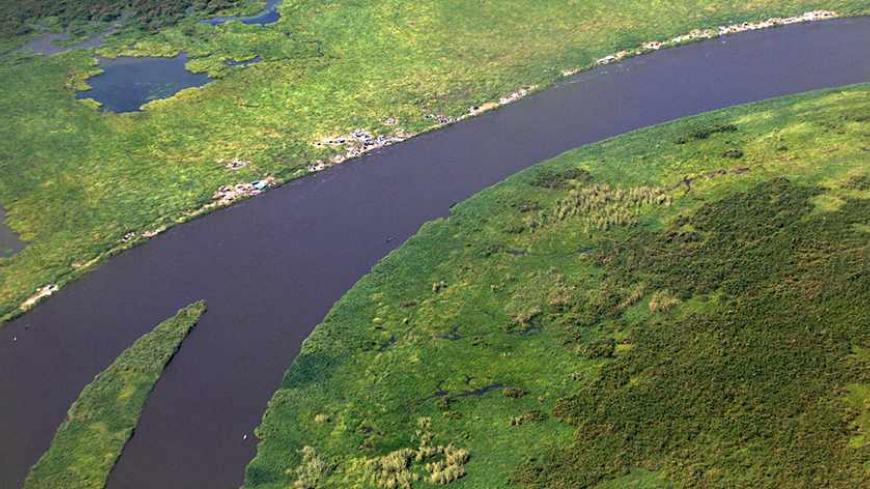 An aerial view shows temporary settlements set up along the banks of the Nile River in South Sudan, Dec. 25, 2013. - REUTERS/James Akena

The Arab Water Council declared the adoption of a public delegation project. This is a new attempt, among the successive Egyptian attempts, to support the ties of cooperation between the Egyptian people and the peoples of the remaining upstream Nile countries, and to open the horizons for deepening mutual trust.

The delegation is supposed to set off from Egypt to the upstream Nile countries every three months. It will include representatives of political and popular forces, intellectuals, folk art groups, artists, singers, university students, doctors and engineers who will work on visiting these countries and making direct contact with people in the streets, far removed from diplomatic and governmental political endeavors.

The idea of the Nile delegation was part of the recommendations of the two-day workshop held by the Arab Water Council on Dec. 1-2. Al-Monitor attended this workshop, during which participants discussed ways of working with civil society organizations to develop an Egyptian action plan. This plan would work on solving the crisis of the current conflicts between the Nile countries over the distribution of the river’s water.

Mahmoud Abu Zeid, president of the Arab Water Council and former minister of water resources and irrigation, asserted at the end of the workshop that the council adopted the project of a public Egyptian delegation in the east Nile countries as a start. The delegation is supposed to travel to north and South Sudan and Ethiopia to communicate directly with the people and to effectively rebuild trust between societies. In the future, the activity of the delegation is supposed to expand to include the remaining upstream Nile countries.

Moreover, the delegation will seek to foster relations between civil society associations and the media in the Nile countries through field workshops, and will establish a water media observatory to exchange information about the Nile Basin. A water database will support the observatory.

The role of the Nile delegation will be supported by other continuous activities throughout the year to build mutual trust among the Nile Basin countries. This will be done through conducting consecutive training sessions in each Nile country under the supervision of the Arab Water Council. One training session will prepare media cadres who are specialized in water affairs. Diplomas will be granted to those who pass the session, thus making them competent to work in media covering Nile water issues. Media exchange, especially television drama, will be promoted in a way that blends the upstream and downstream societies.

Hussein Atfi, secretary general of the Arab Water Council and former minister of irrigation, told Al-Monitor: “The delegation project adopted by the council is very different from the activity of the Egyptian diplomatic public delegation, which conducted several tours in the Nile Basin countries after the Jan. 25 Revolution. This project entails direct contact among the people through folklore parties and plastic art exhibitions, rather than meetings with governmental officials. It is a public movement that is not unilaterally held by Egyptians toward the Nile Basin countries. Instead, it is a common spot where politicians, people, artists and cultured figures from all Nile countries will gather. A camp will be set up once in every country to constitute a gathering for the whole Nile area.”

Atfi added that all issues related to organization and funding of the delegations were discussed, and they are set to take off from Egypt. Then, groups from the remaining Nile countries will join them to tour Sudan, South Sudan and Ethiopia, to begin with, then a delegation will be sent twice or thrice every year to include all Nile countries.

Engineer Ahmad Bahaa, president of the Nile Water Sector and manager of the technical cooperation file between Egypt and the Nile Basin countries, confirmed during the negotiation meetings over the Renaissance Dam that the Egyptian government has welcomed the initiative. He noted that Cairo asserted it is convinced of the importance of the public and non-governmental efforts in widening the door to dialogue and cooperation among the Nile Basin countries.

Bahaa told Al-Monitor: “The role of these delegations is definitely supportive and vital and backs the political and technical roles. However, as people of the government, we hope that this role will offer guidance and awareness and will issue a well-studied and consensual message.”

The Egyptians are keeping up their attempts to overcome the crisis threatening their water share in the Nile. This has become their worst fear under the persisting political conflict at the governmental level. The Ethiopian Renaissance Dam has become the biggest concern for Egyptians since it threatens their water share in the Nile, especially since Sudan blessed its inauguration of the dam.