The recent Israeli shelling of the Gaza Strip, which led to the death of a 3-year-old girl, has renewed residents’ fears of another military confrontation. 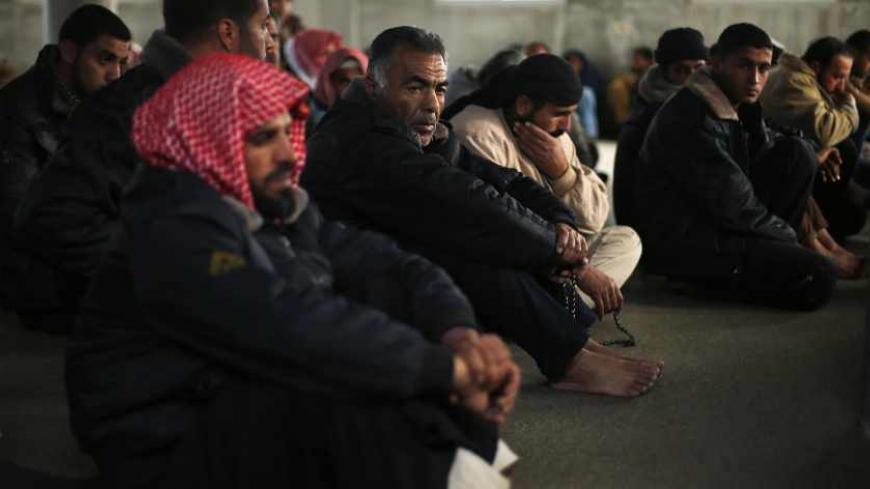 Mourners react at a mosque during the funeral of a 3-year-old Palestinian girl, who medics said was killed by shrapnel from an Israeli strike, in the central Gaza Strip, Dec. 25, 2013. - REUTERS/Suhaib Salem

AL-MAGHAZI, Gaza Strip — For inhabitants of the Gaza Strip, the death of 3-year-old Hala Abu Sbeikha in the Israeli bombardment of her home Dec. 24 brought back memories of two wars that were waged during the same period of 2008 and 2012. November and December no longer stir war memories alone, for they also come bearing news about the killing of children and other events that keep recurring with the regularity of the sound of Israeli shelling.

Hala’s blue plastic swing lay untouched in the rubble of the house, located less than 300 meters (1,000 feet) from the Green Line on the eastern border of the Gaza Strip. Shells from Israeli tanks had completely destroyed two of the house's walls.

Her uncle’s wife, Sabah Abu Sbeikha, told Al-Monitor, “We recently bought her that swing. She barely had time to use and enjoy it!”

The shells struck two stories of the house situated in the Makboula neighborhood of Al-Maghazi, in central Gaza, leaving considerable damage, a dead child and four other casualties.

Mohammad Abu Sbeikha, 6, sat near the house, his face pale, a bandage covering his left leg. Sabah, his relative, pointed to him and explained that he is Hala’s cousin, and that he was struck by shrapnel.

“They were on the ground floor of the house. His mother and two brothers remain in moderate condition at the Al-Aqsa Martyrs Hospital,” Sabah noted.

Children and relatives gathered, each of them recounting part of the story. Rahma Abu Sbeikha said as she pointed to a green area behind the demolished wall, “This is the Israeli border, where the tank that fired at our homes took position.”

She told Al-Monitor: “Even during the war, this never occurred. Normally, the Israeli army warned us through loudspeakers. But this time around, the shelling came suddenly and without warning.”

The artillery shelling began hours after an Israeli was killed by Palestinian sniper fire near the eastern border of the Gaza Strip.

In the garden where Hala was playing next to a small fountain adjacent to the house, her seven-year-old cousin Bara’a pointed to bloodstained rocks and pieces of dried bread, and said, “This is Hala’s blood, and the remnants of a sandwich that she was eating.”

According to the Palestinian Center for Human Rights, the Israeli occupation forces’ war against the Gaza Strip in November 2012 led to the death of 35 children and injured 274 other youngsters; while 318 children died in the 2008-09 war.

Hala’s mother, Buthaina al-Nabahin, leaned against the wall of a nearby house surrounded by women offering their condolences. Her eyes swollen with tears, she told Al-Monitor, “I was with Hala outside the house. When they shelled it, I ran inside to check on my infant girl Minna, my other daughter Shahed and my son Emir, and get them out of the house. It never occurred to me that Hala, who was playing outside, was in danger. When I saw her wounded, I carried her in my arms and felt the blood oozing from the back of her head. She looked at me, then closed her eyes. At that moment, in my heart, I knew that she was gone.”

“I can’t sleep," she said. "I see Hala every time I close my eyes. I wish I had run to her before her sisters; she might still be alive. But I had to check on all four of my children.”

Hala’s grandmother, Halima Abu Sbeikha, recounted to Al-Monitor how they called for an ambulance. But it was late in arriving because they live in a far-off border area. So one of her sons took Hala by motorcycle to the Al-Aqsa Martyrs Hospital.

“My granddaughter Hala was affectionate and used to listen to me. During the cold, rainy storm, she ran behind us when we lit a fire to get warm. Two days ago, she told us to prepare a wedding ceremony for her because she wanted to be a bride. She’s now a bride in heaven.”

Dozens of women clad in black who came to offer their condolences stood looking in front of the house, as Gaza’s Prime Minister Ismail Haniyeh inspected the damage. One of them dodged the men surrounding Haniyeh to approach him and say, “We live in a dangerous place and have put up with two wars. But things have gone beyond our capacity to fear and endure, after the loss of our daughter Hala.” Haniyeh tried to reassure her, expressing concern for the region’s inhabitants. He stated to Al-Monitor’s correspondent that damage to the house was great, and that women and children are always on the front lines. But the resolve and determination of the people will never be exhausted.

“This escalation on the part of the occupation forces has become customary. Perhaps this crime, and the killing of children, will reawaken the attention of our Arab brothers to the plight of Gaza and the Aqsa, which both are in danger, so that they may reassume their responsibilities toward them,” he added.

After the Israeli bombardment of security installations and agricultural lands Dec. 24 and Dec. 26, leading to the death of one child and the wounding of six others; Gazans held their breath in anticipation of a new round of escalating violence. Streets were emptied of passersby, and war returned to haunt every person’s thoughts.

Political writer Saleh al-Naami wrote in his Dec. 27 article for the Hama-affiliated Al-Resalah, “We might argue that the Zionist escalation is over, if the Palestinian resistance movement refrains from forcefully responding.” He also said that he considered further escalation, requiring it to launch a campaign, was not in Israel’s interest.

“[Israeli Prime Minister Benjamin] Netanyahu fears that escalation might snowball into a widescale military campaign. For this is the last thing he wishes to see happening, as his eyes are turned toward Geneva, where world powers will meet with Iran to hammer out a definitive agreement,” Naami added.

He also stressed that occupation forces realize that the Gaza Strip constitutes a threat to the security of Israelis. Yet, decision makers there are also cognizant of the need not to embark on any escalatory moves that could sink them in a Gazan quagmire.

Hala's home is no longer habitable. But it still carries a lot of memories for her eldest sister Shahed, 7, who said, “This is where I used to play with Hala. I miss her a lot, and think of her the most after bidding her farewell as she lay covered in her white funeral shroud.”