Turkey reconsiders its relations with Russia, testing a more pragmatic approach to the region. 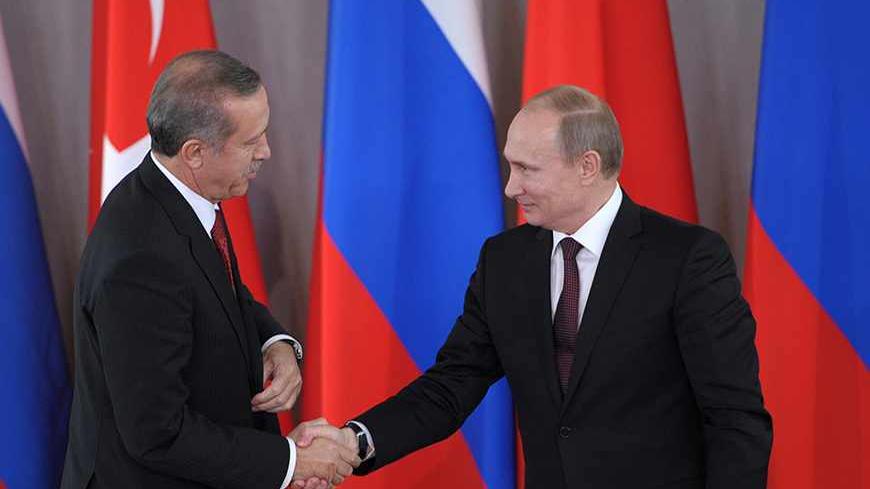 Turkey and Russia have had their political differences in the past. This has been most apparent over Syria where the two countries have backed opposing factions in the country’s civil war. Ankara and Moscow have even gone so far as to accuse each other — albeit diplomatically — of prolonging the suffering in Syria.

As indicated in this column in December 2012, however, the already vast and still growing economic cooperation between the two countries — valued at tens of billions of dollars and involving strategic fields like nuclear energy — has ensured that they keep their ties in a positive mode, regardless of political differences.

This was apparent again during Prime Minister Recep Tayyip Erdogan’s visit to St. Petersburg on Nov. 21-22 where he held talks with President Vladimir Putin on Syria and Iran, as well as a host of other issues of mutual interest.

On the economic side, the two countries vowed to increase bilateral trade to $100 billion by 2020. The figure reached $35 billion in 2012. The two countries are also finalizing a $20 billion investment by Russia for building Turkey’s first nuclear power plant.

Meanwhile, dozens of Turkish contractors are doing business in Russia valued at billions of dollars, while millions of Russian tourists visit Turkey each year. Despite overambitious targets, and the economic vagaries that influence yearly trade figures, the economic side of the Turkish-Russian relationship appears set to continue developing, and neither side seems willing to endanger this.

On the political side, however, Erdogan’s visit took place at a moment when events in the Middle East are developing rapidly, providing more scope for cooperation and coordination between Ankara and Moscow on regional issues than at previous times.

Turkey’s input in the Middle East, where it has been isolated due to a series of political mistakes by the Erdogan government, appears negligible currently. The latest development risking further isolation for Turkey is Cairo’s decision to downgrade diplomatic ties with Ankara, after it was angered over remarks by Erdogan in support of ousted President Mohammed Morsi.

This falling out between Turkey and Egypt comes at a time when Russia is reaching out to Egypt. Moscow sent Foreign Minister Sergey Lavrov to Cairo recently where he was courting the new military installed government. Unlike Turkey, Russia is currently an influential and proactive player in the Middle East and is seen to be succeeding in its efforts.

This was vividly demonstrated by the deal arrived at with Iran over its nuclear program. Moscow’s input in these talks is said to have been crucial. Russia has also been a central player in efforts to end the Syrian war, and is working today to convene at the Geneva II conference.

The novelty in all this lies in the fact that Russia is working with the US now, after the two major powers, who are also key members of the Security Council, appear to have agreed on how the main crises in the Middle East should be resolved.

Many analysts also argue that Moscow saved Washington by proposing a deal for Syria’s chemical weapons, thus freeing the US from the burden of having to bomb Assad’s forces and getting embroiled in a new Middle Eastern adventure against the wishes of the American public. All of this also elevates Moscow’s status in Turkish eyes.

Looked at from the Russian perspective, Moscow has remained constant in terms of its position on Iran and Syria. Many Russian analysts point out today that it is others that have come around to accepting what Russia has been exhorting all along. This certainly is the case with Turkey, which now accepts, although still somewhat grudgingly, that a negotiated settlement is the only option left for Syria.

Ankara initially rejected this because of the legitimacy it would bestow on Syrian President Bashar al-Assad and his regime and pushed instead for the Syrian opposition to be supported military so it could prevail against Assad. Erdogan also made his dissatisfaction over the Russian-brokered deal for Syria’s chemical weapons apparent, arguing this was letting Assad off the hook.

Turkey still differs with Russia on who is responsible for the bloody events in Syria.

This was discernible during the press conference in St. Petersburg, where Erdogan unleashed his usual tirade against the Assad regime. Moscow for its part continues to blame radical elements fighting the regime.

Despite their differences on this issue, Erdogan has been forced by the sheer weight of circumstance into supporting the Geneva II conference that Washington and Moscow are pushing for and which has now been set for Jan. 22.

“When it comes to the subject of Geneva II, we have supported this from the beginning. I must say, however, that regrettably the first conference did not produce a result. We still support this and hope results will be obtained because there is no time to lose,” Erdogan said during his news conference with Putin.

Putin said Russia had fulfilled its duty by convincing the Assad regime to go to Geneva, and indicated, in remarks obviously aimed at Erdogan, that it was now the responsibility of others to convince the reluctant Syrian opposition to go to Geneva and work for a negotiated settlement.

Erdogan also made it clear in St. Petersburg that Ankara still wants Russia to use its influence so that Turkey can be admitted into the Shanghai Cooperation Organization (SCO). This was taken as a sign that he is still looking for an alternative to Turkey’s largely dormant ties with the European Union.

Erdogan revealed earlier this year that he had told Putin that if Turkey were admitted into the SCO, it would be prepared to dump its EU bid. His remarks were initially taken as a joke, but later remarks by Erdogan showed that he was not exactly joking.

Erdogan intimated as much once again in St. Petersburg, where he suggested that SCO membership would take the EU burden off Turkey’s back. “Fifty years of experience (with the EU) is not easy. Allow us into the Shanghai Cooperation Organization and save us from this trouble,” Erdogan was quoted as telling Putin.

Entering into such an alliance with Ankara appears, however, to be a step too far for Moscow and the other members of the grouping who have only granted Turkey the status of “dialogue partner.” Many analysts say Erdogan’s request makes little sense because of Turkey’s NATO membership.

Turkey was not invited to the SCO’s summit in Bishkek in September despite being a “dialogue partner.” Iran, on the other hand, which has “observer” status in the SCO, putting it ahead of Turkey, was invited. Iran’s ties with Russia appear as strong as ever.

Iranian President Hassan Rouhani received Dmitry Rogozin, the deputy Russian prime minister for defense and space industry on Nov. 23, in a sign of the warm relations between Moscow and Tehran, and reiterated that the two countries “have shared interests and objectives in the sensitive Middle East region.”

With such diplomatic activity in Middle East gathering speed, and the prospects for new international cooperation over regional issue looming, Ankara can ill afford to remain out of the action.

Increasing political cooperation with Moscow, in addition to cooperation with Washington, not to mention Tehran and Baghdad, will undoubtedly boost Turkey’s prospects is this regard, helping it move into the limelight, rather than watching developments from the wings. The revision taking place in Ankara’s foreign policy — the crisis with Egypt notwithstanding — appears to be aiming at this.