The Turkish government may launch an investigation into the destruction of Kurdish villages by state military forces in southeastern Turkey in the 1990s. 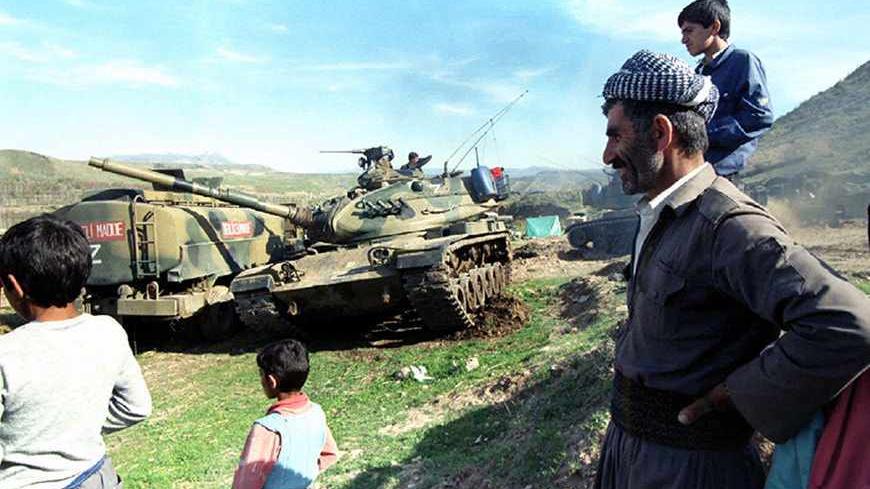 An Iraqi Kurdish peshmarga (fighter) and a group of children watch Turkish tank movement near a small village in the mountains in northern Iraq, March 22, 1995. - REUTERS/Fatih Saribas

“The mission of our battalion was to set fire to villages. We burned down 30 villages during our deployment there. … After we entered the villages, our commanders allotted houses to burn to teams of two to three soldiers. We used to enter the houses, tell the people to get out. We didn’t allow them time to move their belongings out."

These were the words of a person who had done his military service in the southeast in the 1990s and recently gave a testimony to the public prosecutor of Diyarbakir.

In the '90s, more than 3,000 villages and farm settlements were emptied of their inhabitants, burned and razed. In those days, the soldiers routinely emptied villages suspected of assisting the Kurdistan Workers Party (PKK) or refusing to cooperate with the state and burned them to the ground to prevent the villagers from ever coming back.

This catastrophic practice was adopted as a method of combating terror. This inhumane practice that wiped out entire villages was one of the main reasons so many Kurds from the southeast migrated to the western provinces of the country.

The deposition quoted above marks a turning point for Turkey. For the first time, a public prosecutor is investigating these practices, which had spread all over the southeast and turned the lives of Kurds into nightmares. That the prosecutors’ sources leaked this deposition to the press shows that they intend to prosecute the soldiers involved in such crimes.

Starting in 2007, Turkey initiated legal action against coup attempts, but crimes against humanity by soldiers were not seriously investigated. Although there were thousands of executions without trials, today, only the culprits of a few dozen of them are facing justice. Until now, no one had been tried for participating in burning down Kurdish villages.

One of the paradoxes nowadays is the status of Turkey at the European Court of Human Rights (ECHR). Until today, there have been many rulings by the ECHR against the burning down of villages in the '90s.

But Turkey, which only paid compensation to villagers after such rulings, is yet to prosecute a single person responsible for these acts. After many years, the Turkish prosecutors only now find the courage to prosecute these abominable crimes.

On Nov. 12, a short time after the details of the deposition to the Diyarbakir prosecutor appeared in newspapers, the ECHR ruled on perhaps the most appalling case of village destructions and executions.

The “Benzer and Others" case was about the destruction of two southeastern villages in 1994. According to villager testimonies, state officials first asked them to join the village guards and fight against the PKK. The villagers of Kuskonar and Kocagili of Sirnak province refused. On March 26, 1994, they experienced an atrocity that none of those remaining alive will ever forget. Turkish air force planes bombed the two villages, killing 38, mostly women, children and elderly. Those who survived filled plastic bags with body parts, buried them in a mass grave and quickly left the villages. Although they sought legal recourse for years, they couldn’t generate any action and at the end, they went to the European court.

In this case, the ECHR sentenced Turkey to pay the plaintiffs 2,305,000 euros ($3,103,700) as compensation. The court also asked Turkey to find those responsible for this gruesome crime and punish them. Immediately after the ruling, Justice Minister Sadullah Ergin said there would be a new investigation into the bombing.

The initiative by the Diyarbakir prosecutor, the ruling by the European court and the statement by the justice minister indicate the wheels of justice may actually start turning for some villagers whose homes were wiped out.

It appears that Turkey is finally becoming mature enough to examine crimes against humanity committed in the past. Only in the future will we see how comprehensive these cases will be, and how many of the criminals will be brought to justice.

I want to end here with an excerpt from the deposition of the former soldier describing how routine it was to burn villages in the '90s:

"After the villagers went outside, we set fire starting from the most flammable part of the house. We were also burning barns without checking if there were animals inside them. As we were short of time, we just set fires and left. After completing burning down a village in half an hour, we would move on to the next village."