Turks and Kurds Must Prepare for 'Truth' 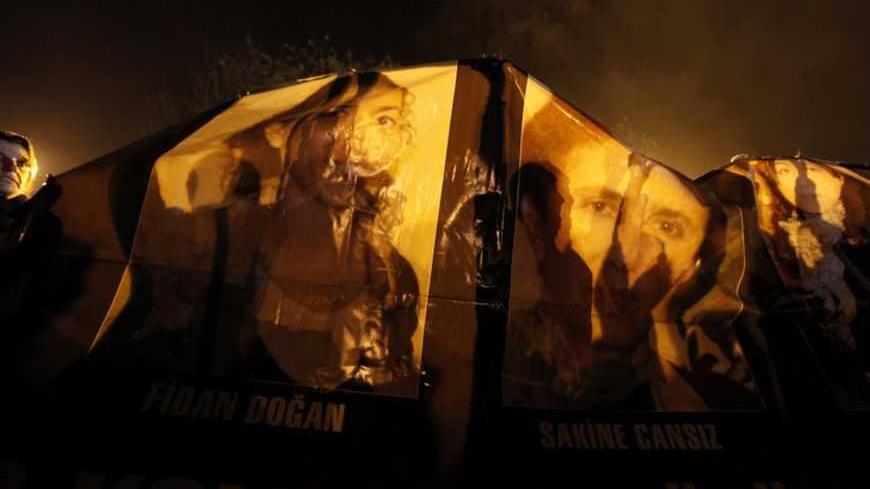 Kurdish demonstrators hold up pictures of the three Kurdish activists shot in Paris, as they wait for the ambulances carrying their bodies in Diyarbakir, the largest city in Turkey's mainly Kurdish southeast, Jan. 16, 2013. - REUTERS/Umit Bektas

As a human rights defender, I was always quite sensitive to the Kurdish question. However, I had just begun to understand how tragic and and profound it was, when I started to work for the Kurdish Human Rights Project (KHRP) in London between 1997 and 1998. KHRP back then was taking cases before the European Court of Human Rights (ECHR) on behalf of Kurdish victims.

In those years, it became almost a routine for the ECHR to hold fact-finding hearings in Turkey to hear Kurdish victims and Turkish officials, who had almost always denied any wrongdoing on their part. Turkey was found guilty in almost all these cases of village destruction, torture and extrajudicial actions brought by the Kurds against Turkey. I attended so many hearings held for these cases during those years. I felt deeply traumatized after attending every single hearing in which the victims were heard by the court. They were telling unbelievable horror stories. I saw victims whose legs were amputated because of the gangrene they developed after being held in a built-up area during extremely hard winter conditions.

Security forces just simply threw them into this unfinished building because all other detention facilities were full of Kurdish detainees. I heard a mother who had to witness the death of her little daughter [eviscerated by] a hand grenade thrown into their house by the security forces, who saw the terrible condition of the little girl but just left her in the isolated village which had no medical aid of any kind. (See Ahmet Özkan and other Turkey cases, in particular the minutes of the fact-finding hearing by the European Commission of Human Rights.)

What I was witnessing was a small part of the Kurdish tragedy. Total numbers of the incidents were blood-freezing: During the '90s, 3,500  Kurdish villages were destroyed by security forces; 17,000 Kurds lost their lives in extrajudicial killingsp and, thousands and thousands were severely tortured.

But all these human rights violations carried out by Turkish agents was only one side of the coin. I also started to observe the other part during the same time I was witnessing all these.

One day I saw a brochure published by PKK in London. The language of one particular article on this brochure was quite weird. It was roughly saying this: "X, who was suspected of being an element, was subjected to the practice and couldn’t withstand it and died. Later, it was understood that X was not an element, so his prestige was returned.” I decoded the message after reading it several times: X, who is suspected of being an “agent” (element), was “cross-examined under torture” (practice), and he died because he could not bear it. But they later found out that he did not work as an agent, and they decided to grant him a posthumous pardon.

During all these long years PKK executed so many of its members for similar reasons I mentioned or just simply for their defiance to any order given by their superiors. No one knows exact numbers of executed PKK members but it is estimated at least as a couple of thousand. PKK did not only executed its own members, but also killed and threatened so many Kurdish intellectuals whom it saw as rivals. PKK kidnapped many civilians, committed suicide attacks against civilians. In short, like Turkish security forces, they committed so many crimes which would easily be labeled as "crimes against humanity" if they were to be put on trial before the International Criminal Court in Hague.

After the AKP [Justice and Development Party] came to power, Turkey undoubtedly made some progress in terms of putting an end to impunity for crimes committed by the members of Turkish security forces. Today, there are so many generals behind bars in Turkey in connection with their alleged attempt to wage a military coup against the government. In today's Turkey, there is no practice of village destruction or extrajudicial killings. However, I do not know of any single member of the security forces who is or was being tried for burning down Kurdish villages in the past. There are very few cases in which some soldiers are being tried for their role in extrajudicial killings in the '90s, but the scope of these case is so narrow, if one considers how widespread and systematic these atrocities were before. When it comes to PKK, they are only boasting of themselves for being the champions of fighting for the rights of Kurds. They never mention any wrong doing on their part.

Turkey is now talking about solving the Kurdish question. Abdullah Öcalan, imprisoned leader of the PKK, had several times mentioned the need of establishing "Truth and Reconciliation Commissions" to address past atrocities in Turkey, similar to those that were functioning in South Africa after the apartheid regime collapsed. I doubt If Öcalan knows that Truth Commissions in South Africa, like the ones established in El Salvador, Guatemala, Peru and Sierra Leone had also addressed  human rights violations committed by armed opposition groups.

I strongly support the idea of establishing Truth Commissions in Turkey in order to confront this traumatic past of Turkey. I believe these Truth Commissions can serve many different purposes. Through these commissions, Turks can hear for the first time the stories of Kurds whose villages and lives destroyed by Turkish security forces. At the same time, these commissions can document human rights violations committed by the PKK. Kurds would learn how and why so many militants were killed by the PKK.

After all these bloody years, if we really are to reach a sustainable peace, we can only do that by learning about our past and our tragedies. We cannot heal our wounds by simply denying them. Only the truth can set all of us free and these truths have many different faces.

Orhan Kemal Cengiz is a Turkish lawyer, journalist and human rights activist. A former president of the Human Rights Agenda Association, a respected Turkish NGO that works on human rights issues, since 2002 he has been the lawyer of the Alliance of Turkish Protestant Churches. He writes for Today’s Zaman and Radikal.