Turkey in No Position To School Israel on Human Rights

Until it comes terms with its own violations, Turkey should not offer lessons in human rights to other countries, writes Orhan Kemal Cengiz. 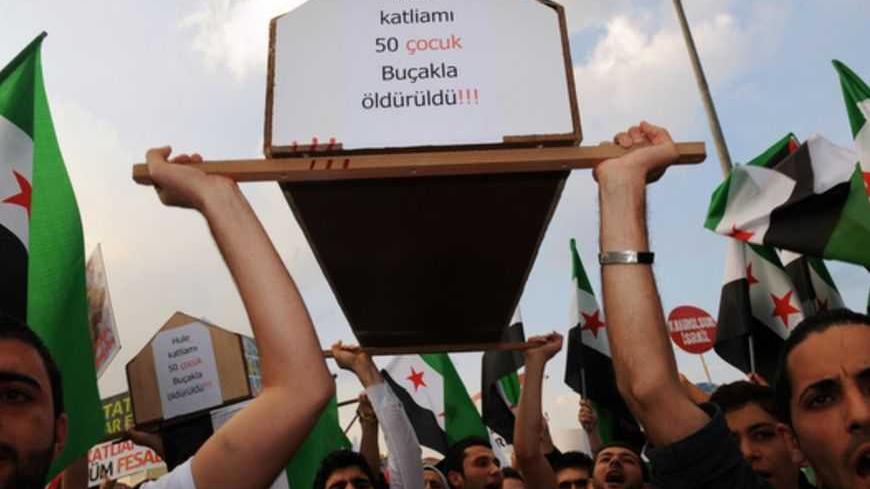 Protesters chant slogans against Israel and Syrian President Bashar al-Assad as they carry a mock coffin with the mention "In Hule, 50 children massacred by knives" during a rally on May 31, 2012 on Taksim Square in Istanbul, marking the first anniversary of the Mavi Marmara incident. - BULENT KILIC/AFP/GettyImages

Who can take Turkey seriously when it accuses Israel of crimes against humanity and then lays out a red-carpet state reception for Sudanese President Omar al-Bashir, who has an arrest warrant from the International Criminal Court?

Or let’s put it another way: Can the Turkey that couldn’t settle the accounts of its massive human rights violations against the Kurds in the past and couldn’t even apologize for what happened to the Armenians in 1915, place Israel’s crimes against humanity on the world's agenda?

Turkey’s problematic past not only impedes its efforts to call attention to Israel’s inhuman practices against the Palestinians, but also prevents it from holding violators of the rights of Turkish citizens accountable. For example, look at what transpired after the Israeli military attack on the Mavi Marmara flotilla in 2010.

Nine Turkish nationals lost their lives in the Israeli attack against the flotilla. The Israeli operation against the ship, from beginning to end, was an array of violations of international law. For an account of the terrifying actions of Israeli soldiers in that operation, one need only look at the report of the UN Human Rights Council dated Sept. 22, 2010 [A/HRC/15/21]. The UN report clearly says that contrary to Israeli allegations, nobody had fired on the Israeli soldiers. The Israeli soldiers had fired on civilians on board from close range, and even after the wounded civilians had fallen to the ground. The conclusions of the UN report clearly explain the human tragedy on Mavi Marmara that day:

“The conduct of the Israeli military and other personnel towards the flotilla passengers was not only disproportionate to the occasion but demonstrated levels of totally unnecessary and incredible violence. It betrayed an unacceptable level of brutality.”

So what did Turkey do against these "grave human rights violations” that killed nine of the citizens? It launched a born-dead legal case at Istanbul's High Criminal Court. The Istanbul public prosecutor asks for nine life sentences for the then-Israeli chief of staff, commanders of its navy and air force and the head of military intelligence for their responsibility in the deaths. In Turkish jurisprudence, it is not possible to try and sentence defendants in absentia. That means that unless these former Israeli officials agree to come to Turkey for trial by a high criminal court, they can’t be penalized.

Istanbul’s 7th High Criminal Court held four sessions starting in November 2012 and heard depositions of hundreds of plaintiffs. The court is likely to hear even more plaintiffs in its next sessions, but since it cannot hear the depositions by defendants, it will at some point decide to suspend the trial. If the defendants ever come to Turkey, they will risk detention to compel appearance before the court. The court can also call on Interpol for the arrest of the defendants, should they show up in any European country, to bring them before the Turkish court. However, no such request has been sent to Interpol at the moment.

If Turkey had been a country unworried about accounting for its own human rights violations, what choice did it have in the Mavi Marmara case? For example, if Turkey had been a party to the International Criminal Court, it could have asked for the Israeli soldiers to be tried there, as the operation was carried out on board a Turkish ship. The prosecutor in Istanbul said the Mavi Marmara, although Comoros-flagged, was registered in Turkey. The Israeli attack would be considered to have been committed on Turkish soil. Turkey then would be able to claim that this attack, along with the blockade against Gaza, was a war crime. And as there were crimes against humanity committed against those on board, the ICC would be qualified to try the case.

Why doesn’t Turkey become a signatory to the ICC, long demanded by the EU it hopes to join one day? Turkey is afraid of its past human rights violations being brought to the court one way or the other. Some of these fears pertain to the Kurdish issue and others to the Cyprus question. Turkey is afraid of being accused of ongoing violations arising from the inability of Kurdish villagers to return to the villages which were set ablaze in 1990s. Turkey also fears its 1974 military intervention in Cyprus could be classified as aggression as per the Rome Statute. Although the ICC had declared its intention to investigate crimes of aggression only after 2017, Turkey is not sure of settling the Cyprus issue until then, and still fears of being accused. Turkey, although a candidate for EU membership, is the only country among all EU members and membership candidates that doesn’t does recognize the ICC’s jurisdiction.

A country that cannot effectively cope with its own human rights and other issues in its past cannot give lessons in human rights to another country. Sadly, Turkey is so fearful of its own past that it cannot leave the corner it has backed itself into, not even to prosecute crimes against humanity committed against its own citizens. Instead, it must be content with filing legal complaints that will not produce any meaningful outcomes and serve only to appease its own public.

Orhan Kemal Cengiz is a Turkish lawyer, journalist and human rights activist. A former president of the Human Rights Agenda Association, a respected Turkish NGO that works on human rights issues, he has been the lawyer of the Alliance of Turkish Protestant Churches since 2002. He writes for Today’s Zaman and Radikal.