Turkish Foreign Minister Ahmet Davutoglu has visited the holy Shiite cities of Najaf and Karbala, as Ankara shifts its approach toward Iraqi Shiites. 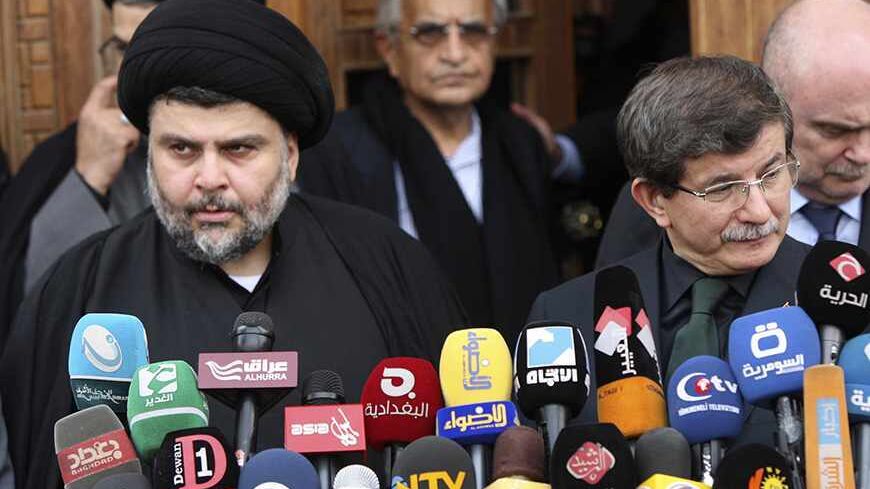 For the first time in modern Turkish history, a high-ranking Turkish official, Foreign Minister Ahmet Davutoglu, visited the Shiite holy cities of Najaf and Karbala, in Iraq. In a symbolic gesture during the holy month of Muharram, Davutoglu wore a black shirt, green scarf and tie — signs of mourning for Imam Hussein, the third Shiite imam whose martyrdom was being celebrated during his visit. He arrived in Najaf on the morning of Nov. 11, after spending time in Baghdad on Nov. 10.

While in Najaf, Davutoglu met for almost an hour with Grand Ayatollah Ali al-Sistani. He described Sistani as the “safety valve” of Iraq, calling him a “global peace man” who stands against sectarian sedition in Iraq and the region. He also said that he brought the salutations of the 76 million people of Turkey to Sistani and Iraqis. Referencing the Muharram commemoration of Hussein, Davutoglu asserted that Najaf and Karbala were in the hearts of all Turkish Muslims and that the principles of mankind's compassion espoused by the imam belong not only to all Muslims, but to all humanity. He also expressed his hope that such a tragedy as at Karbala, where Hussein was martyred, never be repeated. Sistani welcomed Davutoglu, thanked him for his sentiments and sent his salutations to the Turkish people and their government.

Davutoglu had previously announced that his visits to Najaf and Karbala were not for political purposes and that he would not discuss political issues with Shiite spiritual leaders. Once in Iraq, however, most of his discussions with Shiite leaders focused on political and even economic issues, in detail.

A source present at the meeting between Davutoglu and Sistani reported that after a brief general discussion about the regional sectarian crisis, for which both shared mutual understanding and agreement, Sistani turned the discussion to the pressing economic issues facing Iraq. He registered his disapproval that Turkey continues to press ahead with construction of a series of dams on the Euphrates and Tigris Rivers that is reducing water flows into Iraq. This issue has created a major problem for the Iraqi economy as well as the country's environment that must be resolved through cooperation between Iraq and Turkey, according to Sistani.

Davutoglu tried to explain Ankara's official position on the water issue, indicating that Turkey was is willing to provide a guaranteed water allocation to Iraq during times of scarcity. To Davutoglu's surprise, according to the source, Sistani rejected such an approach and expressed his desire for UN arbitration to resolve the long-standing water issue. An adviser in Sistani’s office told Al-Monitor that the grand ayatollah is looking for a sustainable solution that guarantees the two countries interests and is based on international conventions. Turkey began constructing the Ilisu Dam in 2006 as one among 22 dams for the Southeastern Anatolia Project on the Tigris River some 65 kilometers upstream from the Iraqi border. It will reduce 40% of the water flowing into Iraq.

Sistani’s demand that Turkey cease holding back water was widely welcomed by Iraq's media. Reports drew attention to the Iraqi government having remained largely silent on this issue, although it is one of the most important policy differences between the two countries. In short, Sistani did more to draw attention to the issue than has the government.

Davutoglu also had a meeting with the Shiite cleric Muqtada al-Sadr in Najaf. They discussed the regional sectarian crisis and stressed that Iraq and Turkey must work cooperatively to confront terrorist groups taking advantage of the volatile situation in Syria. Davutoglu described Iraq as representing the Middle East and thus having a crucial role to play in the region. Both men were cautious to avoid discussing the Syria issue directly, as this could have potentially led to conflict over their differing objectives there.

Before moving on to Karbala, Davutoglu visited the holy shrine of Imam Ali, the first Shiite imam, and Imam Hussein's shrine, where he briefly participated in a ceremony of mourning. The day before, while in Baghdad, Davutoglu had visited the al-Kadhimiya Mosque and met Saleh al-Haidari, head of Iraq's charitable Shiite Endowment. In addition, he talked with a few other Shiite politician-clerics, among them Ammar al-Hakim, head of the Islamic Supreme Council of Iraq. It is thought that Turkey's extending its hand to Iraqi Shiites might help lead to its playing a significant role in soothing sectarian crises in the region and garner Ankara the role of mediator, as it already has good relations with Sunni parties in Iraq.