The latest crackdown raises larger questions about the role of foreign labor in Saudi Arabia. 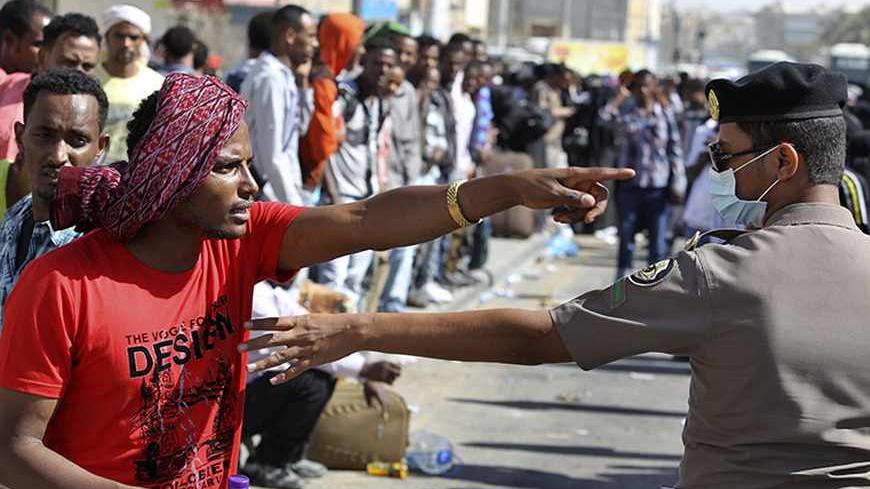 An Ethiopian worker argues with a member of the Saudi security forces as he waits with his countrymen to be repatriated in Manfouha, southern Riyadh, Nov. 11, 2013. - REUTERS/Faisal Al Nasser

There is nothing more satisfying to a disgruntled population struggling with high unemployment than raiding and rounding up illegal immigrants. Governments are compelled to appear in charge at difficult times, and a struggling society happily watches hundreds of illegal immigrants being deported. Out of the crisis, there emerges a sense of momentary quasi-nationalism that may soon evaporate amid news of clashes and death. Illegal immigrants are the "stranger" par excellence, and are always good scapegoats, an enemy within who can be blamed for all sorts of ills, from petty crime to taking jobs from locals.

The Saudi government has decided to act and round up thousands of illegal immigrants of various nationalities in Riyadh and Jeddah after giving them notice to either leave the country or sort out their visa situations. So far, the raids resulted in several deaths among both the security forces and the immigrants. Images of battles in the most deprived areas of Riyadh, where such immigrants find refuge, circulated with Saudis either participating in vigilantism and lending support to their police force or simply cheering and watching the drama unfold from a distance. One Saudi civilian went as far as boasting about his participation in "liberating" a shabby building from illegal Ethiopian immigrants. Immediately after the raids, a consensus emerged with regard to the operation to cleanse the country from the menace of those strangers who are often accused of forming gangs and engaging in petty crime, brewing alcohol for local consumption and running prostitution rings.

Of course, nobody is willing to recognize that many clandestine immigrants are employed by both Saudis and expatriates, who benefit from their unregulated and precarious status and low wage demands. Those who employ illegal immigrants are often denied the right to import labor themselves or cannot afford the cumbersome and expensive process, which remains the prerogative of the wealthy and well connected. This situation has created a local market where cheap labor can be recruited from among those who have fallen on the wrong side of immigration rules and regulations, thus finding themselves in an underground world.

The story is familiar and has been symptomatic of a combination of economic, political and social factors. The Saudi economy and prosperity remain dependent on foreign labor, both the regulated and the unregulated. One third of the Saudi population, around eight million, are expatriates who work in both skilled and unskilled professions. Before the discovery of oil, Saudi Arabia was a country of emigration. Many Saudis sought their fortunes abroad as laborers or traders. They established trade networks across the region from Egypt to India. Some of them even worked on digging up the Suez Canal in the 19th century, while traders from central Arabia established merchant houses and sought profit in Bombay.

This changed with the discovery of oil in the 1930s, when Saudi Arabia began to receive immigrants first from the Arab world and later from Asia and Africa. The situation continues until the present day despite Saudization programs announced in the 1970s in the context of multiple five-year development plans aiming to gradually reduce dependence on foreign workers. Decreasing dependence on foreign labor has not happened yet. In fact, the number of expatriates continues to rise as the oil and services economies began to expand. Equally, in the shadow of this legal foreign labor, the need for even cheaper workers grew, hence the estimated one million clandestine illegal immigrants, who are now being rounded up and deported. The Saudi economy cannot function and continue to prosper without this cheap labor that is now contested, criminalized and subjected to harsh measures.

Most importantly, Saudi Arabia continues to rely on foreign labor for political reasons. Since the 1950s, when labor strikes in the oil fields made the government aware of the dangers of an organized indigenous labor force concentrated in one vital sector, it opted for a policy of imported labor subject to strict rules and banned trade unions and strikes by workers. A foreign laborer, possibly from a docile Asian country on a short-term work permit who could be easily deported seemed ideal. The labor policy created a cherished distinction between the local citizen and the precarious foreigner, who is imported to work in a specific job and denied the right to keep his passport or change jobs. He remains under the mercy of his sponsor, who acts on behalf of the government to control the movement and rights of his laborer. This situation gave citizens privileges and allowed them to feel better about their status, now they could control the lives of those less fortunate than themselves.

The government’s labor policy created the conditions for discrimination against and abuse of insecure immigrants and at the same time, gave citizens more rights than the imported laborers. A hierarchical caste system emerged whereby regardless of how impoverished and marginalized a citizen may be, he still feels better than those foreigners who come from poor Asian and African countries. There is always going to be someone else less privileged than a Saudi, with foreign workers — or even worse, illegal ones — around. The political implications of such a hierarchy are extremely important to pacify a local population made to believe that it is the "chosen" one. Deprived Saudi men and women can feel better about themselves as there is always someone at the bottom of the hierarchy who is more marginalized and with a more precarious existence.

Foreign labor has become important for fostering a stratified nationalism, thus creating conditions for racism, abuse and harassment. The government can rally those dissatisfied Saudis against foreigners who are accused of depriving them of full employment and taking away their wealth. The Saudi press continues to publicize figures about huge immigrant remittances, sent abroad to support families who are denied the right to join their breadwinners in Saudi Arabia, while forgetting the vast billions that are often sent abroad by Saudis in search of secure investment. So immigrants do not only take their jobs, but also wealth. The foreign immigrant has become truly that despised "other" against which Saudi nationalism can be consolidated.

Socially, foreign immigrants can also be blamed for all sorts of ills, including organized crime, drugs, prostitution and other intrigues. Saudi society continues to entertain the illusion that it is pious, conservative and God-abiding and can only be corrupted by foreigners. Many Saudis continue to wage war on Westernization and modernity, blaming both on the presence of foreign elements, the media and globalization. The foreign worker is the embodiment of this outside invasion.

Many forget that consumers of these corrupting influences are none other than the Saudis themselves. The reason why clandestine alcohol brewing is such a thriving business and prostitution is rife is because Saudis are customers who are willing to pay a high price for the forbidden goods. Foreigners cater to a thriving local market with a high purchasing power. Raiding a brothel owned by a local or breaking into an alcohol warehouse makes news, especially if the workers are foreign. The customers are often easily forgotten as citizens who are lured into sin while the foreigner is either imprisoned or deported to eradicate the source of corruption. Society can rest assured that the government, through its many morality police forces and security agencies, is constantly guarding the morality of the nation and cleansing it of undesirable and immoral external agents.

There are certainly ways of nourishing Saudi nationalism other than occasionally rounding up illegal immigrants, who, it seems, are willing to retaliate and turn Saudi streets into battlegrounds. The spectacle of violence against impoverished clandestine workers is counterproductive, as it may escalate beyond control. The government has the responsibility to regulate the presence of such illegal immigrants in ways that do not threaten lives and abide by international labor treaties. Given that those immigrants perform important jobs in the Saudi economy, it is better for the Saudi government to work with their embassies to regulate their presence and turn them into a legal labor force without which many economic sectors will suffer.