Netanyahu could lose his Iran card

If Tehran and the world powers enter into a long-term diplomatic process that slows down Iran’s nuclear program, Israel’s Prime Minister Benjamin Netanyahu will be left without the one major issue that topped his agenda for the past few years. 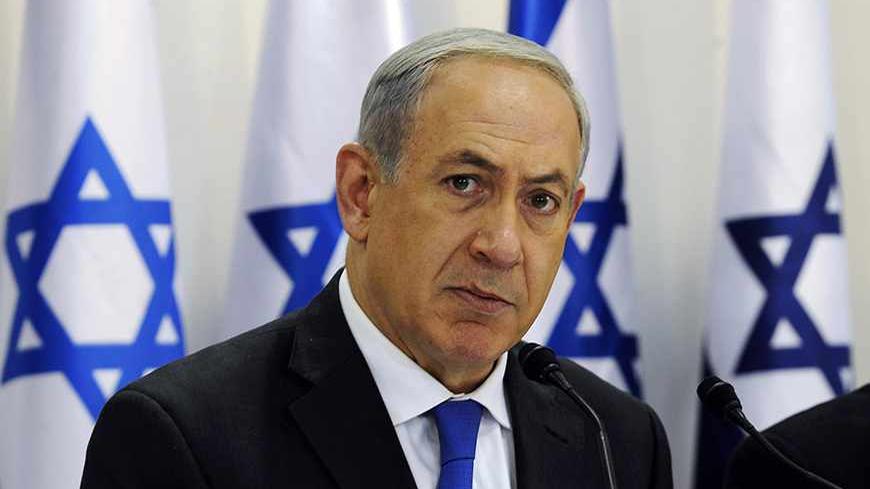 When Israeli Prime Minister Benjamin Netanyahu declared in Jerusalem on Nov. 10 that the option of a military strike against Iran must remain on the table, he sounded more like he was someone making a wish than someone who believes that what he says will have any real impact on the situation. The latest round of talks between the Western powers and Tehran came to an end in Geneva, followed by an open crisis in US-Israel relations, which included an exchange of accusations between Netanyahu and US Secretary of State John Kerry. But just one day after the talks, it is clear that while an agreement has not been signed, the military option is being jostled off the agenda. There is almost no one in the world — and in Israel for that matter — who believes that the Israeli Defense Forces will attack Iran’s nuclear facilities without US backing, and as was well-verified last weekend, such backing will not be given in the foreseeable future.

Over the past few days, Netanyahu has been using different channels to prevent any agreement that provides relief to the sanctions against Iran. In addition to the public one-upmanship between him and Kerry, Netanyahu also spoke with many global leaders. An agreement with Iran is taking shape, and it is only a matter of time before it is signed. Netanyahu therefore tried to explain to world leaders why the emerging agreement is so problematic. The Iranians are eager to reach an agreement. The Americans want to reach one, too. If the world powers enter into a long-term diplomatic process with Tehran — accompanied by either a total freeze or a significant slowdown of the Iranian nuclear program — the main item on Netanyahu’s agenda over the past few years will lose its relevancy.

Netanyahu could have chosen another tactic to use with the media. He could have described the emerging agreement as a personal success and the result of his relentless efforts to impose stringent economic sanctions on Iran. This approach finally pushed Iran into a corner and forced it to show greater flexibility. But Netanyahu has a hard time accepting the changes that have been occurring in the diplomatic arena since the Iranian elections in June. Instead, he is standing firmer than ever in his old position.

When Netanyahu was head of the opposition from 2006 to 2009, he launched what was — for all intents and purposes — a one-man international campaign to halt Iran’s nuclear program. He met frequently with foreign diplomats and lectured about the program’s inherent dangers, comparing the threat posed by Iran to the Holocaust in Europe. At the time, Ehud Olmert was prime minister, and the international community was focused on the peace process with the Palestinians. The whole Iranian affair seemed esoteric at best.

When he was elected prime minister in 2009, Netanyahu turned his fight against Iran’s nuclear program into the be-all and end-all of his political agenda. Contacts with the Palestinians halted for over three years, while Netanyahu — with the help of his Defense Minister Ehud Barak — brought the threat of an Iranian nuclear bomb to the top of the agenda. To his credit, he had quite a few successes. As prime minister he brought the international community on board by making it realize that Iran’s nuclear program poses a threat not only to Israel but to the entire free world. He was able to obtain a commitment from the United States that it would prevent the Iranians from developing an atomic bomb. Barak shuttled back and forth between Jerusalem and Washington to coordinate efforts with US Secretary of Defense Leon Panetta. It was during these years, too, that the harsh economic sanctions were imposed on Iran, strangling the country’s economy and forcing it to come to the negotiating table.

Any satisfaction Netanyahu might have enjoyed during his second term as prime minister in all matters pertaining to the Iranian nuclear program ended at almost the same time as the start of his third term in office. The change of government in Iran, the new regime’s gestures to the West and the emergence of Russian President Vladimir Putin as a power player in the international arena all dramatically changed the situation. Late last week, the process reached its climax. Netanyahu was once a key figure spearheading the international community’s attitude toward Iran, but now he found himself almost completely isolated. Apart from the French delegates to the talks — who have maintained a hawkish approach toward Iran — the international community hardly paid any attention to Netanyahu's arguments. His urgent and tense meeting with Kerry on Nov. 8 — just before Kerry flew to Geneva — and the angry statement that he delivered afterward will not be remembered as one of his glorious moments.

There is some validity to Netanyahu’s position. Iranian smiles and their positive statements seem to distract the world's attention and have yet to be supported with deeds. The emerging agreement between Iran and the West is indeed problematic, and as the person responsible for Israel’s security interests, it is Netanyahu’s obligation to intervene and raise the alarm. However, instead of appearing oblivious to the latest events in Geneva, Netanyahu would be better off if he gave diplomacy a chance — at least publicly — and if he focused his efforts on improving the agreement. That way, he could have a real impact on the negotiations and be perceived in a more positive light. But when he and other officials in Jerusalem hint repeatedly that Israel has the capacity to take action against Iran to defend itself, they sound as if they are completely unaware of what is taking place in the international arena. They sound as if they are making idle threats without any basis in reality.