In a move that seemed coordinated with the White House, Israeli Prime Minister Benjamin Netanyahu revived the Iranian nuclear threat in Israel and around the world, pushing the Palestinian issue off the international agenda. 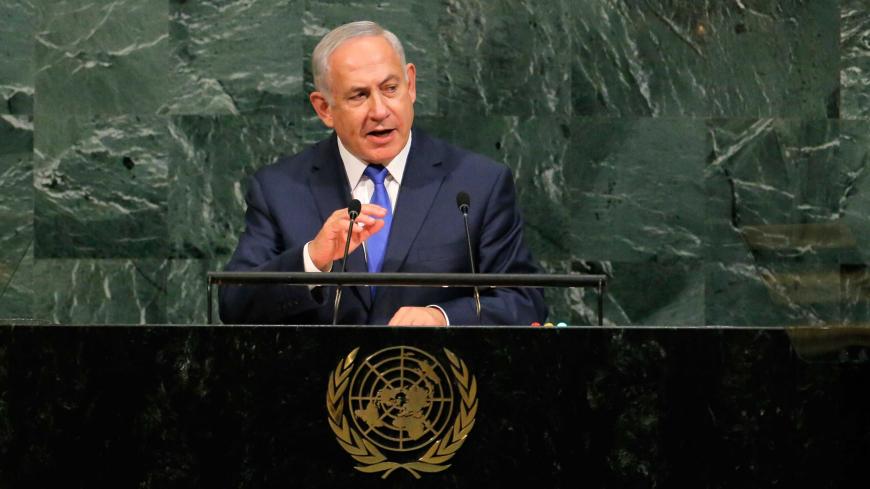 Prime Minister Benjamin Netanyahu devoted the bulk of his 2015 speech at the UN General Assembly meeting in New York to warning of the risks inherent in the nuclear agreement signed three months earlier between Iran and six world powers.

The speech was firm, its messages sharp. Netanyahu was eloquent as always, but his threats surrounding the nuclear agreement with Iran sounded more than a little anachronistic. After all, that train had already left the station. Besides, US President Barack Obama wasn't very concerned about what the Israeli prime minister thought about the agreement, having such a tense relationship with him. At the end of his speech, Netanyahu attacked Palestinian President Mahmoud Abbas as well, but then announced that he was prepared to renew negotiations with the Palestinians.

Two years later, on Sept. 19, Netanyahu was back at the same podium. Most of his speech was devoted to how Israel is thriving economically, politically and scientifically under his leadership. In keeping with his longstanding tradition, he veered off to the threat posed by the nuclear agreement with Iran. Netanyahu said that the signatories should either "fix it or nix it," adding, "Today, I have a simple message for Ayatollah [Ali] Khamenei, the dictator of Iran: The light of Israel will never be extinguished. Those who threaten us with annihilation put themselves in mortal peril. Israel will defend itself with the full force of our arms and the full power of our convictions."

Unlike in 2015, this time Netanyahu's remarks sounded more relevant. He delivered his speech to the General Assembly just a few hours after President Donald Trump's own bellicose address, in which he renounced the agreement with Iran, a major component of Obama's legacy. Trump sounded like he was reading Netanyahu's talking points when he described the nuclear agreement as "one of the worst and most one-sided transactions the United States has ever entered into." He then threatened to withdraw from the agreement and sent a serious warning to North Korea as well. He made no mention of his commitment to renewing negotiations between Israel and the Palestinians — or the Palestinian issue at all, for that matter.

In his speech, Netanyahu ignored the Palestinian issue almost entirely, uncharacteristically making no effort to attack Abbas for failing to prevent incitement in the Palestinian Authority.

As far as the prime minister is concerned, his address to the UN was a huge success. Negotiations with the Palestinians have dropped off the agenda, while the Iranian threat to Israel has returned to take their place. It was the conclusion of a well-coordinated effort with the White House that began a day earlier during the meeting between Netanyahu and Trump. Much like their speeches to the General Assembly, the statements they issued after their meeting focused on Iran. Netanyahu found Trump to be the perfect partner. He can pat himself on the back for his success in recruiting his American colleague for the struggle against the nuclear agreement.

Netanyahu paid Trump back by showering him with compliments. "I’ve listened to countless speeches in this hall, but I can say this: None were bolder, none more courageous and forthright than the one delivered by President Trump today. President Trump rightly called the nuclear deal with Iran, he called it an embarrassment. Well, I couldn’t agree with him more. And here’s why: Iran vows to destroy my country every day. … Iran is conducting a campaign of conquest across the Middle East and Iran is developing ballistic missiles to threaten the entire world."

Netanyahu will remember the UN General Assembly meeting of 2017 as the opening salvo of a major campaign to restore the Iranian nuclear threat to the top of the agenda. In the two years since the nuclear deal was signed during the Obama administration, no one has paid much attention to the issue, whether in Israel or elsewhere. Netanyahu suddenly found himself without the item that dominated his agenda from 2009 to 2015. Netanyahu turned the Iranian threat into the be-all and end-all of his policies, pushing the Palestinian issue off the public agenda. He described the Iranian nuclear program as an existential threat to Israel and warned that Israel could attack Iran's nuclear facilities.

For Netanyahu, the 2015 deal reshuffled the deck. He had to come up with alternative agendas to maintain political relevance. His handling of the Palestinian issue was limited to occasional lip service, intended to signal to the international community that Israel was not the party rejecting negotiations.

There's another motivation for him to get the Iranian threat back to the top of the national agenda. Netanyahu arrived in New York after a successful visit to Latin America, leaving behind the criminal investigations that threaten his political future. For weeks now, Israeli headlines have featured the Netanyahu investigations on a daily basis. They are the opening story on all the news broadcasts and the news is generally bad.

It is safe to assume that Netanyahu really does see Iran's nuclear capacity as an existential threat to Israel and believes that it is his historic mission to fight it. Even if Israel is not threatened with destruction, Netanyahu has convinced large swaths of the population that it has the potential to be a second Holocaust. Netanyahu knows that the Iranian issue evokes existential fear among Israelis. Protected by this fear, his vast experience in handling security affairs and other critical national issues is a distinct advantage over other politicians. He also wants to convince the Israeli public that the charges against him, which include receiving bribes, are minor issues mere and ultimately irrelevant political persecution, considering his critical activities on behalf of Israel's security.

Netanyahu was hoping to sideline public interest, at least for a while. But even before Israel entered the Jewish New Year holiday (Sept. 20-23), headlines announced new developments in the investigations.

Still, Netanyahu managed partially to shift the agenda. The memory of his successful UN speech may dim quickly, but Netanyahu has already succeeded reinvigorating focus on the Iranian threat. He will now be able to return to it whenever he wants to divert attention.