I'm no fan of Bibi but I see a bad deal, says former Labor minister

In an interview with Al-Monitor, former Deputy Defense Minister Ephraim Sneh argues that the deal with Iran is dangerous to Israel, because it will strengthen Hezbollah and Hamas, while allowing Iran to enlarge its regional hegemony. 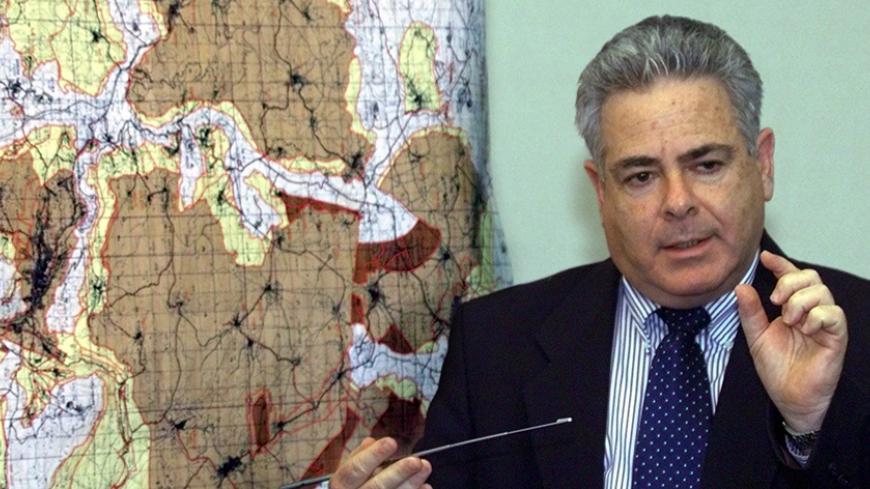 Deputy Defense Minister Ephraim Sneh sits in front of a large map of the West Bank during a news conference, March 19, 2000. - REUTERS

“The nuclear deal with Iran is bad for Israel and bad for the region. It makes me sick to say that [Prime Minister Benjamin] Netanyahu is right, but it’s true. There are plenty of holes in the agreement, and it has a negative effect on our position in the region.” Former Labor Party Minister Ephraim Sneh said that in a very pessimistic interview with Al-Monitor. Sneh has been warning about a nuclear Iran for two decades now. He began expressing his concerns long before Prime Minister Benjamin Netanyahu made that fight his life’s mission. Though he is a dove on the diplomatic front, Sneh proved to be a hawk on security matters, while serving as deputy minister of defense and a member of the Foreign Affairs and Defense Committee. In the interview he asserted, “The curse of the settlements hovers over the nuclear agreement as well,” and warned of Netanyahu’s ongoing intervention in internal US politics, which has already caused enormous damage to Israel’s foreign policy.

Al-Monitor:  In hindsight, how did Israel reach a point in which there is such an agreement, which you describe as bad?

Sneh:  Netanyahu made plenty of mistakes from the very start. The few right things that were done involved military issues, and even that was initiated under [former Prime Minister Ehud] Olmert. As far as diplomatic matters are concerned, you could say that 100% of everything Netanyahu did was mistakes. The diplomatic handling of it was a failure by the very fact that it turned the Iranian issue into a means for the Republicans to lash out at President [Barack] Obama. That is how we distanced the Democratic Party from us. If there was once a united, bipartisan front in support of Israel, encompassing both Republicans and Democrats, on this particular issue the Democrats decided to position themselves next to the president. The Israeli actions were mistaken, and have served foreign interests. Going over the head of the president of the United States serves foreign interests. It is not in the interest of the State of Israel, and it is not in the interest [of] Israel’s security.

Al-Monitor:  How is the agreement bad?

Sneh:  It is full of holes. First of all, the inspection protocols are very problematic, because they give the Iranians 24 days to prepare. That’s enough time to hide and conceal what they have been doing. After all, they are masters of deception. They’ve spent years deceiving the entire world, so they don’t need more than 24 hours to hide any accumulated evidence. In other words, the inspections aren’t real inspections.

Second, the nuclear project was not dismantled. It was put on hold. It was frozen, and anything frozen can be unfrozen. The Iranians don’t see their strategy in terms of winning the next elections. They look at it in generational and historical terms. They consider domination of the region and of the entire world for that matter as a historic objective, rather than some concrete objective in the here and now. In that sense, another 10 or 15 years is not a lot of time.

The third thing is that the clause regarding the restoration of punitive measures will become impractical in the new reality that will emerge the moment sanctions are lifted. Why? Because who will be the first people to go running to Tehran to do business there? Large corporations. Once they have contractual ties with the Revolutionary Guards or some proxy for the Revolutionary Guards, their government will not take any steps against Iran, because doing so would involve money and jobs. It would involve economic interests. That is why that whole argument is untrustworthy.

Al-Monitor:  Former Prime Minister Ehud Barak said [on July 14] that given Israel’s status as a regional military power, arguments against the agreement should be put into the proper proportions, and the use of apocalyptic terms should be toned down.

Sneh:  There is a difference between how problematic the agreement is — and it is very problematic — and the apocalyptic terminology used to describe it. There is no room for that. While there is room for deep concern, there is no room for the feeling that the end is nigh. There is, however, one way in which the analogy between 1938 and 2015 does hold true. The most troubling aspect of the American position is that they see Iran as an equal and even a senior partner in managing the region. This means that America is creating a balance between the Sunni forces, led by Saudi Arabia, and the Shiite forces led by Iran. They have this naive belief that they can play the two sides off each other and create a balance of power, which they can control. But that is a pipe dream, because the Americans lack the level of astuteness in Middle East affairs to do that.

They say that the agreement with Iran will be Obama’s legacy. I say that if it really is his legacy, he will be in a situation where he needs to defend it. In other words, he will not do anything that will bring him into conflict with Iran. In fact, that has already happened. If we look back and analyze US policy in Syria [reference to the agreement on chemical weapons], it is perfectly clear that the desire to reach a nuclear deal influenced how assertive American measure really [was] there.

Al-Monitor:  How will the agreement impact Israel’s status regionally?

Sneh:  It will have a deleterious effect on our current situation. Pro-Iranian factors in the region will have more money and will be more brazen. That is what it means. When we get into a conflict in Lebanon — and we will — Hezbollah will be stronger, better equipped and more modern, all because of Iranian money. The same is true of Hamas in Gaza. What this means is that the military situation facing Israel will be more severe. It will be more difficult for us to look after our ongoing security needs, and future rounds of fighting will be fiercer. Furthermore, it will be easier for Iran to undermine any agreement [between Israel and the Palestinians], assuming that some other Israeli government attempts to advance such an agreement.

Al-Monitor:  Maybe it was a brilliant policy move by President Obama? Take Syria, for example. Chemical weapons were dismantled there without putting any American boots on the ground.

Sneh:  What is so brilliant about what happened there? That [Syrian President Bashar al-] Assad is still in power? It is the exact same mistake that lies at the core of the nuclear agreement. The problem is the very nature of the force you leave on the field, and not the kind of weapons it has. That position holds that killing innocent Syrians with 500-kilogram barrels of explosives is legitimate, but killing them with sarin gas is forbidden. The same thing is true about the American attitude toward Iran. Ballistic missiles and tens of thousands of rockets aimed at Israel is legitimate, but enriching uranium is forbidden. That is the essential mistake.

President Obama and Secretary of State John Kerry don’t hate Israel. They consider themselves to be friends of Israel and are convinced that they did us a favor. But they have a naive belief that they can change the Iranians, and they consistently fail to have an in-depth understanding of the conflict between radical Islam and Western culture. They refuse to recognize that this is a deep-rooted cultural conflict between two civilizations with completely opposed value systems. They fail to understand that the Iranians regard nuclear weapons as a means and not as an end per se. They are a means of transforming Iran into a global power with the ability to extort the rest of the world. While the Iranians may have abandoned this goal, at least temporarily, they acquired other means that serve them in attaining this objective.

Al-Monitor:  You once wrote about how the lack of any diplomatic process between Israel and the Palestinians sways negotiations between the superpowers and Iran. How much did it influence this agreement?

Sneh:  The curse of the settlements hovers over the nuclear agreement as well. Why? Because when Obama first came to office, they didn’t reach the kind of agreement with him that I had been advocating. The idea was to tell Obama, “Let’s launch serious negotiations with the Palestinians, and you will protect us by being tough on the Iranian issue.” The idea had bipartisan support in the United States. It has a logic to it.

If Bibi [Netanyahu] seriously believed what he was saying, that Iran is Israel’s main enemy and that it poses an existential threat, he should have paid the price by reaching an agreement with the Palestinians. That would be the kind of deal made by an Israeli foreign policy that is not held prisoner by the settlements.

Al-Monitor:  What is the next step now? Should Netanyahu and the Zionist Camp form a unity government?

Sneh:  Under no circumstances whatsoever should the Zionist Camp join the coalition. As of now, Netanyahu has no way to control his party of extremists. A majority of Likud members thinks that it is more important to keep control of the West Bank than it is to defend Israel from the Iranians.

Israel should say what it has to say in Washington, but under no circumstances should it wage a campaign against Obama. So much damage has already been done. I would really like to enlist the Democrats to support our side, but unfortunately, the Israeli government's behavior until now has made that impossible. We have to build a new regional alliance and mend our relationship with the United States.

Al-Monitor:  What about the military option?

Sneh:  It is extremely important. If Israel is not in a position to launch an attack against Iran, strike at it and cause serious damage, no one will talk to us. The importance of building a defensive military response and maintaining our ability to attack is dramatic.