It's no secret that Iraq’s present situation is dire; however, the question is still pertinent regarding what we can expect for the nation’s future. 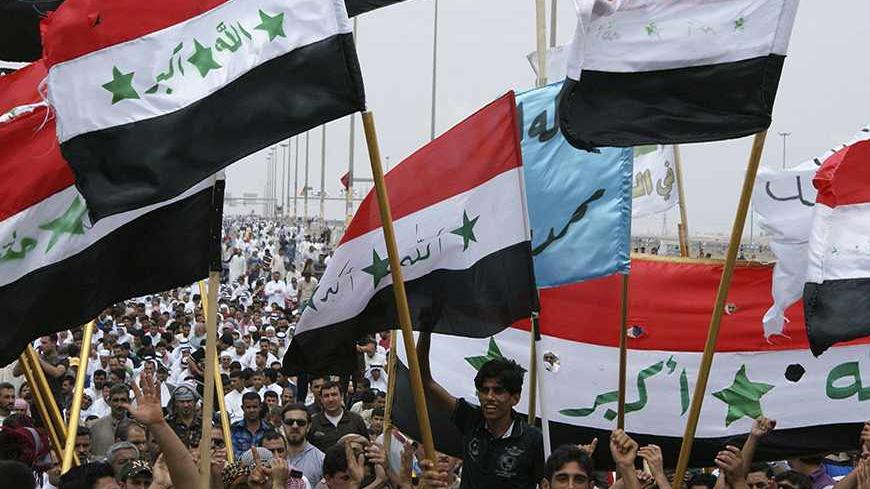 Iraqi Sunni Muslims wave the old flags of Iraq during an anti-government demonstration in Fallujah, 50 kilometers (31 miles) west of Baghdad, May 3, 2013. - REUTERS/Mohanned Faisal

How can we understand the future of Iraq? In the minds of Iraqis, Iraq's future is worse than the present. Many Iraqis perceive their coming days will be dark and grim. Intellectuals do not hesitate to acclaim the past and dwell on it, as if it were the perfect era.

This situation has psychological, historical and philosophical dimensions, and is certainly related to Iraqis having always had low expectations of the future.

The perception of the past and future is certainly linked to the present, for Iraqis have been experiencing political, economic and social crises. This justifies their reminiscence about the past, where life’s requirements were less complicated. This gloomy present does not bode well for them in the future.

This introduction is necessary to address two major points in the Iraqi status quo:

First, the Iraqi political arena is dominated by the same grim prospect that prevails among the public. Politicians are not reluctant to state that “Iraq is moving from bad to worse.”

Second, there is this emotional and political duality that confuses the perception of the past, which prevents Iraqis from rising up and advancing their country once again.

Regarding the first point, this state of popular and political frustration justifies failure economically, politically and at the administrative level. This has produced unsound governing systems and ruling regimes and led to a state of confusion at the level of the government’s administration and its inability to invest its resources. It also resulted in sharp social struggles and a serious security collapse.

This general frustration is also linked to the high expectations of Iraqis on April 9, 2003, which marked the end of the former Iraqi regime and the beginning of a new era.

Many politicians were wrong when they raised their expectations about the rapid advancement of Iraq following the entry of US troops into the country. Many intellectuals were wrong about monitoring social movements apart from the past. They believed that “everything will return as it was.”

The truth is that nothing will be back as it was.

Therefore, we are to look at the second point because it is substantial in understanding the current frustration plaguing the Iraqi arena.

“How do we deal with the past?” This is the question that has not been answered yet.

By the past, we mean the legacy or remnants of the regime of Saddam Hussein and the Baath Party. In 2003, when all parties were not sure how to deal with the remnants of the previous regime, former American civil governor Paul Bremer made his famous resolution to eliminate the remnants of Hussein’s regime by dissolving the army, security apparatuses and media institutions, and launching the “de-Baathification campaign.”

What matters today is that the Iraqis restore their ability to come to terms with the future, through a less violent and more humane settlement.

The unending accusations hurled at the the thousands of former Baathists will not be a logical solution to the problem. Ten years after the decision to “de-Baathify” and isolate previous security and military officials, the state has yet to determine who has the blood of Iraqis on their hands and who does not, for they were re-integrated in society as normal citizens.

The fundamental crisis over the past lies in that laws that were supposed to be a fair tool to overcome the transitional phase have become a big rock preventing Iraq from moving beyond this stage. This would not have been the case had these laws not been misused. In many cases, they caused injustice, rather than serving to achieve justice.

People cannot move toward the future when they are preoccupied with the past. They cannot move forward without taking bold steps based on the logic of truth and justice, rather than on political bargaining and investment.

Iraq desperately needs to come to terms with its future — to see more light at the end of the dark tunnel. But before this can happen, the country needs a bold and just resolution to settle old scores.