Iran’s crisis on the roads

Iran's traffic fatalities are still at a critical level. 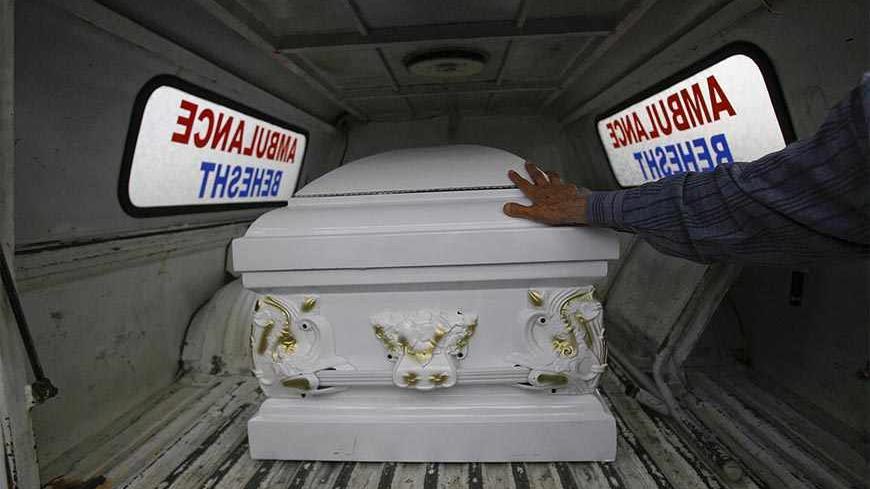 A relative of a victim of an accident prays as he puts his hand on a coffin outside the Imam Khomeini International Airport, Tehran, June 20, 2010. - REUTERS/ISNA/Hemmat Khahi

The Iranian government faces a major challenge: Traffic accidents represent a disproportionately high number of the country's fatalities. In the past, UN agencies, the World Bank and Iranian experts issued reports stating that accident rates and consequent deaths constituted a socioeconomic crisis in Iran. In 2012, the World Health Organization (WHO) stated in a report that Iran had the highest number of deaths caused by road accidents in the world.

This week, for the first time, an official Iranian entity, the Majles Research Center (MRC), published a detailed report about Iran's traffic accident fatalities. The report outlines that in the Iranian year 1390 (which ended March 20, 2012) there were 117,256 fatal accidents, leading to 20,068 deaths and 297,257 injuries. The highest number of fatalities was recorded in 2005 when 27,759 people were killed in road and traffic accidents.

Considering that, globally, road traffic accidents kill 1.2 million people, and the fact that Iran has 1% of the world population, the rate of traffic fatalities is disproportionately high in the country. Sadly, according to UNICEF, in Iran, among all unintentional fatal injuries inflicted on children under five, traffic-related fatalities are the leading cause of death.

From an economic point of view, according to the MRC report, road accidents and consequent fatalities lead to damages equaling 8% of the Iranian gross domestic product (GDP). UN reports put the figure at about 6% of the country’s GDP. In other words, damages resulting from traffic accidents amounted to a minimum of $20 billion in the Iranian year 1390.

One of the interesting findings of the MRC report is the fact that there is no meaningful relationship between the number of vehicles in the country and the traffic deaths. In fact, the number of cars in the Iranian year 1373 (which ended March 20, 1995) stood at about 1 million with the number of accidents standing at 32,505 and the number of traffic deaths at 10,545. In 1390, the car fleet had grown to more than 16 million, with accident and fatality statistics well below the growth in the number of cars. Therefore, it is valid to say that other factors contribute to this critical phenomenon in Iran. Experts agree that the following reasons are to blame for the problem:

The relative improvement in the number of traffic deaths since 2005 is a consequence of a greater effort by the country’s traffic police to implement safety laws, including a compulsory use of helmets for motorcyclists.

In recent years, UNICEF, along with Iran’s Ministry of Health, the State Welfare Organization, police, and the Municipality of Tehran have begun an awareness-raising campaign to shed more light on these facts and help reduce deadly road accidents.

Nonetheless, Iran is still facing a critical situation, and the government needs to address the causes mentioned above. Evidently, changing the Iranian culture of fatalism will be difficult, but the government can draft and implement policies that can address other issues.

The highest priority should be road design and infrastructure. Unfortunately, the previous administration was too focused on the quantitative growth of Iranian roads. However, there is a genuine need for qualitative improvement and intelligent design of roads and traffic points. The country has the knowledge and expertise to design and build quality roads — what is needed is adequate infrastructure budgets and thorough supervision of road construction projects. Diverse provinces could also possibly be allowed to develop their own strategies in road construction, as opposed to a centralized structure that implements projects from Tehran.

In line with the above effort, more and more municipalities have to be obliged to increase traffic safety features in their communities. Tehran Mayor Mohammad Bagher Ghalibaf has been at the forefront of a national effort to make investments and improve safety conditions in Tehran. These efforts are positive but too fragmented. The government needs to offer incentives to municipalities to engage in such programs more actively and consistently.

In addition, automotive industry standards have to improve. In the past few years, state institutions have been more focused on engine and fuel consumption standards to reduce fuel consumption in cars. A similar effort has to seek to improve safety standards and equipment. So far, Iranian car manufacturers have hidden behind sanctions to explain their inability to improve safety characteristics of their products. However, industrial standards need to be adjusted to new realities in the market. With the government’s effort to improve ties with Western countries, the needed technologies should also be available.

Finally, the government needs to put serious effort into  improving emergency services on all levels. Experts agree that some of these services need to be decentralized to increase efficiency in Iran’s diverse regions. There also needs to be improved management and coordination of emergency and other services at key travel times, such as during the pilgrimage to Mashad and when vacationers flock to the Caspian region.

It remains to be seen whether the Iranian government will manage to pay sufficient attention to this crisis amid all the other challenges it is facing. As the above estimates indicate, traffic fatalities are just as damaging to Iranian society and economy as rampant energy consumption or air pollution, and hence deserve  similar mitigation efforts.