Senior Hamas official Mousa Abu Marzouk has criticized Iran for signing a nuclear deal with the West, but some of his colleagues believe the deal will have a positive effect on Hamas. 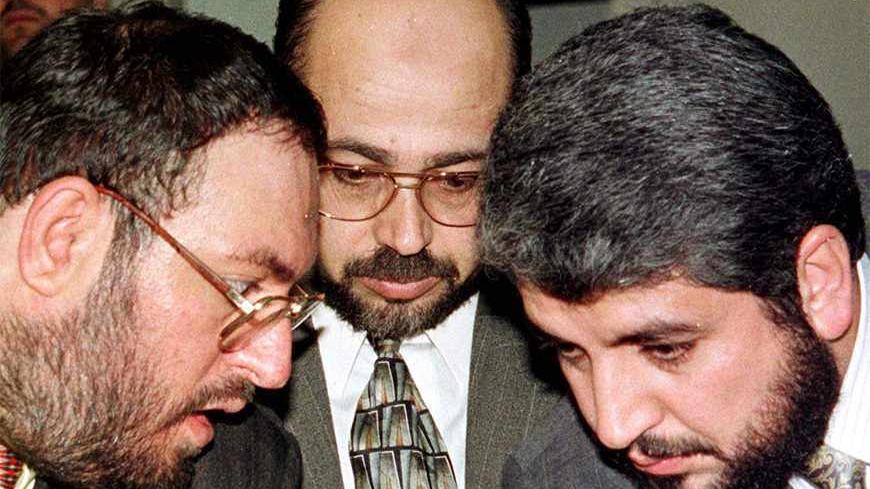 GAZA CITY, Gaza Strip — The Iranian nuclear agreement announced in Geneva on Nov. 24 has unsettled not only Israel but also Hamas.

Mousa Abu Marzouk, the deputy head of Hamas’ political bureau, wrote on his Facebook page on the evening of Nov. 23, “Talks between Iran and the P5+1 group will end with an agreement whereby Iran would promise to reduce uranium enrichment in return for the West ending its Iran sanctions, restoring ties with Iran and releasing its frozen funds.”

He added that the agreement would make “the Zionist entity safer, because now it is comfortable knowing that no Iranian nuclear threat is coming, nor are there any chemical weapons anymore. Only Israel has those now.”

Political analyst Mukhaimer Abu Saada told Al-Monitor over the phone that Abu Marzouk’s statements were another indication of the tense Iran-Hamas relationship. Hamas, he said, is exploiting the strained ties to score points against Iran by alluding that the latter made concessions to the United States.

But he said that it is difficult to judge the agreement now, saying, “Some say America won, and some say Iran won. But this is premature.”

Abu Saada added that the deal included provisions related to enrichment and releasing frozen Iranian funds. He suspected that the agreement also included undeclared items about how the United States and Iran would share influence and that Iran would stop supporting militant groups.

“The long-term impact of the agreement will appear on the resistance movements," he added. "I expect Iran to stop supporting Islamic Jihad, Hamas and Hezbollah, but not soon.”

On the other hand, some in Hamas see a positive side to the agreement.

“It was smart of Iran to resolve its problems with the world after years of being characterized as a terrorist state and of provoking the Gulf states, only for it to come back and take its place among the nations by easing the wave of hostility that is hampering it economically,” moderate Hamas figure Ahmed Youssef told Al-Monitor in an interview in his Dar al-Hikma office. He added that it was a smart move by President Hassan Rouhani to resolve the crisis with the West and to open new horizons with Europe. He added that Rouhani would not have made that move had the United States upheld the ban on dealing with the Iranian economy and oil.

“I have met with [former Iranian President] Mohammad Khatami three times. I noticed that he favored an agreement with the United States. So what’s happening now is a continuation of Khatami’s [vision],” Youssef noted. He explained that these talks come after years of both sides demonizing each other, especially after the United States sided with the Shah of Iran, which led to the conflict continuing for more than 30 years, during which Iranian leaders called the United States “the Great Satan.”

He said that what used to prevent an agreement was the power of the Israeli lobby during the administrations of former Presidents George W. Bush and Bill Clinton, “but Obama is keen not to open new fronts with the world and to resolve the areas of tension. Iran under Rouhani is a strong state that is trying to dismantle its problems with the West. This trend in Iran comes after the Iranian Revolutionary Guard gave the diplomatic option a chance.”

Youssef said that achieving this kind of relationship and staying away from the circle of hostility serves Hamas and restores Iran’s influence in international politics, adding, “Not all solutions involve rockets. Politics always tries to make diplomacy win over wars. From that, defending the Palestinian cause takes its place as the core issue.”

He asserted that Hamas doesn’t interfere in Iran’s affairs, that the deal was an Iranian decision and affects Iranian interests. “This kind of detente and disengagement with the West will be positively reflected on Hamas," he said, adding that "Iran's opening on the international level could mean Hamas' opening to the world, and a decrease in pressures on the Gaza Strip. If negotiations succeeded with Iran, why wouldn't they succeed with Hamas?"

In the same context, political writer Akram Atallah said during a meeting with Al-Monitor that the Iranian leadership played a smart game to strip Israel of its international pretext that Iran wishes it harm.

But Youssef disagrees. “We don’t expect Iran to sell us to America. Iran supports Hamas as a matter of principle and it considers Palestine and Al-Aqsa Mosque Iranian priorities. Iran cannot compromise on Palestinians’ rights.”

Islamic Jihad, a strong Islamic faction supported by Iran, agrees. On Nov. 25, Nafez Azzam, a member of the Islamic Jihad political bureau, told Palestine Today, which has ties to Islamic Jihad, of the movement’s approval of the deal, saying, “We are happy with the announcement of this agreement because it spares the region many dangers, the most important of which is America waging a war on the region.”

Azzam noted, “The agreement enhances the people's chances to achieve their will and their right to say what they want, which reflects positively on the conflict imposed on us. … We wish that peace would prevail all over the world. We are a people who don’t like bloodshed or wars. We are defending our right and our nation.” Azzam said that Israel is the only party to announce its rejection of the agreement.