The recent arrest and physical abuse of Palestinian journalists by Palestinian police has raised fears of a crackdown on freedom of press. 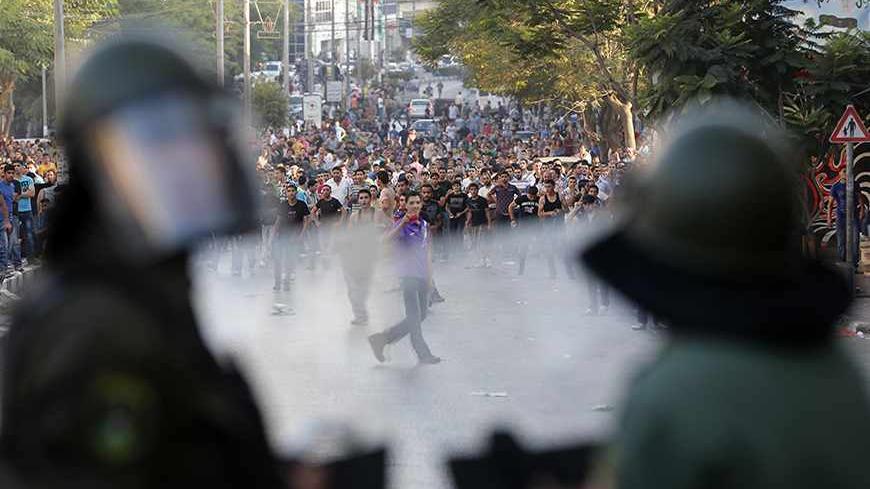 Palestinians security officers stand in front of protesters during a demonstration against high living costs and the government in the West Bank city of Hebron, Sept. 10, 2012. - REUTERS/Darren Whiteside

George Kanawati has become a well-known name in the Bethlehem area. The popularity of the director of the city’s longest-running radio station and anchor of its popular morning show is not simply from his journalistic work. Radio Bethlehem 2000’s top journalist has been embroiled in quite a few battles with various governmental agencies, the latest of which landed him in prison and gave him a black eye.

While the Israeli restriction on Palestinian movement for journalists continues without any sign of easing, the main challenge for Palestinian journalists has become more local. Palestinian officials appear to be less tolerant to criticism and seem to be acting with impunity despite strong opposition by the Palestinian Journalists Union and human rights organizations.

Kanawati’s case has been going on for some time and the tit for tat between him and various government officials is being dealt with in the courts. But the latest episode between Kanawati and the director of the Bethlehem police appears to have taken a different route.

The troubles for the radio anchor started on Nov. 7, when he commented on the director of the Bethlehem police, Alaa Shibli, awarding various citizens and public officials with an appreciation plaque. In commenting on the occasion, Kanawati scoffed at the director without mentioning his name, comparing the appreciation act to that of shining one's shoes. The statement angered the head of police who ordered his arrest. The Bethlehem police waited three days until Kanawati, who had been spending time in Ramallah, returned home that Sunday night. Ten police officers armed with a search warrant entered his home, shoved around furniture as well as his mother and violently took him away.

The Ramallah-based Palestinian Center for Development and Media Freedoms issued a news release demanding the immediate release of Kanawati. In their release, they quoted a Radio Bethlehem 2000 correspondent, Arica Zidan, who was present at his home during the arrest as saying, “10 policemen came to his house at about 9 p.m. yesterday evening, and they had a search and arrest warrant. They pushed his mother to the ground, seven of them attacked, handcuffed and arrested him." The statement continued that Zidan saw him the following morning in front of the Office of the Public Prosecutor and noted, “He was beaten during the interrogation, she noticed a blue sign under the eye.”

The Palestinian Journalists Union issued a statement condemning any violations to the right of expression and specified the arrest of Kanawati, noting that they are working on his release. Mohammad al-Laham, union member from Bethlehem, said in the statement that the arrest was not in accordance to legal procedures and that settling such issues must be done in court and not at the hands of members of the executive branch.

Two days later, Kanawati was released. He obtained a medical report for his condition and filed a lawsuit against the director of the Bethlehem police.

Kanawati’s case coincided with that of another journalist in Tulkarm who was arrested and thrown in prison, as described in a press release issued by his employer Wattan TV and obtained by Al-Monitor. Sami al-Sai was summoned by phone to come to the Preventative Police station and, according to his employer, was thrown in a “dungeon” and kept for 12 hours before being released.

The double arrest within one week led Palestinian journalists to hold a protest outside the Palestinian prime minister's office and demand an investigation into the deterioration of freedom for the press.

Palestinian troubles with their own government and security forces reflect a retraction in political freedoms and a lack of willingness to use judicial means to resolve conflicts over what is said or written in the media. Journalists such as Mohammad Abu Arqoub have argued in published columns that the violations of the freedom of the press, as expressed in the actions of the Palestinian police, have increased because of the lack of willingness by the Palestinian Journalists Union to act decisively to stop it.

For years, Palestinian journalists have had to face physical and administrative abuse from Israeli occupation forces. Now the same journalists are facing challenges from the Palestinian government, which is hardly in full command over Palestine and the Palestinians. Many are worried that this is a bad indication of the state of the press, and political freedoms in general, once a sovereign Palestinian state is established.