Following the ouster of President Mohammed Morsi and the arrest of Egyptian Brotherhood leaders, the "Muslim Sisterhood," the female branch of the Brotherhood, has taken on a more prominent political role. 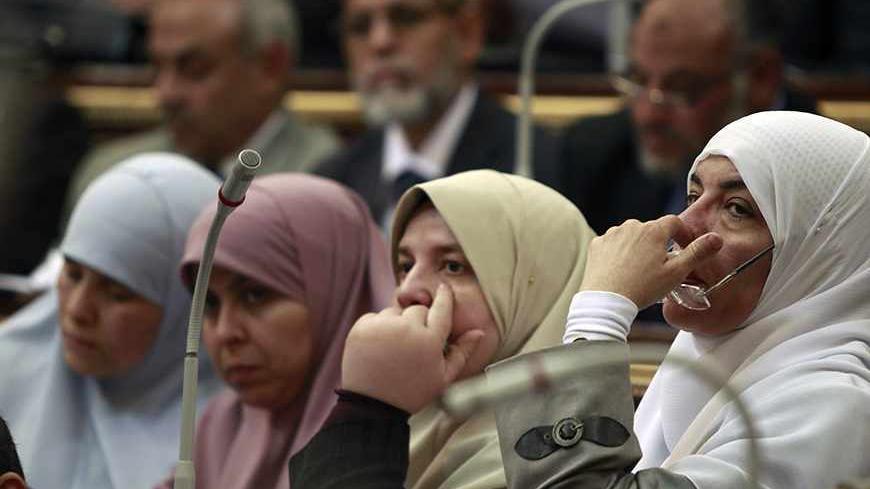 Female members of parliament, who are also members of the Freedom and Justice Party of the Muslim Brotherhood, attend a parliament session in Cairo, Feb. 26, 2012. - REUTERS/Amr Abdallah Dalsh

The Muslim Sisterhood, which remains under-reported, is a wing of the Muslim Brotherhood. But is it an organization that has a weight similar to that of the Brotherhood, or does it merely support the Brotherhood in times of need?

The Muslim Sisterhood was established six years after the Brotherhood’s formation, on April 26, 1933, in the Egyptian city of Ismailiya. The founder of the Muslim Brotherhood, Hassan al-Banna, came up with the idea and wanted to call it the “Muslim Sisters Group.” According to the Brotherhood’s official website, Banna wrote a letter to the members of the Muslim Women’s Association and discussed the importance of women’s role in society, and the leeway that Islam gave them to serve their community. Labiba Ahmed was appointed as head of the Sisterhood.

Wafaa Mashour, a Freedom and Justice Party member of parliament in Egypt’s former Shura Council and a prominent leader in the Muslim Sisterhood, told Al-Monitor that the aim behind forming the branch was to raise girls on the values of Islam to be good wives and mothers in their community. The role of women was limited to social work and preaching. They would organize religious lectures for girls and participate in community service work such as sheltering poor families and contributing to the eradication of illiteracy.

However, women in the Sisterhood had to integrate into political work due to the conditions that Egypt was undergoing. Although the Sisterhood did not turn into an organization as weighty as the Muslim Brotherhood, the work of women was organized, well-planned and far from erratic. They participated in many demonstrations organized by the Brotherhood to protest against the internal situation in the country or express their rejection of foreign policy matters — on issues such as the war in Iraq and the war on Palestinians. Moreover, they ran in the 2005 and 2010 parliamentary elections on behalf of the Muslim Brotherhood.

Mashour noted that the Jan. 25 Revolution [2011] was considered a new phase in the course of women’s work. The role of the Sisters appeared on a larger scale in the Brotherhood when they gathered in Tahrir Square — just like men — to demand the fall of the regime of ousted Egyptian President Hosni Mubarak.

Afterward, the role of the Sisters was further highlighted when they ran for parliamentary elections under the umbrella of the Freedom and Justice Party, the political arm of the Muslim Brotherhood. Many Sisters such as Azza El Garf won seats in parliament.

According to Ibrahim al-Hudaybi, an Islamist researcher and former member of the Brotherhood, the preoccupation of the Sisters in political work holds another meaning. He believes that the female political participation that followed the Jan. 25 Revolution did not emanate from a shift in the mind-set of the Muslim Brotherhood. This is because the role played by women was limited to doing the work they were asked to do. Women do not participate in decision-making within the organization, as shown by their inability to be members of the Guidance Office. According to Hudaybi, the Brotherhood is still a closed-minded organization. If it were not for the current situation, the organization would not have allowed their female members to protest in squares, take to the streets and be subject to beatings, arrests and sometimes killings at the hand of security forces.

Speaking to Al-Monitor, Hudaybi attributed the female predominance on the current political scene within the organization — shown by the fact that women are staging protests and forming popular anti-coup movements — to the political situation, which compelled women to take on the role of men since the majority of the organization leaders are in prisons.

Rasmiya, the former chairwoman of the Women’s Committee in the Freedom and Justice Party, spoke to Al-Monitor and asserted that decision-making among the Muslim Sisters is highly independent of the Muslim Brotherhood’s Guidance Office and the Supreme Guide. The Sisters refer to them merely for advising purposes. In addition, the organization did not ban its female members from political participation.

She added that the ideology of the organization has not changed, since it is derived from Islam, which allows women the freedom to take decisions according to the priorities of the situation.

“Prior to Jan. 25, we used to take to the streets on our own, as an [independent] organization. Women's participation was not needed as it is now. Back then, women participated as much as the political situation in Egypt allowed. They supported the parliamentary and Shura candidates and the elections of student unions. Following the revolution, Egyptian society changed and was at high boil. Protests were ongoing, which aroused the need for the participation of women in this change,” Rasmiya noted.

In addition, she pointed out that the Brotherhood has increasingly relied on women following the June 30 protests and the arrests of a large number of Muslim Brotherhood leaders. It has become a duty for the Sisters to lead the protests. This is why they formed many movements such as “Women against the Coup” in protest of the ouster of former President Mohammed Morsi and “Girls Ultras Azhari” against the way security forces dealt with university students.