The launch of the moderate “Zamzam” Islamists organization presents a challenge for the Muslim Brotherhood. 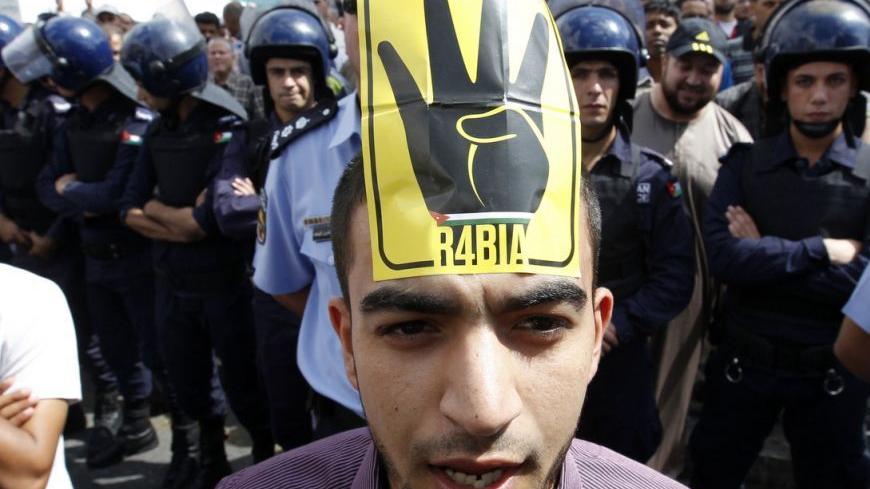 A supporter of Jordan's opposition parties wearing a sign on his forehead shouts slogans demanding freedom for political prisoners, political and economic reforms, and access to government corruption cases during a demonstration after Friday prayers in Amman, Oct. 4, 2013. - REUTERS/Muhammad Hamed

Jordan’s Muslim Brotherhood movement is facing its most serious challenge since it was first established as a charitable organization in the 1950s, with the Oct. 5 launch of the Zamzam Initiative by leading moderate Muslim Brotherhood figures. The event was attended by high-ranking Jordanians including former prime ministers and ministers, deputies and media personalities. The launch, which comes after two years of deliberations, was boycotted by Muslim Brotherhood officials, who had warned followers not to be associated with the initiative.

Although no mention of the Muslim Brotherhood was made during the official release, it was clear that the initiative projected a reformist vision by moderate Islamists inside the movement. Rahil Gharaibeh, the initiative’s architect and official spokesman, told Al-Monitor that one of the objectives is “to renew the Islamic discourse and present Islam as a cultural framework that encompasses the nation while emphasizing religious, sectarian, political and racial pluralism.”

The political project of the initiative says it seeks to establish a modern civil state on the basis of citizenship, freedom, justice and good governance. This almost secular vision differs markedly from the traditional conservative discourse of the Muslim Brotherhood.

The reform movement is seen as a reaction to a state of political and ideological stagnation and rigidity that has gripped the Muslim Brotherhood for years. Gharaibeh said that the founders would like to follow a different strategy at this stage, by focusing on areas of agreement and compatibility “away from the discourse of hatred and incitement.”

Certainly such a moderate and reconciliatory approach is being viewed with satisfaction by the government and its security agencies. Sources told Al-Monitor that the regime has encouraged the founders to release their initiative, in hopes that it will create divisions and splits inside the Muslim Brotherhood.

Minister of Political and Parliamentary Affairs Khaled al-Kalaldeh told Al-Monitor that the Zamzam Initiative cannot be viewed as dissidence, but “as an attempt by young activists within the Islamic movement and outside it to establish a national front for political and economic reforms.” He said the government maintains an equal distance from all political currents and parties.

The initiative is being proposed as a political project open to all Jordanians. It emphasizes national priorities and calls for inclusive reforms from within the regime and in accordance with the Constitution. As the initiative calls on all political currents to join in a national dialogue, some have suggested that the initiative seeks to “Jordanize” the Muslim Brotherhood and undermine the influence of hard-line Jordanians of Palestinian origin. The majority of the sponsors of the initiative are East Bank Jordanians who support non-confrontational institutional reforms with emphasis on a Jordanian agenda and identity with Islamic reference.

The Muslim Brotherhood and its political arm, the Islamic Action Front (IAF), have spearheaded public protests calling for major constitutional amendments that aim at limiting the powers of King Abdullah II. The movement has boycotted parliamentary and municipal elections, held this year, and has criticized Jordan’s quick embrace of the post-Mohammed Morsi regime in Egypt. But turmoil in Syria and Egypt has eroded public support for the movement in recent months.

Following the military coup in Egypt in July, the government waged a media campaign to undercut the Muslim Brotherhood, but it had stopped short of disbanding the movement. In return top Muslim Brotherhood officials toned down their rhetoric and expressed willingness to establish dialogue with the government and the General Intelligence Department (GID). It is not clear if such dialogue took place. The launch of Zamzam indicates that the regime prefers to seek a divide-and-rule approach rather than disband the movement.

So far the Muslim Brotherhood has not reacted to the release of the initiative. The organization’s No. 2 man, Zaki Bani Rsheid, had announced earlier that the movement will take a watch-and-see approach, but he said that the final decision on Zamzam will be taken by the executive bureau.

That decision will depend on the next step of the Zamzam founders. Initially they suggested that the initiative will be presented to the movement for discussion. But the question now is where to go next? The founders have evaded questions on whether the initiative will eventually evolve into an Islamist political party. Jordan already has a centrist Islamist party called Al Wasat which did surprisingly well in this year’s legislative elections by winning 16 seat in the Lower House.

Still, the long-term effects on the Muslim Brotherhood will be felt. The Zamzam founders will find sympathetic allies in moderate members of the rank and file of the movement. This could manifest itself in a renewed power struggle between the doves and hawks, something that the government will be watching closely.