What, or Who, Killed Yasser Arafat?

The Lancet's suggestion that Palestinian Authority Chairman Yasser Arafat might have been poisoned leaves room for doubt, not only regarding the credibility of the findings, but the motivations behind them. 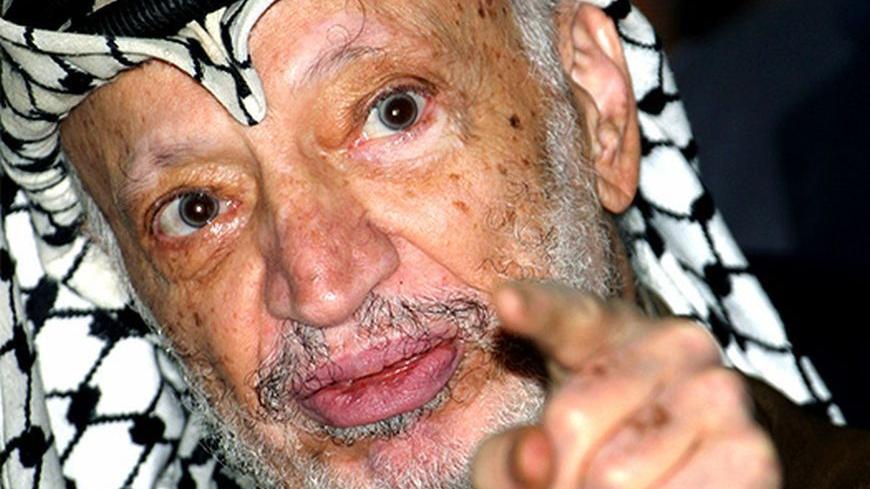 A month and a half before his death on Nov. 11, 2004, I met Palestinian Authority (PA) Chairman Yasser Arafat at the Muqata Presidential Compound in Ramallah. I came to conduct an interview for Israeli television after he had been besieged for many months at the compound, many parts of which had been destroyed during that time by Israel Defense Forces bulldozers. The gradual destruction of the compound, piece by piece, was meant to demonstrate to Arafat that his end was coming near every time Palestinians carried out a terrorist attack in Israel.

Then-Prime Minister Ariel Sharon hated Arafat. He used to call him “the dog in the Muqata,” and longed for his death with all his might. What stood between Sharon and his giving a green light to assassinate Arafat were former US President George W. Bush, the international community and chiefly the assessment of the intelligence community that the assassination of the PA chairman would only further incite the bloody intifada that took place during those years. Sharon chose to imprison Arafat in the governmental compound in Ramallah and humiliate him as much as possible. Sharon believed that Arafat was not only the one responsible for the breakout of the latest round of violence but also worked to encourage and incite the uprising and the suicide bombings that terrorized Israeli citizens.

This was the situation in which I met Arafat. He was sick, tired and delusional. He looked thin, and I initially assumed that the days of siege on Ramallah had left their mark on his face and on his wizened body. He wore his gray uniform and was bedecked from head to toe in medals and victory ribbons, as if he were the general of a great military power. On the side stood the iron bed in which he slept. His appearance was pitiful. He continued to talk with pathos about the “covenant of the brave” he made with late Prime Minister Yitzhak Rabin in Oslo, while the backdrop of ruins all around and the smell of dust in the air were the relics of war and not of peace.

After four hours in his office, my impression was that the PA chairman had lost his sense of time and reality. He rejoiced like a child when Palestinian official Mohammed Dahlan brought him a tray of his beloved baklava pastries from Gaza, from a pastry shop named after him. He invited us, the camera crew and me, to a light supper: pitas, light cheese and the baklava Dahlan brought for dessert. Someone whispered to us that Arafat ate light foods because his health did not allow him to eat more. He could not digest what he ate, it was explained.

A month and a half later, on Oct. 29, 2004, he was flown to the Percy military hospital in France, where he died. Since then, the cause of his illness has been kept secret. Arafat’s medical file has been classified as highly confidential. Only his heir, Palestinian Chairman Abu Mazen, Arafat’s wife, Suha, and a very few others in the PA were allowed to read it and promised to keep its contents to themselves. But the rumors spread.

There is only one disease in the modern era to which society — as modern as it may be — still attaches a stigma to those who suffer from it: AIDS. Dr. Ashraf al-Kurdi, Arafat’s personal doctor — who was removed from Arafat's care in the last weeks of his life — at the time told the authors of the book The Seventh War, Avi Issacharoff and Amos Harel, that he knew that the doctors in Paris found the AIDS virus in Arafat’s blood. But Kurdi felt that he had to defend the leader who died of an “improper disease,” and explained that the virus was inserted into Arafat’s blood to hide signs of poisoning — which was the real cause of Arafat’s death.

Professor Gil Lugassi, president of the Israeli Society of Hematology, claims that all the signs of Arafat’s sickness prove that he suffered from the human immunodeficiency virus (HIV). In confidential conversations — not to be quoted or attributed — I heard a similar assessment from PA leaders.

With this background, it can be understood why in the PA they were so glad to hear about the findings of the Al Jazeera network’s investigation in July 2012 regarding the question of the death of the rais. The report claimed that the radioactive element Polonium 210 was found in Arafat’s clothes, hat and toothbrush — which seemingly proves that Israel poisoned him. Suddenly, from the network so hated in the West Bank, came reinforcement for the thing everyone wanted to believe: Arafat did not die of a shameful disease, but rather Sharon gave the order to assassinate him.

Those same senior Palestinian officials who had previously confirmed to me the existence of symptoms of the illness immediately adopted the findings of the report and said with great relief: “We always knew the rais did not die a natural death, that Sharon assassinated him like he assassinated [Hamas founder Sheikh] Ahmed Yassin, and thus he can be considered a shahid — a martyr.” Polonium 210 retroactively turned Arafat’s death into a respectable death, a death of a martyr.

On the Israeli side, on the other hand, the minister of defense in Sharon’s government, Shaul Mofaz, does not confirm or deny the claim that Arafat died an unnatural death. Other Israeli senior officials of that period — former head of Military Intelligence Aharon Ze’evi Farkash and head of the Israeli Military Intelligence's research division Yossi Kuperwasser — claimed, and still claim today, that Arafat died of a fatal disease without adding any further detail.

For almost nine years now the debate over Arafat's death has produced rumors, legends and various contradictory versions. Leading those who seek to establish the notion of his poisoning is Arafat's widow, Suha. She was the one who gave his belongings to Al Jazeera, and she commissioned a Swiss team to examine the report’s findings — some of which were published on Oct. 14 — and repeated the same conclusions. But while Al Jazeera’s investigation was appropriate and raised many questions to consider, the partial findings the Swiss scientists published raise the suspicion that they are political and hasty conclusions.

Arafat’s body was disinterred at the instruction of Abu Mazen on Nov. 27, 2012, to try provide a more precise answer to the suspicions. The examination and analysis of the samples from his body are not concluded yet, and it is unclear whether an unequivocal answer will be given, even at the end of the process. What caused the researchers to rush and publish partial and old findings that again only touch on Arafat’s belongings? Maybe it was just a desire to be published, maybe there are political reasons and maybe it was the additional pressure Arafat's wife applied leading up to the ninth anniversary of his death.

Anyone who closely reads the findings of the partial opinion published in the British journal The Lancet, which were quoted at length in The Guardian, can understand another important element of the story. The Swiss scientists find it hard to prove that poisoning was the cause of Arafat’s death. They admit that Arafat had a growth in his stomach, and they do not talk about HIV. The word that repeats again and again in the report they published is “possibility”: “The findings could support the possibility that Arafat was poisoned.” Is there such indisputable evidence? No, it is only a possibility. Did Sharon long so for the PA chairman's death that he decided to assassinate him despite international opposition? That is also a possibility. It is too bad that the Swiss researchers did not patiently wait for the final conclusions, which would have given their investigation more serious and professional validity.