Fatah's general congress has ended without discussion of an official investigation into late PLO leader Yasser Arafat's death, though the topic had been expected to be included in the meeting's agenda. 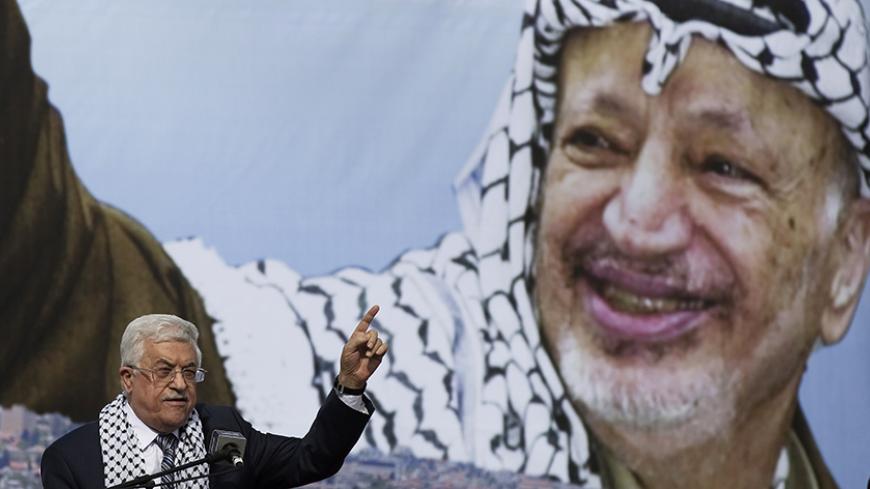 GAZA CITY, Gaza Strip — The Fatah Seventh Congress opened Nov. 29 in Ramallah and closed Dec. 4 without discussing the report by the commission of inquiry into the death of former Palestinian President Yasser Arafat, as some Fatah figures had anticipated.

Fahmi al-Zarir, the spokesman for the congress' preparatory committee, said Nov. 24, “The report by the commission of inquiry into Arafats' death will be discussed during a private session at the Seventh Congress, and it was added to the agenda.” The meeting, however, did not happen, and the final statement of the congress made no reference to Arafat's death.

Donia al-Watan reported Dec. 1 that a dispute had erupted on the first day, when the agenda distributed to participants did not include discussion of the report. The conflict arose most notably between Maj. Gen. Tawfiq Tirawi, the head of the commission of inquiry into Arafat's death, and the congress chairmanship.

Congress spokesman Mahmoud Abu al-Hija spoke to Al-Monitor about the report being left off the agenda. He said, “The report was not initially on the agenda because the investigation into the case is not over yet. Once completed, it will be shown to the Fatah leaders and Palestinian public.”

Hija said, “The congress' preparatory committee has not obtained the report on Arafat's death yet to be able to add it on the agenda, due to technical procedures in the investigation process.” He pointed out that any participant in the congress has the right to put forward an objection to the agenda.

Tirawi told Al-Monitor he refused to comment because he is angry at the congress for failing to discuss the report.

Amin Maqboul, the secretary-general of Fatah's Revolutionary Council, had another version of the story. He told Al-Monitor, “During its Nov. 18 meeting, Fatah’s Central Committee discussed the latest findings of the investigation into Arafat's death and found nothing worth mentioning in the case. It concluded that there is no need for the issue to be discussed in the congress’ meetings.”

Maqboul’s statement contradicts Palestinian President Mahmoud Abbas’ Nov. 10 statement. At a rally commemorating the 12th anniversary of Arafat's death in Ramallah, Abbas said, “I know who killed Arafat. Yet my testimony alone is not enough. You will be shocked when you will find out who did it.”

Abbas, added, “The Palestinian commission of inquiry has made great strides in the search for the truth, and we will reveal the final results to our people when reached.”

Abbas' statement prompted dismissed Fatah leader Mohammed Dahlan to respond. He posted on Facebook Nov. 12, “The cheap exploitation of President Yasser Arafat’s martyrdom should be halted immediately. The time has come to put the investigative dossier in its legal context, to unveil all mysteries in the era’s major crime, rather than occasional prejudiced manipulation and exploitation of the issue. … It is a shame to keep silent for someone like Mahmoud Abbas, who claims to know the perpetrators of such a major crime.”

Maqboul explained that Abbas had meant what former Jordanian Information Minister Saleh al-Qallab wrote in a Nov. 14. article in the Jordanian al-Rai. Qallab said that Abbas received new and important documents proving who killed Arafat, but it is up to the commission of inquiry to announce its findings.

Israeli Channel 10 reported Dec. 4 that it has obtained an internal document from the commission stating, “Abbas’ main rival, namely Mohammed Dahlan, is the one who, via a foreign delegation, sent the pillbox that was replaced with poison to Arafat at Percy military hospital on the outskirts of Paris.”

Ashraf Jumaa, a leading figure in Fatah’s reformist current, told Al-Monitor that the commission's report was left out of the meeting to keep the findings veiled.

He said, “Not only did the participants to Fatah’s Seventh Congress want to learn about the investigation’s findings, but all of the Palestinian people as well.” He was shocked that participants at the congress accepted the omission of the report. While Palestinians in general are convinced that Israel is behind the death, there are doubts about who delivered the poison to Arafat.

Political analyst Mohamed Hawash told Al-Monitor that it is more likely that the Palestinian commission of inquiry failed to find conclusive evidence about Arafat's death, despite the rumors circulating that the commission has in its possession new and important information. He pointed out that ongoing Palestinian accusations that Israel was behind Arafat's death do little to settle the matter without evidence.

The Palestinian commission of inquiry, which was formed Sept. 19, 2010, has not announced any findings in the case, although from time to time it has claimed that it has found new evidence for the cause of Arafat’s death.