Palestinians are not surprised by the findings of the Swiss forensic report that the late PLO leader Yasser Arafat's body contained high levels of polonium. 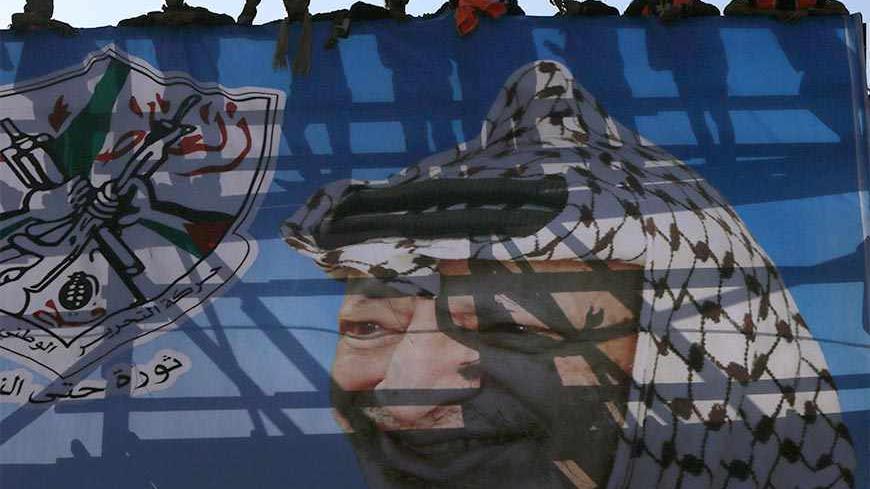 Palestinians stand on a stage with a poster depicting late Palestinian leader Yasser Arafat during a rally marking the 48th anniversary of the founding of the Fatah movement, Gaza City, Jan. 4, 2013. - REUTERS/Suhaib Salem

Few Palestinians were surprised when a Swiss lab showed that the remains of late Palestine Liberation Organization (PLO) leader Yasser Arafat contained a high quantity of polonium. No protests are expected and nothing seems different outside the Palestinian headquarters in Ramallah.

Arafat spent his last days at those headquarters in Palestine before being taken, dressed in pajamas, by a Jordanian army helicopter to Amman in October 2004, then flown to a military hospital outside Paris, only to return in a coffin and be bid farewell for the last time by tens of thousands of grieving Palestinians.

The reason few Palestinians were moved by the widely publicized news about Arafat’s probable cause of death is simple: Most Palestinians had already reached the conclusion that their leader, who had been holed up in his headquarters and surrounded by Israeli tanks, did not die a natural death. Arafat’s family, including his nephew Nasser al-Qudwa, who was the PLO’s representative to the UN, and senior PLO officials, including the usually reserved Nabil Shaath, have repeatedly insisted in public that the founder of modern-day Palestinian nationalism had been assassinated by poisoning of some kind.

What Palestinians and the world want to know is not whether Arafat was killed, but who caused his sudden and mysterious death and how. Experts in the Swiss lab, whose detailed 108-page report was outlined on Al Jazeera, state that death by polonium requires the killer element be taken into the body. In other words, someone had to have placed it in Arafat’s food or injected it into his body. This means that the circle of individuals who are potential targets of any investigation can only be those officials who were with or met with Arafat in his last days in Ramallah.

This fact more than any other explains why the Palestinian leadership is so sensitive about the recent news, just as they were a year ago when Al Jazeera aired a TV investigation that included testing of Arafat’s clothing and toothbrush, made available to scientists by his widow, Suha.

Back then, as now, PLO officials were quick to state that the investigation into Arafat’s death is still an open file, and President Mahmoud Abbas immediately agreed to his widow’s request that his body be exhumed. Tawfiq Tirawi, the former head of Palestinian intelligence and the chair of the committee investigating Arafat’s death, stepped up his involvement and has called for a news conference to update the public with the latest information. Arafat's widow has declared that she will leave no stones unturned until the killer is brought to justice, hinting it might have been someone in his close circle.

Palestinian officials, including Saeb Erekat, have indicated that the leadership is considering pursuing an international investigation, similar to the ongoing investigation into the assassination of former Lebanese Prime Minister Rafiq al-Hariri. However, PLO official Sultan Abu Enein did not confirm this would be the direction they would take.

While news of the results of the lab results have made headlines the world over, Palestinians have remained at home, choosing to follow the story quietly, knowing deep within themselves that what their leadership has said about Israel’s responsibility for Arafat's death remains the most credible of all theories. Israel, which has had no problem in quietly — and sometimes not so quietly — confirming its role in the assassination of senior PLO leaders in Beirut, Tunis and European capitals over the years, has consistently denied any role in this case. Before his death and in the years of the second intifada, public statements by then-Deputy Prime Minister Ehud Olmert and  Prime Minister Ariel Sharon welcomed the disappearance of the PLO leader.

Suha Arafat told the BBC that Arafat had many enemies. If the Swiss report said there is an 83% chance that Arafat died from polonium poisoning, then most probably the killer is still roaming around as a free person. This is what troubles Palestinians most.