The Turkish media's response to the nation's first "halal" online sex shop has been a mixture of criticism and ridicule. 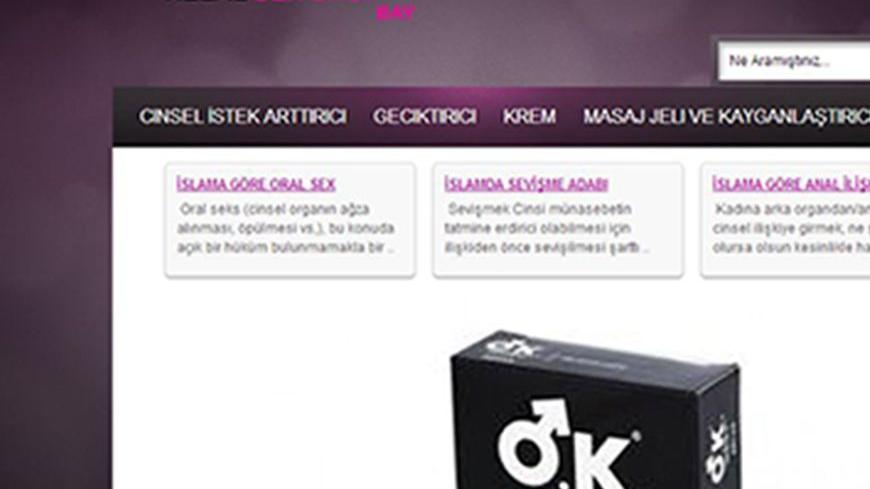 A screenshot from the website for Turkey's first "halal" sex shop displays its wares. - bay.helalsexshop.com

Then, an even more lurid story emerged: Three years after the "halal" online sex shop opened in the Netherlands, Turkey got its "halal" sex shop on the World Wide Web. ("Halal" refers to everything that is lawful and permitted in Islam.)

A quick browse through "Helal Sex Shop" shows a modest interface, an affordable range of products (that is, nothing too kinky) and, of course, separate entrances to the site for men and women. The e-halal-sex-store also offers a few advice columns for those who want to enjoy the pleasures of this world without jeopardizing their chances for the next.

But reactions on social media, as well as the coverage and commentaries in the news media, have been stranger than the e-store itself.

Social media users responded to the news about the "halal" sex shop with a mix of ridicule and disbelief. "Is this real or Zaytung?" some asked, in reference to Turkey’s leading parody news website. Others, betraying a sense of foreboding, wondered what was next. Many cracked predictable jokes about this cream or that sex toy and their compatibility with Islamic law. The more creative types argued how the "halal" store could foster "exports," "franchises," and "a much-needed new Turkish opening to the Middle East."

News outlets also had mixed reactions. The Radikal newspaper’s Tayfun Atay struck a healthy balance between the analytical and the light-hearted. Atay reminded his readers about the importance of sexual fulfillment in Islam but then joked about why some of the products did not have more religious-sounding names. Importantly, he pointed out how the "halal" sex shop is a continuation of a long procession of "Islamized" pop culture items. "If we get an 'Islamic reality show,'" said Atay, "it’s normal to have a 'halal' sex shop."

Unlike Atay, Hürriyet columnist and CNN Türk commentator Ahmet Hakan lamented the latest example of Islamic entrepreneurship: "They made up something called Islamic fashion, then an Islamic fashion show, then an Islamic hotel, then an Islamic holiday, and finally Islamic literature," ending his tirade with an anecdote: "In the old days, whenever we fancied something, my father would ask, ‘Why don’t you miss out on that?’" Coming from Ahmet Hakan, it was a surprising reaction: Hakan had begun his career in the 1990s as a news anchorman on the Islamist TV station Kanal 7 but has adopted a more secular life-style since.

Elsewhere, much of the religiously conservative press, including the generally-progressive Zaman and Today’s Zaman, which are affiliated with the highly influential theologian Fethullah Gülen, were silent.

Interestingly, the Kemalist media that took a more hostile tone against "Helal Sex Shop." The website of the TV station Ulusal Kanal, which caters to Turkey’s dwindling old-school secular nationalists, announced the sex shop with a semi-shocked title that read "This Also Happened!" The website of the Aydınlık newspaper, which appeals to a similar audience (albeit with a Maoist bend), jested how "the toys" on "Helal Sex Shop" are probably "blessed with prayers."

These reactions reveal two issues: First, despite Turkish society’s conservatism on matters of sex, sexuality, the female body, and religion, that no one has threatened the owners of the "halal" sex store with a lawsuit (or worse) is good news. Finally, Turkey seems to be developing a more tolerant streak toward that which is different.

The second point, however, blunts the first one: Much of the negative reaction to the e-helal-sex-store shows how, at the basic level, religious and secular segments of Turkish society share much more in common than they would like to think. A female TV show host recently lost her job because a high-ranking member of the ruling party disliked her décolletage. Meanwhile, an MP from the secular opposition party is attempting to reverse the liberalization of the wearing of Islamic headscarves in government offices.

It’s clear that Turkey’s political and cultural elite still have not completely adopted a liberal outlook in full, a problem which reflects on common folk. People in Turkey, from the most religious to the most secular, have yet to accept that, unless a person’s behavior, dress, or speech presents a clear and present danger to the well-being of other individuals, there should be nothing that prevents that person from behaving, dressing, and speaking the way she wants.

As an Al-Monitor contributor pointed out, Turkey has its fair share of liberals, Islamic and secular. But the reactions to "Helal Sex Shop," décolletage and Islamic headscarves show that liberalism has a long way to go before it becomes a force to be reckoned with in Turkish politics.