The Syrian government and opposition are refocusing their strategies after UN Security Council Resolution 2118. 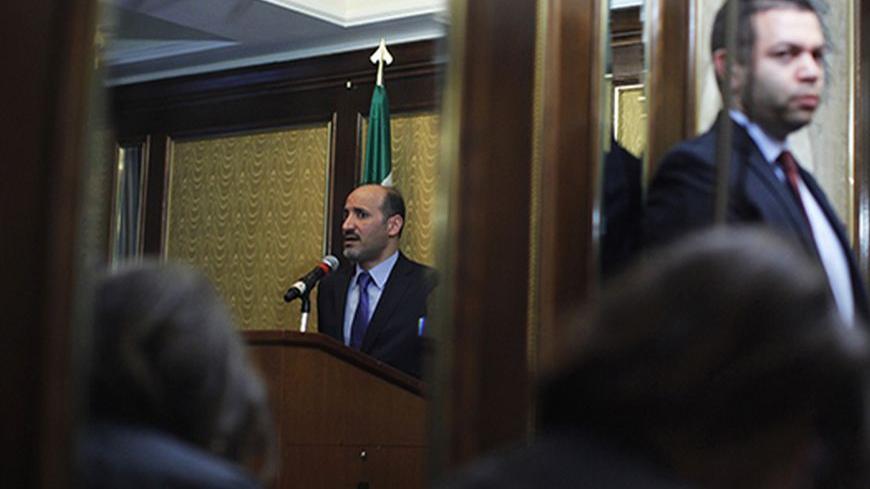 Ahmad Jarba, head of the opposition Syrian National Coalition, is seen reflected in a mirror at a news conference about chemical weapons in New York, Sept. 27, 2013. - REUTERS/Eduardo Munoz

Disarray, confusion and demoralization are the three words that best describe the state of the Syrian opposition forces in the aftermath of the avoidance of the US military strike and the peaceful settlement of the chemical weapons crisis. For certain people, that episode is reminiscent of how former Libyan President Moammar Gadhafi — though under different circumstances — was able to exchange the assurances of his survival via barter diplomacy, and thus get rid of his pariah status. He did so by signing the Chemical Weapons Convention and by adhering to the Organization for the Prohibition of Chemical Weapons.

For Syrian President Bashar al-Assad, it was considered a way to buy time, a very precious commodity. The settlement of the crisis, or the beginning of it, via UN Security Council Resolution 2118 led to a sort of demobilization of US escalatory diplomacy. Such diplomacy was strongly supported, not only by Syrian opposition factions but also by regional friends who invested in its great expectations.

For them, it provided the opportunity to change the rules of the game and accelerate the change of the Syrian regime. What added to this trilogy of feelings mentioned here, was the US-Iranian opening and fear of the implications of such opening — if successful — on the future of the Syrian crisis. From an analytical point of view, it looks like the opposition's regional friends have indicated through various diplomatic means their frustrations and unhappiness with the US policy.

The Syrian National Coalition (SNC) was also split between those willing to go to Geneva II under certain conditions, and those who considered it impossible under the new power balance resulting from the US-Russian understanding. Thus, the conditions presented by the SNC to go to Geneva, including the assurances that Assad would be evicted, did not reflect the reality of the power balance.

With these conditions, they went beyond the transformative process as stipulated in Geneva I, at the end of which the change would occur. Indeed, the SNC has been asking for Arab and Islamic guarantees to reach the result that they expect during the Geneva process, before they accept to engage in it.

Of course this guarantee could not be given by parties that could not deliver on the issue. As mentioned earlier, many of them are unhappy with the United States shifting diplomatic gear, as noted by a keen observer of the Syrian crisis. But the important and indicative development has been the coalition, or the merger, that was formed by numerous small armed combatting Islamist factions under the name of the "Army of Islam."

Its first declaration was the refusal to recognize the SNC as representing the Syrian revolution. These small merging groups already had the support and backing of key regional supporters of the revolution. Most of them also support the SNC. The first victim of that newly created coalition was, indeed, the SNC. It greatly damaged its credibility, when conducting its diplomatic offensive at the United Nations General Assembly in September.

The second victim was the SNC's ally, the Free Syrian Army, which was rejected by the Army of Islam on an ideological basis.

The creation of the Army of Islam is also sending many signals in different directions; first and foremost the radicalization of actions and discourses. The frontline discourse on the ground is no longer a national one. It is now a Sunni radical sectarian discourse in a multisectarian society, with all the repercussions on the configuration of power and internal and external alliances. This large Salafist majority coalition acting within the national framework of Syria, in a sort of national Salafist movement for the moment, is also opposed to the international al-Qaeda-affiliated Salafist jihadist movement of the Islamic State of Iraq and al-Sham (ISIS).

Syria is a launching pad and boxing ring to fight the kuffar (infidel) for ISIS. Thus, this triangulation and increased consolidated fragmentation of the opposition forces is reshuffling many cards at the expense of the moderate national Syrian opposition — be it at home or abroad.

On the other hand, the feeling that the chemical weapons crisis was successfully managed to meet its interest, with an increasing divide and fight among the opposition forces, is encouraging the regime to become more intransigent. This is expressed in the way it is formulating its conditions for the convening of Geneva II.

Hence, one thing is sure and around which converge the policies of the two enemies at home — the regime and the opposition — to formulate conditions that render Geneva II difficult to convene.

The date for Geneva II can not be decided ahead of time, independently of the unfolding course of events. It has to wait for a specific moment. A time when the two superpowers, bringing with them their regional friends, will forge a consensus on the respect and abidance of the road map to solve the crisis — a difficult but not impossible task. Then, and only then, the date for Geneva II can be set — and with it the launching process of saving Syria, both state and society, from disintegration — and with it, saving the region from instability and chaos.